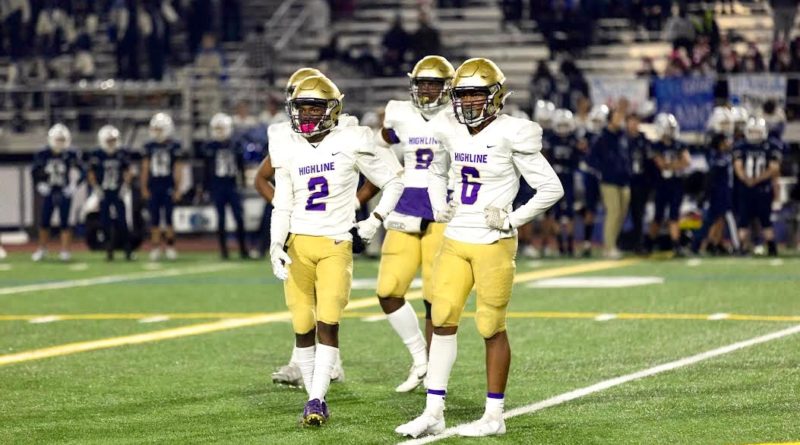 Deontae Cooper thought he was at the end with football.

He was an all-state running back at Citrus Hill High School in California before enduring an injury-plagued, up-and-down career at the University of Washington before finishing up with his best season as a transfer to San Jose State.

Fortunately, former UW teammate Michael Kneip talked him into coaching with him at Bellevue High School, which led to Cooper taking over his own Seattle-are program – Highline High School.

The Pirates’ rebuilding effort has been nothing short of mind-blowing: Cooper has gone from hosting five teenagers in his first players’ meeting in 2019 to leading the school to its first state berth into the Class 2A tournament.

“This is a pretty good … diverse school,” Cooper said. “I was surprised they didn’t have a tradition of being good.”

Cooper made an effort not just to be seen in the hallways, but create excitement. He also hired a staff full of ex-UW teammates, notably Anthony Berg and Sione Potoa’e.

In Cooper’s first season, the Pirates played in the third division of the 2A SPSL. And last spring, they played a limited 2A KingCo schedule.

This fall, the team with 40 players has found a new gear, led by dynamic sophomore wide receiver Marquawn McCraney, whom Cooper thinks will develop into a big-time FBS recruit. It is a starting offense with just one senior – right tackle Noah Harder – full of explosive athletes everywhere.

They not only won the 2A KingCo title, they now face Squalicum in their first-ever state playoff game.

“We’ve reminded the kids, ‘Nobody has worn purple and been in this environment.'” Cooper said. “We are welcoming this together.”

What to watch for: Huskies like running old-school power right at you, and have two juniors who bring the pop in RB Sonny Asu and FB Julian Alegria, But this version of the Sentinels is built to hold up with physical defensive front, and unleashing shifty RBs Deandre Napier and Jaycion Cain on turf with decisive speed advantage could be the difference.

What to watch for: Interesting across-the-state showdown between a program that has set state passing records out of the spread attack (Hilanders) – and a team that recently switched to the spread (Vikings), igniting QB Colton Bower’s school-record passing run. Two-time 2A GSL champions have size, and getting DB Liam Johnston (shoulder) back would be big boost in trying to slow down all-state performer.

What to watch for: Even though it’s a rematch of the 2018 state semifinals (31-0 Lions’ win), these two underclassmen-loaded programs are in different formative stages this fall. Fife will need to play a near-perfect game to pull off an upset – and has a defensive front that can get stops, and a Wing-T rusher in RB Roy Lockley that gets hard yards. But Lynden has a few more playmaking gears – and better speed to make it happen.

What to watch for: The 2A GSHL champions are clear favorites, but are facing an opponent from the 2A SPSL that doesn’t commit many mistakes – and should make them earn it. Expect the running backs – Orting’s Aidan Herd and Ridgefield’s Davis Pankow – to be utilized heavily, especially between the hashes. The question is what will happen when the Spudders attack the perimeter? WR Ty Snider and company should feast.

What to watch for: Coach Nick Lucey feels this is one of the best defenses he’s ever had at Squalicum – and the Storm will need it trying to hold down QB Ronan Rasmussen and this aggressive, multi-faceted offense. But the Pirates (or the rest of the state) haven’t seen an offensive backfield quite like this one in speedy dual-threat QB Leyton Smithson and all-state RB Djouvensky Schlenbaker, who are big plays waiting to happen.

What to watch for: This should be quite the tussle between league runners-up. Ball-control Enumclaw loves feeding RB Emmit Otero to set up the big-play capability of WR Dylan Watterson. Since the Hawks’ 35-0 loss to Ridgefield, the two-time 2A champion have reeled off seven wins in a row (outscoring opponents, 324-60) – and will want to turn this matchup into a scoring spree on the speedway.

What to watch for: Also a cool moment for the Knights, who went winless in 2018, and notched one win a year later when the Thunderbirds won the 2A title. Credit goes to a persevering group of 10 seniors, and high-volume, do-everything sophomore QB Diezel Wilkinson, who had never played the position until this fall (he’s been a tailback and receiver). But Tumwater is as healthy at its been all season – and wants to stay that way.