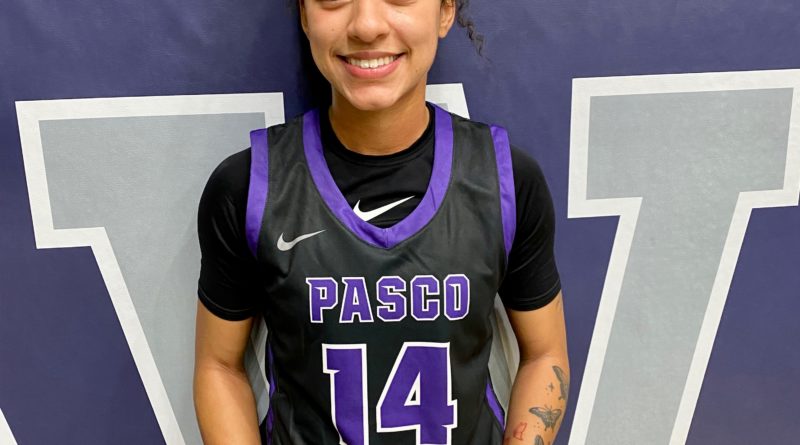 PASCO – Pasco High School girls basketball coach Aaron Barcot looked over at his bench late in the first half Friday night in a key game against crosstown rival Chiawana.

What he saw was two of his big three star seniors — Taija Mackey and Taleya Maiden — sitting there in foul trouble.

“I was terrified,” Barcot said. “Terrified!”

Lucky for him, though, the Bulldogs’ other star senior — guard Mya Groce — was still out on the floor.

Groce scored a game-high 28 points and was a calming presence the entire 32 minutes, leading visiting fifth-ranked Pasco over No. 7 Chiawana, 62-50.

“I’m not sure I’d call it feeling pressure,” Groce said. “But I knew there was going to be some pressure.”

With the victory, Pasco is now 6-0 in Mid-Columbia Conference play, and 9-0 overall.

“Without question, Mya is probably the best player in this league,” Barcot said. “And I believe in my heart, she is one of the best in the state. I’d put Mya Groce out there against anyone as long as I live.”

When Mackey — who has been a double-double machine much of her four-year career at Pasco — left the court with her third foul with 4:58 to go in the first half, the Bulldogs had a 15-11 lead.

Chiawana answered with a 6-0 run before the Bulldogs settled down.

And even when Maiden picked up her third foul with 3:12 remaining before intermission and the game tied at 19-19, it was Groce who helped her team maintain composure. The senior sank four free throws and dished off an assist to Mireyah Lopez for a 3-point field goal.

Chiawana coach Mike Brown admits it was a key opportunity his Riverhawks missed with Mackey and Maiden sidelined.

“We are young, and we have a lot of teaching to do as coaches,” Brown said. “In that instance, we’ve got to work the ball into the post better.”

And the young star led the Riverhawks with 24 points, 14 rebounds and four blocked shots.

But Barcot praised the play of sophomore post Da-Jaiah Stell, who came into the game and did a yeoman-like job of helping deny Ruud the ball during those late minutes of the first half.

In the third quarter, Chiawana ninth grader Kaia Foster came off the bench to sink three consecutive treys, giving the Riverhawks the lead at 35-34 going into the final quarter.

And that’s where Groce’s killer instinct took over.

She scored 13 points in the final eight minutes — including scoring seven points in a 9-0 run to put the game away. Groce added seven rebounds, three steals and three assists for the night.

Despite the foul trouble, Maiden finished with a double-double of 14 points and 10 rebounds.

It was the end of a highly-emotional evening. The Bulldogs were facing one of their old teammates, A’niyah Heavens, for the first time in two years.

Heavens had started with Groce, Mackey and Maiden at Pasco for both her ninth grade and sophomore seasons. But she transferred to Chiawana before her junior season, in which she sat out, and is the starting point guard now for the Riverhawks as a senior.

“She and I have played together for years” Groce said. “I was nervous and emotional. But I think our nerves, as a team, settled down in the second half.”

For Brown, the two glaring stats were Pasco’s 18 offensive rebounds, and the 24 turnovers his team had that the Bulldogs turned into 20 points.

“We knew coming into the game it was going to be physical,” Brown said. “But we have another chance at them (in a few weeks).”