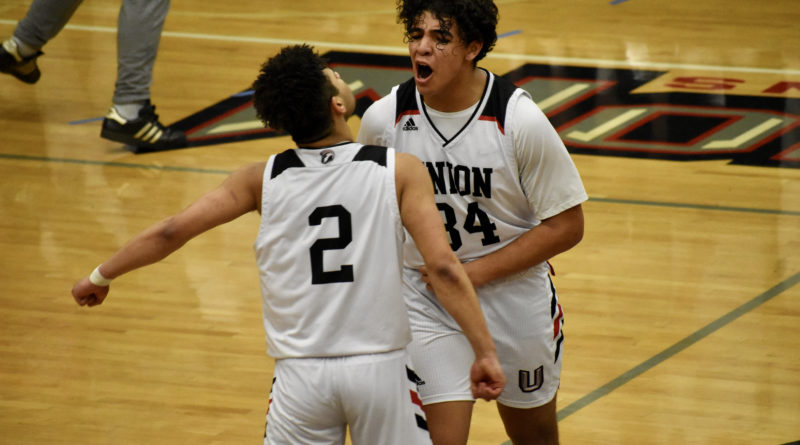 VANCOUVER — An unfamiliar energy buzzed out of Union High School’s gymnasium on Wednesday night. Clad in white, the Titans’ home student section buzzed as and Camas fans, dressed in spilled out of the baseline double doors into the entryway as cars overflowed the parking lot.

It was a packed high school gym fitting of the rivalry between undefeated 4A Greater St. Helens League neighbors at a time when restrictions are being reintroduced to varying degrees around the state amid the surge of the COVID-19 Omicron variant — some districts around the state even moving to limit or exclude fans.

Players welcomed the atmosphere, even if they were a bit caught off guard.

“This was by far the biggest crowd we’ve had … I thought it was amazing to have all the fans come out, students come out,” Union forward Yanni Fassilis said. It was a lot of fun.”

Added Camas coach Ryan Josephson: “It was nice to have it back. You know you’re in a good game when players can’t hear you when you’re yelling at the top of your lungs.”

The 6-foot-4 Fassilis, a junior transfer from Washougal, finished with a game-high 22 points, 13 rebounds and six blocks. Porter Hill added 20 points and Evan Eschels chipped in 18 for the Titans, the No. 4 team in SBLive‘s most recent 4A power rankings.

No. 7 Camas was paced by 16 points from Carson Frawley and 14 from freshman Beckett Currie, who hit four 3s.

With the win, its fifth in a row after dropping consecutive holiday tournament games without point guard Bryson Metz, Union (10-3, 3-0) holds a familiar spot atop the 4A GSHL. Camas moves to 7-2 in his first game in nearly two weeks. The teams rematch Feb. 8 at Camas in the last league game of the season.

In the exact opposite fashion of when the Titans hosted Mount Si, SBLive‘s No. 1 4A team in Washington, on Dec. 11, they trailed for the majority of the game, but did enough to hang around.

Camas led 48-47 after three quarters, but Union outscored the Papermakers 25-12 in the fourth. Fassilis hit a pair of free throws to extend the lead to 11 with under three minutes left and two transition buckets from Eschels put Camas away.

Defensively, the Titans did let Camas get many open looks.

“A lot of people thought we were going to come out of our zone because this is a really good shooting team,” Fassilis said, “but we stuck with it and did everything our coaches taught us, and it worked out for us.”

Fassilis gave credit for pulling away to the second half play of Hill and Eschels. Metz, a senior point guard and Union’s heralded leader, scored all eight of his points in the second half.

For much of the night, Camas never had a shot attempt at the rim go uncontested. Often times, layups and floaters were swallowed up by Fassilis’ long reach in the center of Union’s zone.

A key to the success of Union — no longer the small, hot-shooting teams that have lit up the state in recent years — defensively has been the implementation of a 2-3 zone. Fassilis has been a quick study, having played some zone at Washougal under head coach AJ LaBree as an underclassman.

“Yanni’s dominant in the paint,” Josephson said. “He’s been a huge addition for them, watching them over the summer and seeing how he has added a whole new dynamic through the season, they really are much more imposing with his presence. It’s not just him, that back line is huge.”

He’s right. The emergence of seniors and first-year starters Evan Eschels (6-foot-5) and Porter Hill (6-4) as key role players collapsing the interior defensively and picking up scraps in the half court offense and in transition have been key for Union.

The three forward combined for 60 of the Titans’ 72 points Wednesday night.

Eschels, also a defensive end on the football team has been perhaps the biggest surprise. As he’s learned to utilize his size and athleticism, his confidence has grown. On Wednesday night, he hit Union’s only 3-pointer and showed a smirk after swatting a shot into the brick wall behind the baseline to end the first half.

“His jump from junior to senior year has been one of the biggest jumps I’ve ever seen,” Metz said. “His confidence has been off the roof.”

Josephson knew he had something special before the season started in freshman Beckett Currie. The 6-foot guard, who has attracted attention as a prospect, factored into the lineup immediately, but has much of the early part of the season fighting to get back onto the floor.

In a hostile gym Wednesday night, he shined in his first big game, hitting three of his four 3-pointers in the second quarter to keep Camas ahead while standout Carson Frawley was sidelined with foul trouble.

He was also tasked with guarding standout point guard Bryson Metz, a senior, for long stretches of the game.

“To see him really step up like that in honestly the biggest crowd any of these players have played in up to this point in their careers,” Josephson said. “Pretty cool to see him rise to the occasion.”

(All photos by Andy Buhler)