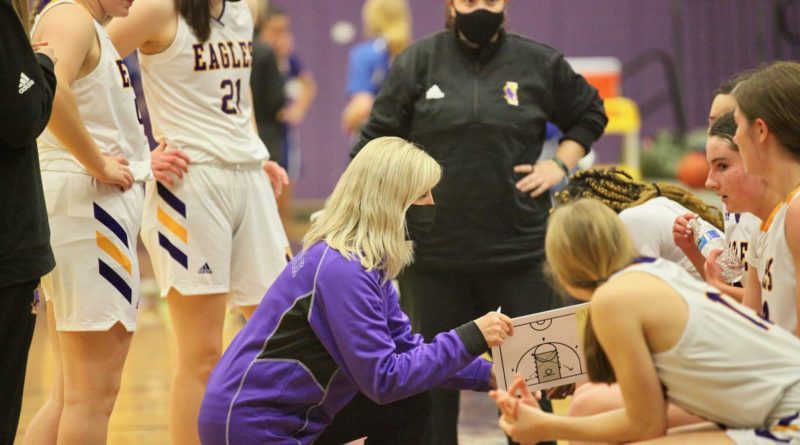 She thought she was done coaching basketball for good – first as a KingCo coach for nearly two decades at Mount Si and Issaquah, of which she spent 15 seasons at the helm up until 2012-13.

In recent years, she took on more laid-back assistant-coaching positions, first at Bellevue College and back at her old school under Doug Crandall up until last spring when the Eagles’ season was reduced to just six games.

The way it all ended for that senior class, including her daughter, Camryn, left a bad taste in her mouth.

“I was just really angry in the sense I felt so bad for those girls,” Gibson said. “I was done. I cut all ties … I was disengaging, kind of intentionally.”

Well, when the Eagles needed a coach after Crandall was placed on administrative leave in early December – they sought out the school’s most successful coach ever.

And Gibson is back leading the way – at least for the remainder of this season.

During her first 15-year tenure at Issaquah (1998-2013), Gibson led the Eagles to eight state tournament berths, bringing home six trophies – including a runner-up finish in 2005-06 when the team lost to Chief Sealth in the 3A title game (since then that title has been vacated). She won 388 games in the KingCo Conference.

When she was approached about returning, she agreed only if former Issaquah coach Jackie Bykonen would be part of the coaching staff.

“Jackie and I decided we wanted to try and make this a positive experience and make as many great memories as possible,” Gibson said.

With some of the core group still back after Issaquah placed fourth at the 4A tournament in 2019-20, the Eagles were a preseason top-10 team -and were off to a 3-0 start at the time Crandall was suspended.

Gibson came on board, admittedly jittery about coaching again.

So, Gibson wants her team to play fast and free – and see where it goes. Hopefully that means a return trip to the state playoffs.

“We’ve been with the team almost a month,” Gibson said. “We’re slowly changing things and adapting things to where we see the most needs.”