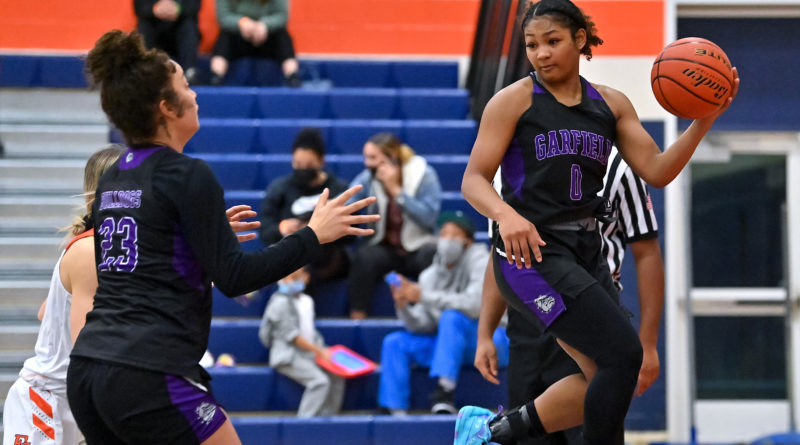 SAMMAMISH – Malia Samuels never thought of herself as a purple-adorned girl.

“It was weird putting it on,” Samuels said. “I am not going to lie.”

Get used to it. Once the speeding-bullet all-state point guard at Eastside Catholic, Samuels shifted her allegiance to another Metro League powerhouse this season.

And it’s just about joining a talented cast under coach Marvin Hall, her addition gives the Bulldogs one of the most fearsome backcourt duos in the nation.

Samuels, a four-star top-150 national recruit in 2023, has joined forces with Katie Fiso, a five-star 2024 recruit who is arguably the top point guard in the country in that class.

“Its about their flow, and them getting to know each other and connecting,” Hall said. “And it’s happening faster than I thought.”

The two teenagers are very familiar with each other: They’ve grown up in the same neighborhood, attended many of the same all-star basketball camps and even worked out at the same athletic club.

But largely, until now, they’ve always been on different teams – especially in AAU as Samuels has starred with the Northwest Greyhounds, and Fiso is a centerpiece for Tree of Hope EYBL.

“It’s always been us against each other,” Fiso said. “It took a couple of practices to get used to each other, but we’ve clicked like that … as a dynamic duo.”

In 2019-20, Samuels led a young Eastside Catholic group to a Metro League title, beating Garfield and Fiso’s older sister, Meghan, in the process. She was voted the league player of the year.

In fact, the Crusaders’ signature regular-season victory came over the Bulldogs (who still went on to win the state title) when they were ranked No. 1 – 73-49 in Sammamish.

Katie Fiso was an eighth grader at the time, and in the stands watching that blowout as Samuels scored a game-high 19 points.

Two years later, the circumstances were much different Saturday night in a Metro showdown on the same court.

Samuels scored 23 points against her old team. Fiso matched her. The Bulldogs won, 88-50.

“It was really weird. You could just feel the tense atmosphere,” said Samuels, whose Bulldogs trailed much of the first half before a 15-2 spurt over the final 2:20 gave them the lead for good.

“But I feel like I am at a point in my life where I am past (the Eastside Catholic tenure) – just growing and maturing.”

After her one-and-done stint with the Crusaders, Samuels played at a local prep school during the pandemic-impacted spring season.

Then choosing to go to Garfield?

“I really wanted to play for my city,” she said. “The whole prep-school route was cool, but I didn’t play in front of any fans.”

Now, Class 3A teams have to deal with pressure-oriented, fastbreak-fueled duo of Samuels and Fiso for the next couple of seasons.

“I knew we were not going to butt heads too much. We like to feed off of each other,” Samuels said.

“We don’t have big egos to begin with, so the transition wasn’t too hard. I want to win. I will do whatever it takes to do that. And she has the same mentality.”