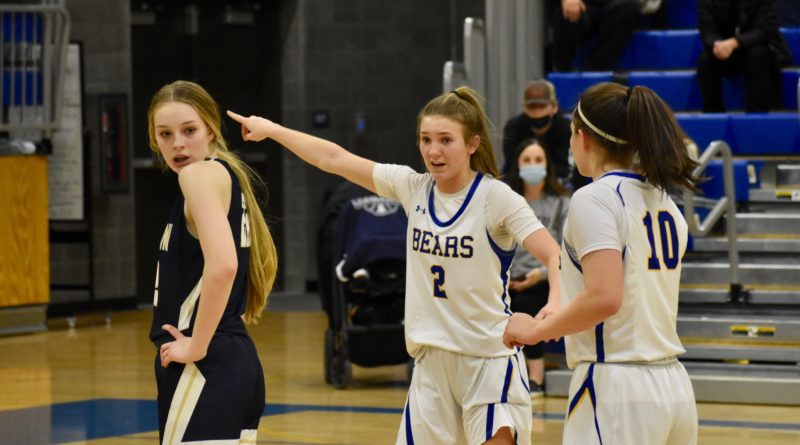 MAPLE VALLEY – It wasn’t just a matchup of two of the best girls basketball teams in the state Friday night.

It was also to see who the “Speediest Gonzales” was as well.

In the end, third-ranked 4A Tahoma wore out 3A No. 2 Arlington, 81-64, in a game that was set up the day before tipoff because of a COVID-19 cancellation.

Hope Hassmann led all scorers with 26 points – half coming in a breakaway second quarter. Lauryn Frederickson added 16 points for the Bears.

“That is the way basketball should be played,” Bears coach Pete Smith said. “It is up tempo. People like to watch it. It’s a fun style.”

Here are four takeaways from the Tahoma-Arlington game:

IF ONLY BOTH TEAMS WERE IN PEAK CONDITION

In the stop-and-restart nature of pandemic-era basketball, neither one of these high-powered teams have been in much of a groove playing games.

In fact, the Eagles had not played a game in three weeks – since Dec. 15.

“To play that kind of game, and at that tempo tonight for our kids was going to be really tough,” Arlington coach Joe Marsh said. “We just couldn’t sustain it. It’s not there right now. And they are really good.”

Both teams came out strong: There were ninth lead changes in the first quarter as Tahoma grabbed a 22-21 lead.

The Bears kept pushing the pace – and the Eagles hit a second-quarter wall.

“I wasn’t really looking for turnovers today. I was just trying to push the pace and tire kids out, and we accomplished that a little bit,” Smith said. “Unfortunately, we tired ourselves out … and lasted for 26 minutes before we ran out of gas.”

HOPE HASSMANN KNOWS EXACTLY WHEN TO PRESS THE PEDAL

But she led off the second quarter with a steal, feeding Angelina Cavanaugh for a basket.

And next time, Hassmann drilled a 3-pointer – triggering a 13-point output as the Bears broke out on a 24-9 run.

“I’ve talked a lot about advantage shots for her – and there are a lot of them,” Smith said. “She does it when she needs to go on a run. … It’s not coached. It just happens naturally.”

Of course, the tempo was perfect for reigning 4A NPSL player of the year.

“It’s fun to play up and down with fast teams,” Hassmann said.

Hassmann is clearly the engine that power the Class 4A contending Bears, but it’s difficult to ignore what fellow junior Lauryn Frederickson gives this ballclub.

A little bit of everything.

Like many of her teammates, Frederickson can knock down a 3-pointer. She also is keen at feeding cutters and setting ball screens. And at 5-foot-9, she is tough enough to get down and dirty in the paint against bigger post players.

“We call her our ‘Draymond Green,'” Smith said.

And the forward had been in a 10-day COVID-19 house quarantine up until Friday – and unleashed a hurricane of energy in addition to scoring 16 points, including a pair of first-quarter 3-pointers.

“She is like our warrior player,” Hassmann said. “She has all-time energy.”

EAGLES HAVE EMERGING NO. 3 OPTION

Villa showed off that unlimited range Friday with four deep 3-pointers, and Keira Marsh is a reliable point guard who really attacks the basket.

But if Arlington continues to get what it did from sophomore Samara Morrow – she finished with 17 points – it will have a three-headed monster tough to stop.

“We’ve been waiting for her to score … to take that next step,” Joe Marsh said. “She is already an outstanding defender.”

In fact, Morrow was primarily assigned to guard Hassmann, and has the athleticism to really stay with elite guards.

But if she keeps making shots … look out.

“We could be really dangerous,” Joe Marsh said.