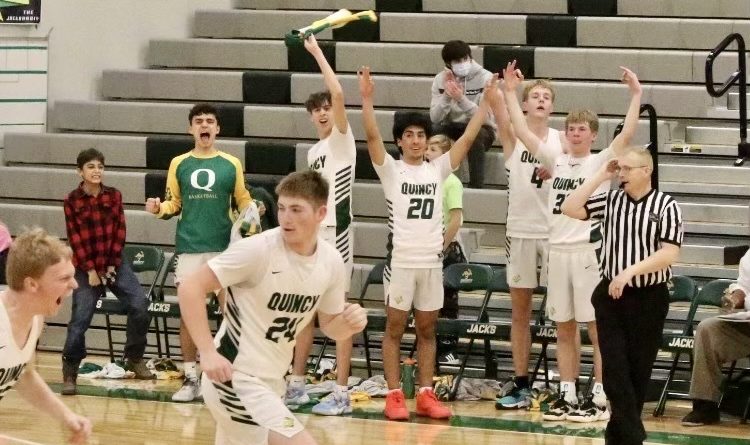 Scott Bierlink told himself two things when he graduated from Quincy High School in 2000 and prepared to head off to Whitworth University in Spokane to play basketball.

He’d never move back to Quincy and he’d never, ever go into farming — a popular profession in the small central Washington city of fewer than 10,000 people just over 30 miles southeast of Wenatchee and 30 miles to Royal City’s northwest.

Some 21 years later, he’s a Quincy resident who farms alfalfa, corn and beans on 1,000 acres. And he’s cooking up a special season as the Jackrabbits’ fourth-year head boys basketball coach.

No, the irony isn’t lost on him.

Neither is the sharp program turnaround for a program that won a total of four games between 2016-20 and went 0-20 and 1-19 in Bierlink’s first two seasons. Many of the the core upperclassmen played prominent roles as freshmen and sophomores, and took their lumps.

“It was bad,” Bierlink said. “I thought we’d change styles, do it faster. We had some rough nights.

The Jackrabbits (10-2) are hitting their stride with a group that has largely been playing together since grade school.

They’re led by Treyvaughn Bierlink, Scott’s son, a 6-foot-3 guard averaging 24.4 points per game with 40 against Chelan and 34 versus Cashmere, senior Aidan Heikes (18.3 points per game) and the team has elevated to another level with the emergence of 6-foot-6 sophomore forward Aidan Bews (12.4), who Scott Bierlink believes is “oozing with college potential.”

The Jackrabbits took nonleague losses to Lakeside of Nine Mile Falls and reigning 2B champion Brewster, but sit in first place (6-0) in 1A Caribou Trail League play, with up-and-coming Chelan (6-5, 4-1) in position to draw even on Friday when the teams rematch.

What separates this Jackrabbits group? Experience and chemistry, for starters.

Scott Bierlink took over as the program’s head coach in 2018, replacing Wade Peterson, who coached the team from 2001 to 2017 — including a 2A state runner-up finish in 2005. Peterson is still on staff as an assistant coach, and was the JV coach when Bierlink was a senior, and was a part of another Quincy hoops heyday.

He played on the 1999-00 team that lost to a Luke Ridnour-led Blaine overtime in the state quarterfinals.

He’s now convinced the down years, especially his first two seasons at the helm spent in the gutter, shaped this group into the team it is today.

West Seattle out to hot start behind strong backcourt

The West Seattle senior and Eastern Washington target is embracing his leadership role in his third year as a starter. So much so, Wildcats coach Dan Kriley says he could hand over the practice plan to the 6-foot-4 combo guard averaging 21 points per game, and the team wouldn’t skip a beat.

“He’s just grown a lot mentally,” Kriley said. “He can go out and score 21 on half as many shots … He lives and breaths hoops, he’s super smart, a literal coach on the floor.”

The progress of Watts, the son of former University of Washington standout Donald Watts and the grandson of Seattle SuperSonics legend Slick Watts, into a bonafide Division I prospect and the team’s unquestioned leader is a big reason behind the Wildcats’ 6-0 start.

Add senior point guard Tayons Sessoms (13 points per game), who moved in last school year from Colorado, to the mix, and the two form one of the more formidable backcourts in the Metro League.

The hot start also demonstrates the program has stayed winning under third-year coach Dan Kriley. Kriley was formerly the head women’s coach at Seattle U and previously made coaching stops at Pierce College, Tacoma Community College and Ballard High School. He replaced Keffrey Fazio in 2019, who took an assistant coaching job at Division II Seattle Pacific.

Kriley feels he’s put down roots in West Seattle, where he lives. His son, Jake Kriley, is a freshman on the JV team.

Small-school football champs getting working back into basketball shape

Navigating the quick turnaround from football to basketball season can be tricky for players adjusting from conditioning on the gridiron to the hardwood.

For small schools that play deep into the postseason, the early season can be particularly tricky. Often times the basketball and football teams have a ton of overlap.

Take 1B and 2B state football champions Almira-Coulee-Harline and Kalama, for example, which the occupy No. 3 and No. 9 spots in SBLive’s power rankings, in each’s respective classifications.

Preseason 1B No. 1 ACH coach Graham Grindy saw his Warriors’ early 20-point loss to No. 1 Cusick on Dec. 20 and the ensuing loss to 1A Omak in the following game as wakeup calls, and blamed them in part due to heavy legs from his football players still working into basketball shape.

That fitness and cohesion improved over the holiday break. On Tuesday, the Warriors handed Lake Roosevelt its first loss of the season on a go-ahead bucket in the final seconds (see below), 66-65.

“We’d gone through a couple tough losses,” Warriors coach Graham Grindy said. “These nonleague games for us are hard, especially coming off of a football run without a ton of practices, but they’re also good for us, they reveal what you need to work on. Guys are learning. That was a good momentum swing.”

Like many teams across the state, Kalama’s 4-1 start to the season has been far from normal. The Chinooks have only played five games due to COVID-19 cancelations and winter weather. Coach Wes Armstrong has thrown away five scouting plans day-of due to cancelations.

Still, he sees promise in early results that include a comeback win over 2A Woodland, a win over 3A Prairie and a win over 1A King’s Way Christian, despite the Knights missing their best player, Giovanny Evanson. He even thinks the lack of game time due to cancelations has given his football players more of a chance to catch up on basketball conditioning and heal up from injuries carried over from its 2B football title run.

Fr example, standout guard Jackson Esary (25.5 points, 11 rebounds, 4.2 assists, three steals per game) has worked back to about “90 percent” strength from an AC sprain he played through in the state title game, Armstrong said.

“I’m pleased in our progress,” Armstrong said. “Would I like to be further along? Absolutely.”