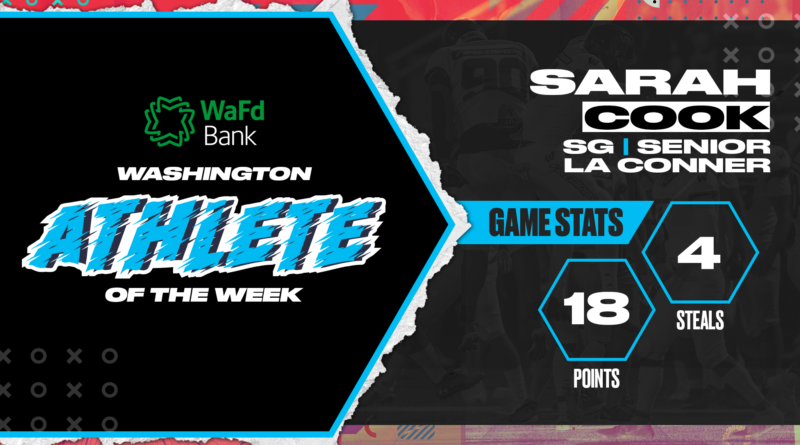 The senior wing player totaled a game-high 18 points and four steals, and the 2B Braves defeated 3A Wesco Stanwood in a matchup of unbeatens.

Cook received 37.88% of the vote, beating out Hanford’s Lynnea Moran who finished second with 22.33%. Squalicum’s Mari Binning finished third with 12% and Sehome’s Maddie Schumacher finished fourth with 9.44%. There were over 85,000 votes tallied this week!

Malia Garcia, Mount Vernon Girls Basketball: Had 31 points in a win over Sehome.

Avery Dohner, Blaine Boys Basketball: Had 8 points and two critical 3-pointers in a 46-41 win over Lynden- handing the Lions their first loss of the season.

Sherrell McCullum, Garfield Boys Basketball: Had 20 points in a 62-53 win over Auburn to win the Hardwood Invite title.

Kaden Hansen, Auburn Boys Basketball: Had 20 points in a 65-53 loss against Garfield in the championship game of the Hardwood Invite.

Nikita Tyukalo, Bothell Boys Basketball: Had 32 points, 7 rebounds, and 3 assists in a 86-76 win over Lake Washington.

Anthony Canales, Lynden Boys Basketball: Led the Lions with 15 points and 7 rebounds in a 46-41 loss against Blaine.

Libby Stump, Lynden Christian Girls Basketball: Had 26 points including four 3-pointers in a 74-37 win over Ferndale.

Mari Binning, Squalicum Girls Basketball: Had 24 points, 5 rebounds, 2 assists and 2 steals in a loss against Meridian.

Addison Harris, Camas Girls Basketball: The sophomore forward dominated the paint against Bellarmine Prep with a career-high 28 points – 17 coming in the first half. She also finished with 13 rebounds in the road win in Tacoma.

Gabby Stuart, Seattle Prep Girls Basketball: The senior guard for the Panthers poured in a game-high 21 points in a win over Shame.

Asher Cai, Colfax Girls Basketball: The CWU-bound shooting guard scored a team-high 27 points in a loss against Liberty of Spangle.