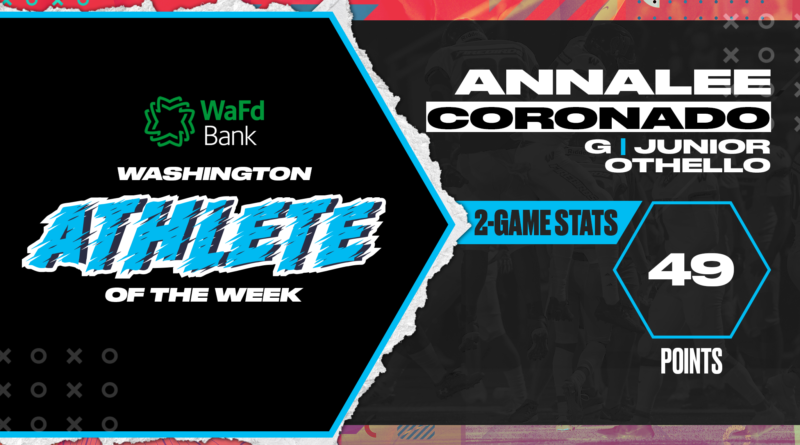 Coronado received 41.78% of the vote, beating out Mountlake Terrace’s Mya Sheffield who finished second with 33.04%. Liberty of Spangle’s Teagan Colvin finished third with 8.2% and Graham-Kapowsin’s Joshua Wood finished fourth with 5.28%. There were over 61,000 votes tallied this week!

Jaylin Stewart, Garfield Boys Basketball: Scored a game-high 22 points in a 95-50 win over 4A No. 5 Union in the Hardwood Invite.

Kyra Gardner, Raymond Girls Basketball: The WSU signee tied the single-game school record with 38 points in a win over 1A Tenino, and had a triple double in a 2B showdown against Chief Leschi with 37 points, 20 rebounds and 11 steals in a win.

Kaylia Heidelberg, Peninsula Girls Basketball: Tied the school record with (7) 3 pointers, shooting 7 for 13. Finished with 21 points, 9 rebounds, 3 assists, and 2 steals in a close loss to GHHS.

Koren Johnson, Garfield Boys Basketball: Posted a triple-double (15 points, 9 steals, 8 assists) in a 95-50 win over 4A No. 5 Union in the Hardwood Invite.

Kayla Jones, Ferris Girls Basketball: The freshman put up 16 3 pointers over the course of three games for the Saxons.

Takeo Staten-Sylvester, O’Dea Boys Basketball: Added 15 points in in a 67-53 win over Gonzaga Prep in the Hardwood Invite.

Jonas La Tour, North Kitsap Boys Basketball: Had 26 points in a 72-57 win over Timberline in the Curtis Winter Classic.

Carson Talbert, Tahoma Boys Basketball: Led Tahoma with 30 points in a 74-68 loss against Mt. Spokane in the Curtis Winter Classic.

Sylas Williams, Jackson Boys Basketball: Finished with a game-high 24 points in a 65-61 win over Port Angeles in the Curtis Winter Classic.

Joshua Wood, Graham-Kapowsin QB: Completed 15 of 24 passes for 274 yards and four touchdowns also rushed for 78 yards in a thrilling 40-36 win over Collins Hill in the GEICO Bowl Series.

Malia Ruud, Chiawana Girls Basketball: Had 12 points, 19 rebounds, and 2 assists in a 53-47 win over Kennewick.

Veronica Sheffey, Woodinville Girls Basketball: Had 14 points and 9 assists in a 92-26 win over Redmond.

Alyssa Smith, Bethel Girls Basketball: The junior forward scored 15 points and pulled down a school-record 26 rebounds in a win over Curtis.

Teagan Colvin, Liberty of Spangle Girls Basketball: The sophomore point guard hit a season-high five 3-pointers on her way to 26 points, with 10 rebounds and eight steals in a victory over Brewster.

Mya Groce, Pasco Girls Basketball: In a matchup of 4A MCC contenders, the point guard totaled a a season-high 21 points with eight rebounds and five steals in a victory over Kamiakin.