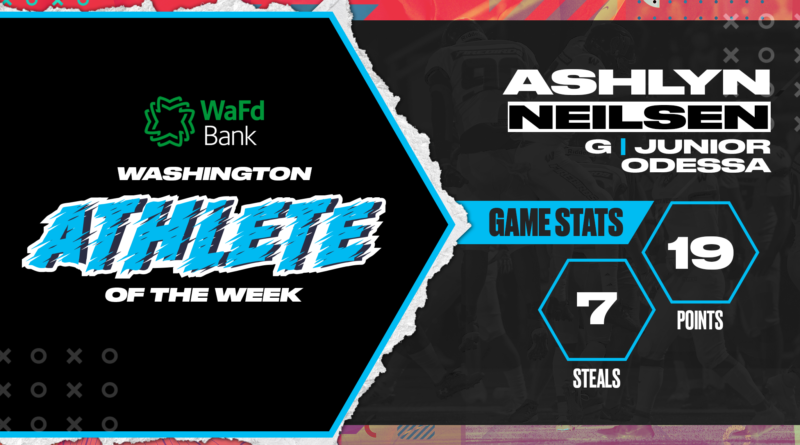 The junior totaled 19 points and 7 steals in the Tigers’ 53-24 over Valley Christian.

Neilson received 46.03% of the vote, beating out Chiawana’s Malia Ruud who finished second with 32.7%. Woodinville’s Tatum Thompson finished third with 12.01% and Liberty’s Miki Vermuelen finished fourth with 3.53%. There were over 67,000 votes tallied this week!

Jonas La Tour, North Kitsap Boys Basketball: Had 31 points and 14 rebounds in a 72-51 win over Kelso.

Trayshion Sullivan, Spanaway Lake Boys Basketball: Led all scorers with 27 points for the Sentinels in a 75-48 win to snap Silas’ 23-game league winning streak, dating back to 2019.

Malia Ruud, Chiawana Girls Basketball: Had 25 points and 14 rebounds in a 76-32 win over West Valley.

Miki Vermuelen, Liberty Girls Basketball: Had 20 points, 3 assists, and 4 rebounds in a 71-27 win over Jefferson.

Natalie Sumrok, Tumwater Girls Basketball: Had 20 points, 5 assists, and 3 rebounds in a 69-9 win over Rochester.

Owen Moriarty, O’Dea Boys Basketball: Had 18 points and 2 assists in a 83-42 win over Franklin.

Kenzi Pedersen, Garfield- Palouse Girls Basketball: Pedersen put up a double-double of 28 points and 12 rebounds to help the Vikings defeat Colton 67-63 in overtime.