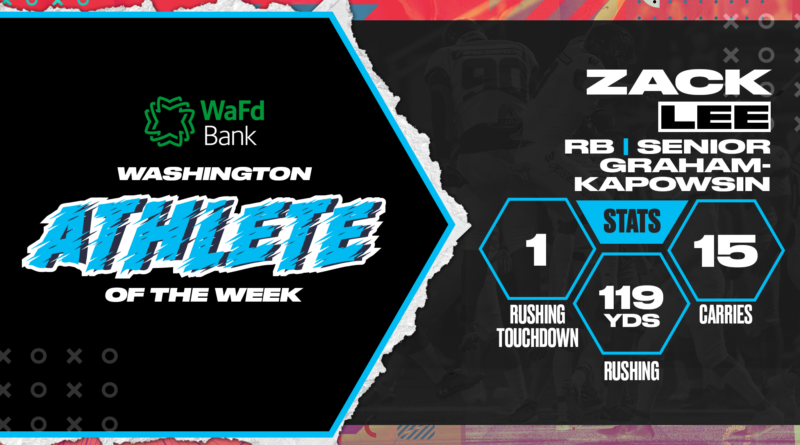 Congratulations to Graham-Kapowsin running back Zack Lee for being voted SBLive’s WaFd Bank Washington High School Athlete of the Week for Nov. 22-28!

The senior led the Eagles in rushing with 119 yards and a touchdown on 15 carries in 42-0 4A semifinal win over Kamiakin.

Lee received 50.26% of the vote, beating out Bellevue’s William Wang who finished second with 37.36%. Bonney Lake’s Jazmyn Shipp finished third with 7.64% and Tumwater’s Carlos Matheney finished fourth with 2.15%. There were over 26,000 votes tallied this week!

Kevin Wulff, Eatonville: Wulff threw for 323 yards and accounted for five touchdowns to lead Eatonville to a 38-6 win over Lynden Christian in the WIAA 1A football semifinals.

William Wang, Bellevue: Wang had game-high 182 yards and three rushing touchdowns in Wolverines’ 27-3 win over Marysville-Pilchuck in the Class 3A semifinals.

Ashton Demarest, Napavine: Demarest finished with 88 rushing yards and two touchdowns on 10 carries and 115 yards passing in 42-10 2B state semifinal win over No. 3 Okanogan.

Jayshon Limar, Lake Stevens: Rushed for 75 yards on 12 carries and three touchdowns in 45-28 4A state semifinal win over Eastlake.

Marshall Haight, Onalaska: Led Onalaska with 169 total yards and two touchdowns on 25 carries in 46-30 2B semifinal loss against Kalama.

Derek Bergeson, Royal: Threw for 122 yards, rushed for another 81 yards and accounted for four total touchdowns in 35-14 1A semifinal win over ninth-ranked King’s.

Carlos Matheney, Tumwater: Rushed for 97 yards on 17 carries in Tumwater’s 14-3 2A state semifinal win over Squalicum.