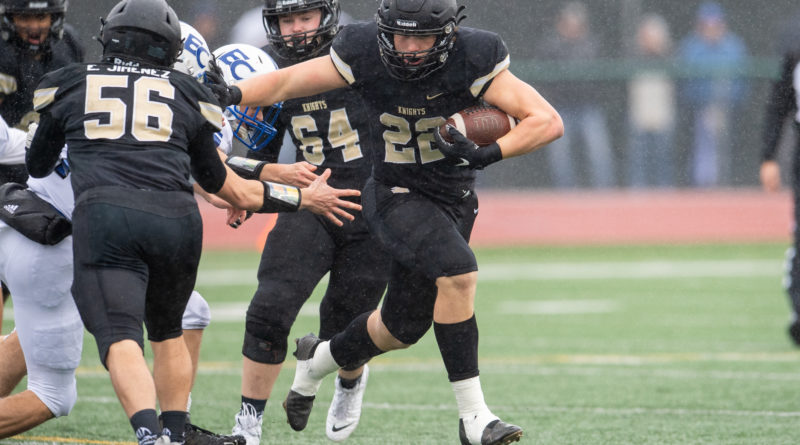 LAKEWOOD – The most dominant Class 1A football program in WIAA history added another chapter to its storied run of success Saturday afternoon.

Top-ranked Royal made it an even 10 state titles with a 41-0 victory over No. 2 Eatonville at Harry E. Lang Stadium.

Senior Avery Ellis scored a state-championship record five touchdowns, four coming in the first half as the Knights built a 34-0 lead. He finished with 175 rushing yards as Royal racked up 472 total yards, to the Cruisers’ 48 yards.

The last score of the half was set up after an Eatonville fumble at its own 10-yard line in the final seconds.

On the first play, quarterback Derek Bergeson lofted a pass to Ellis down the right sideline. The tailback grabbed it over two Cruisers’ defenders for the score with seven seconds remaining.

The Knights outgained Eatonville, 326-53, in the decisive first half.

Ellis set the new 1A title-game touchdowns mark with his 14-yard scamper on the first play of the fourth quarter.

Royal won the 1A title two years ago with a 26-22 victory over Lynden Christian on this same field under the WIAA’s new three-site championship format.