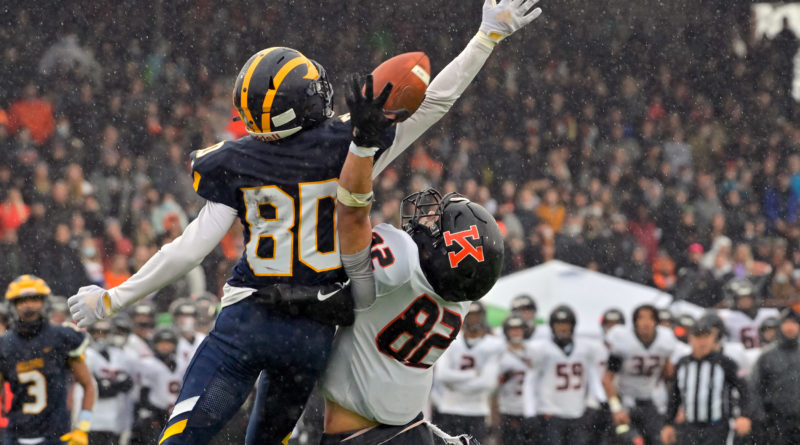 PUYALLUP — A one-time state powerhouse is now back on top.

Senior running back William Wang rushed for 243 yards and two touchdowns to lead Bellevue to a 3A state championship win over Kennewick on Saturday afternoon at Sparks Stadium. Wang’s 64-yard burst up the middle with four minutes left gave the top-seeded Wolverines (14-0) the winning margin.

The win marks a return to the top for a former state juggernaut that won eight state championships from 2001 to 2011. The program also won in 2012 and 2013, but those titles were vacated by the WIAA for recruiting and rule violations.

“Before that play I went to the sideline and told coach we should run that play more because it felt open, right?” Wang said while holding the WIAA trophy in the postgame celebration. “I knew I was going to break one because I almost broke one before.”

Kennewick, which traveled across the state for the third consecutive week after toppling four-seed O’Dea in the quarterfinals and three-seed Eastside Catholic in the semis, had the ball in Bellevue territory with just over four minutes left, but Wolverines sophomore Collin Miller made a diving interception that gave Bellevue the ball back for good.

Kennewick filled the visiting grandstands to watch the six-seeded Lions play in its first state title appearance since 1983. They reached the semifinals in 2019 before losing to O’Dea.

Bellevue head coach Michael Kneip was a senior on the 2011 team — the program’s last state title before Saturday — and won four state championships as a player under coach Butch Goncharoff. His fourth year at the helm of his alma mater ends with the Wolverines back on top of the state.

“This is one of those special moments you can’t prepare for, but you enjoy every second of it,” Kneip said. “Again, I’m so happy for these kids. They’re such good kids.”