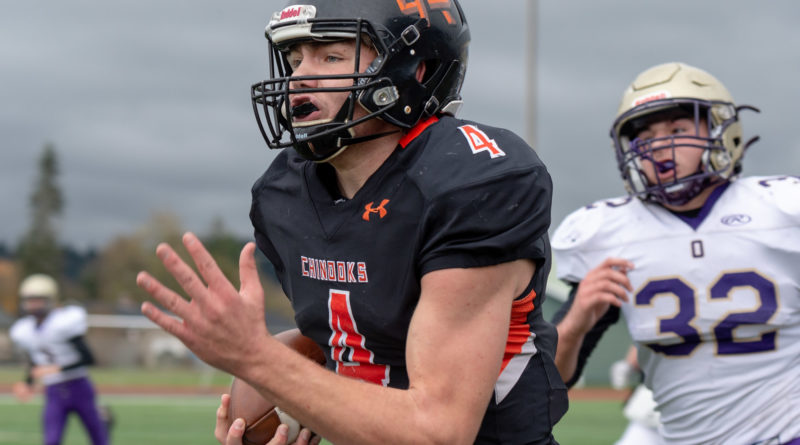 From 4A Lake Stevens quarterback Grayson Murren’s prolific passing performance in a downpour to Jackson Esary’s do-it-all day to push Kalama back to the 2B title, here are the standout individual high school football performances from the 2021 WIAA state semifinals.

Names are listed in alphabetical order

Overcame early turnovers to account for more than 200 total yards of offense (122 passing yards, 81 throwing) and four total touchdowns in a 35-14 win over five-seed King’s. Also had a forced fumble and fumble recovery on defense.

Turned 35 carries into 187 yards and four touchdowns in a 36-12 win over two-time defending 1B state champion Odessa.

Caught 13 passes for 166 yards and both of QB Grayson Murren’s touchdown passes in a 45-28 win over Eastlake.

The Tigers’ home-run threat only need four touches on offense to go for 167 total yards and two touchdowns. He had a 77-yard touchdown reception and a 65-yard touchdown run to help pull away in a 42-10 win over Okanogan.

Helped the Wolverines offense break out of a slow first half with a 65-yard touchdown run late in the third quarter in a 27-3 semifinal win over Marysville-Pilchuck.

The quarterback took 16 carries for 188 rushing yards and two touchdowns in a 68-32 win over Naselle.

Accounted for 159 rushing yards, 83 receiving yards on four catches and six total touchdowns in a 68-32 win over Naselle.

Rushed 25 times for 175 yards and two touchdowns in a 46-30 state semifinal loss to Kalama.

Led the Eagles in rushing with 119 yards and a touchdown on 15 carries in 42-0 4A semifinal win over Kamiakin.

The ninth-grader turned 12 carries into 75 rushing yards and three touchdowns in a 45-28 semifinal win over Eastlake.

Rushed for 97 yards on 17 carries in Tumwater’s 14-3 2A state semifinal win over Squalicum.

Demarest finished with 88 rushing yards and two touchdowns on 10 carries and 115 yards passing in 42-10 2B state semifinal win over No. 3 Okanogan.

Turned a 10-yard pass into a 96-yard touchdown haul and had the game-sealing pass breakup in the endzone with 41.3 seconds left in a 14-7 win over No. 2 seed Eastside Catholic.

Tossed for 222 yards and two touchdowns in a 35-14 loss to top seed and two-time defending state champs Royal.

The fullback rushed eight times for 86 yards, scored the game’s first touchdown and helped the Eagles establish its tough-to-stop run game in a 42-0 semifinal win over Kamiakin.

Rushed for 150 of his game-high 182 yards and three touchdowns in a 27-3 semifinal win over Marysville-Pilchuck.

Completed 13 of 16 pass attempts for 323 yards, two passing touchdowns and three rushing scores in a 35-14 win over Lynden Christian.

WIAA 1B football championship preview: No. 1 Almira/Coulee-Hartline, No. 3 Quilcene both see unfinished business

WIAA 2B football championship preview: Like clockwork, No. 1 Kalama, No. 2 Napavine meet late in playoffs, this time for all the marbles

WIAA 1A football championship preview: No. 2 Eatonville is a yesteryear state power. Can it end No. 1 Royal’s torrid run?

WIAA 4A football championship preview: There’s a first time for everything, including winning a state title

‘A long two years’ for No. 1 Royal will end where it began – in the Class 1A championship game: 4 observations

Kalama knocks out defending Class 2B champion Onalaska, has sight set on own ‘dynasty’ run: 4 observations

How do you contain all of these Lake Stevens big-play threats? It’s why Vikings are playing for Class 4A title: 3 observations

No. 2 Napavine’s offense erupts, line dominates in 42-10 2B state semifinal win over No. 3 Okanogan

This next-generation Bellevue team moves one win away from adding to program’s rich state-championship legacy: 3 observations

Lynden channels ‘heart of a Lion’ to hold off No. 3 North Kitsap, reach 2A state title: 4 observations

No. 2 Eatonville cruises past No. 3 Lynden Christian, will play for first state title since 1991: 3 observations

No. 1 Tumwater suffocates Pac-12-talented No. 4 Squalicum to book 2A title game return trip

Photos: A downpour that never felt so good as No. 1 Graham-Kapowsin advances to first Class 4A title game