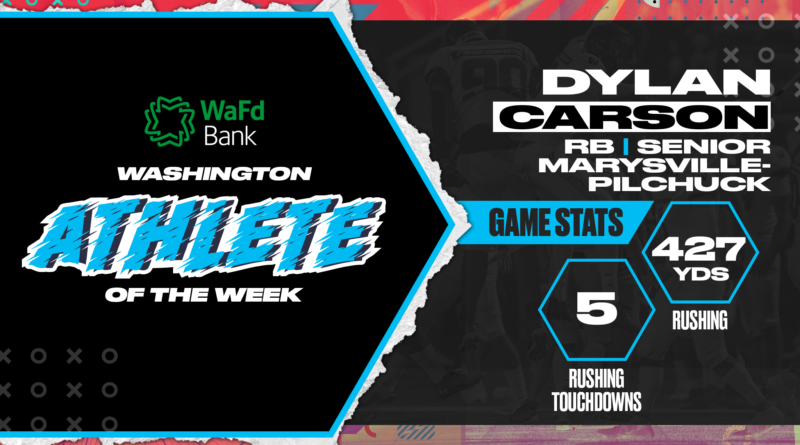 Congratulations to Marysville-Pilchuck running back Dylan Carson for being voted SBLive’s WaFd Bank Washington High School Athlete of the Week for Nov. 15-21!

The senior rushed for 427 yards and five touchdowns in a 39-21 win over No. 4 Yelm, pushing his season rushing total to 46 touchdowns and 2,567 yards — 114 yards away from Interlake’s Jordan Todd (2,681 yards) for the fifth-most single-season rushing yards in state history, per state high school football historian Dave Maley.

Carson received 40.26% of the vote, beating out Bothell’s Logan Lacio who finished second with 30.82%. Graham-Kapowsin’s Zackary Lee finished third with 19.5% and Bellevue’s William Wang finished fourth with 3.79%. There were over 164,000 votes tallied this week!

We are currently accepting WaFd Bank Player of the Week nominations. If you would like to nominate an athlete, please email sblive-social@scorebooklive.com or message us on Twitter or Instagram at @sblivewa.

Here are the other athletes who were nominated for the week of Nov. 15-21:

Tunison had 10 kills in Mead’s 3A state title win over second-seeded Peninsula.

Netted the lone goal in the Stags’ 1-0 victory over Seattle Academy to claim the 1A state title- the program’s first state championship.

Lewison scored a goal and had an assist in Lakeside’s 2-1 3A state title win over Seattle Prep.

Wieczorek had a a pair of overtime shootout saves to lead the Papermakers to 4A state title win over Issaquah.

Logged three interceptions on defense — including one that set up his team’s lone touchdown — in a 10-7 win over Lakeside of Nine Mile Fall on the road, helping the Knights reach their first state semifinal since 2015.

Caught seven passes for 171 yards and two touchdowns in a 38-14 win over Mt. Spokane.

Turned 23 carries into 228 yards and three touchdowns in a 54-15 win over Lind-Ritzville/Sprague.

Completed 17 of 28 passes for 247 yard and three touchdowns, giving wire-to-wire Class 4A No. 1 Graham-Kapowsin its toughest test of the season in a 41-25 state quarterfinal loss.

Rushed for 133 yards and four touchdowns in a 35-14 win over 4A GSL champ Gonzaga Prep.

Took 16 rushes for 129 yards and the T-Birds’ first two touchdowns in a 55-21 state 2A quarterfinal win over Enumclaw.

Turned 28 carries into 132 rushing yards and delivered one late-game gut punch after another inn a 27-21 win over O’Dea.

Returned from a late-season leg fracture and delivered a 14-of-21, 201-yard passing performance in a 35-14 win over Gonzaga Prep.

He’s nicknamed “the beast” for a reason. Rushed 26 times for 233 yards and his team’s lone touchdown in a 10-7 win over Lakeside of Nine Mile Falls on the road.

Scored three rushing touchdowns from one yard, 58 yards and 33 yards out for 181 total yards on the ground. The quarterback also threw two more touchdown passes and finished 11 for 14 passing for 186 yards in a 63-38 win over Ridgefield to advance to the program’s first-ever semifinal appearance.

Rushed 32 times for 197 yards and a career-best five touchdowns in a 56-22 win over Rainier Beach.

The sophomore defensive back had two interceptions, the second followed by a 91-yard return for touchdown, in a 38-14 win over Mount Spokane.

Barrysmith threw for 408 yards (setting an Eastlake school record) and 5 tds in Eastlake’s win against Sumner.