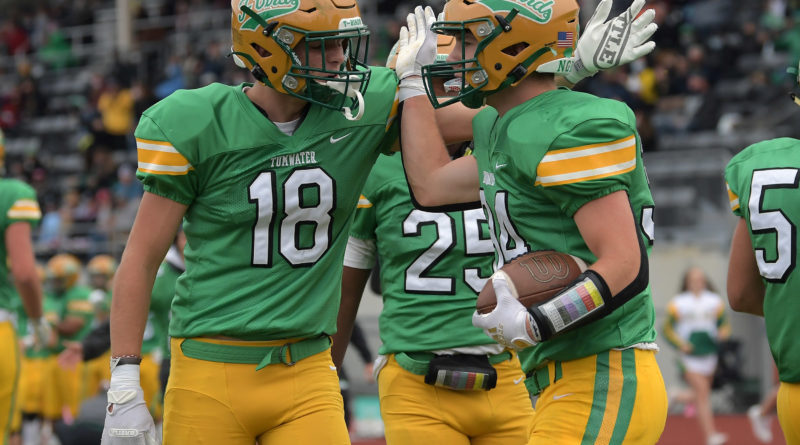 TUMWATER, Wash. — Tumwater’s run atop the 2A classification is more than a decade running, and marked by one defining trait.

The T-Birds (10-2) have won it all twice since 2010 and dispensed a line of state powers along the way. On Saturday, they added one more, holding the high-powered No. 4 Squalicum (8-3) offense without a touchdown in a 14-3 2A state semifinal win at Tumwater District Stadium. Tumwater kept high-flying Washington State commits Leyton Smithson and Ben Schlenbaker to 147 and 74 rushing yards, respectively, and otherwise stymied Squalicum’s offense at nearly every turn.

Next weekend’s 2A 2021 Gridiron Classic between the T-Birds and No. 2 Lynden will include Tumwater for the seventh time since 2010. The defending state champ T-Birds have continued to win with an overwhelming defense under head coach Bill Beattie, who replaced the state’s all-time winningest coach Sid Otton (who was in the stands Saturday) in 2017.

Is this rendition of Tumwater firing on all cylinders?

Schlenbaker and Smithson hit a stride in the state quarterfinals, accounting for a combined 518 yards of offense and nine touchdowns against 5-seed Ridgefield.

Beattie even admitted no T-Bird was as fast as Smithson — who Wazzu targeted in the secondary, a state 100-meter competitor, as well as a more-than-competent quarterback.

Stopping the powerful and shifty Schlenbaker took discipline and bodies. Washington commit Ryan Otton laid several stadium-reverberating hits on the Wazzu pledge, who entered the game with 1,089 rushing yards and 14 touchdowns on the year. So did Boise State-bound Austin Terry who cracked Schlenbaker on a punt attempt.

Schlenbaker went for six touchdowns and 231 yards in the Storm’s first round win over Highline.

“You’ve got to get to him before he gets to you,” Beattie said. “You’ve just got to get in there, and we felt with the size of our D-line we had a chance to get a push. We took the chances and got after him.”

Tumwater’s wing-T is a slow-rolling locomotive that is built to catch defenses off-guard.

It did just that on the game’s first scoring drive. After forcing punts on Squalicum’s first two drives, the T-Birds got the ball on their own 40.

Ashton Paine was stuffed for a loss twice to open the drive, but two big-gain plays — Alex Overbay hitting Carlos Matheney for a 25 yards and Payton Hoyt breaking loose for a 35-yard run — set up a wide open Overbay pass to Otton for a 19-yard touchdown and the game’s first points.

Tumwater scored once more when Hoyt capped an eight-play, 2:04 minute drive with a one-yard run in the final second of the first half.

A diving tackle on a would-be breakaway first half touchdown run proved invaluable in a low-scoring game.

Senior running back/defensive back Payton Hoyt halted Squalicum’s most productive play of the first half — a 57-yard Smithson run — with an open field shoestring tackle in the first minute of the second quarter.

“I thought if he breaks loose, we’re in trouble,” Beattie said. “But our kids didn’t give up. They just ran him down.”

After each stop as the game progressed.

Squalicum’s seniors had clear eyes on this state run during the playoff-less COVID-shortened spring season, its season-opening thrashing over eventual 1A semifinalist Lynden Christian, its injury-riddled back-to-back losses and ensuing five-game winning run that brought them to the playoffs.

The bond forged between that group was on display as players and coaches lined up, in an endzone postgame downpour, and greeted, hugged and thanked each senior — one by one.

“We want to keep playing every week and the championships the goal, but man, for us the goal is to be together next week and have another week,” Squalicum coach Nick Lucey said, “and that just tells you about the character of them.”

The stakes were never low for a group that earned the second of two playoff berths in a league that is widely believed to house five playoff-caliber teams.

“It’s been playoff football for us since Week 5,” Lucey said. “We knew if we lost one more game there would be no hope for the playoffs.”