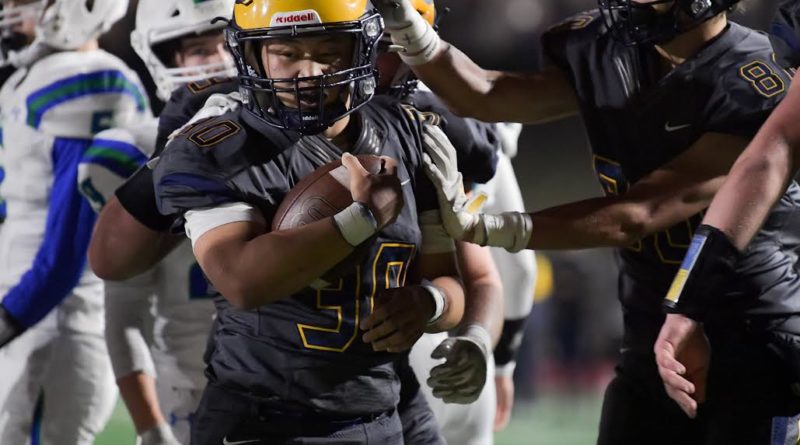 SEATTLE – Ishaan Daniels and the rest of the current players on the Bellevue High School football team take umbrage and feel slighted when a comparison to the program’s past dominant teams don’t include them.

Daniels said this year’s Wolverines are out to prove they belong in the conversation and are every bit as good.

After a sputtering first half, got rolling with 228 rushing yards of its 330 total rushing yards in the second half as Bellevue steamrolled Marysville-Pilchuck, 27-3, on Saturday in the Class 3A semifinals at Memorial Stadium.

Trailing 3-0 at halftime, Bellevue (13-0) stayed in the game with sound defense – until it go on track after intermission, rattling off 27 unanswered points, including 21 during a span of 6 minutes, 24 seconds in the third quarter.

“We just dominate and work hard, and it all pays off when it’s game time,” said Daniels, who put the game away 21-3 with a 65-yard touchdown run late in the third quarter. “The thing (Marysville-Pilchuck) running back Dylan Carson) said to www.Scorebooklive.com about, ‘It’s not the old Bellevue program’ – like that kind of got us fired up before the game.

“And, for me, that kind of like got me tuned in, especially being down 3-0 at the beginning of the second half. That just brought the fire right there.”

The Wolverines can add to their program’s storied success with a win over Kennewick (12-1) in the Class 3A state championship next Saturday at noon at Sparks Stadium in Puyallup. It will be the school’s 14th berth in the state-title contest, and they will be going for their 13th crown on the field. Bellevue had two of its titles – 2012 and 2013 – vacated in 2016 by Washington Interscholastic Activities (WIAA) sanctions for recruiting and rules violations.

Here are three observations from the Marysville-Pilchuck-Bellevue game:

WANG WAITS UNTIL SECOND HALF TO PROVIDE BANG

Bellevue senior running back William Wang had 32 yards rushing on 11 carries at halftime and the Wolverines’ Wing-T wasn’t clicking like it usually does.

That all changed in the second half as bigger holes opened and Wang provided harder running between the tackles, piling up 150 of his game-high 182 yards and all three of his rushing touchdowns.

Carson was having a quite a season to remember as a senior at Marysville-Pilchuck. He just wanted more games out of it.

The Tomahawks’ bruiser entered the state semifinals with a chance to climb higher on the state’s all-time, single-season rushing and touchdown lists.

The 6-foot, 195-pounder also was coming off a 427-yard, five-touchdown performance in the team’s 39-21 quarterfinals triumph over Yelm last week. He entered the semis with 2,565 yards (10th in the state, according to state statistician Dave Maley) and 46 all-purpose touchdowns (fourth).

Carson totaled 103 rushing on 22 carries – with most of his yards coming after Bellevue built a 21-3 lead.

The last time Marysville-Pilchuck had a chance to reach the state finals in football, the Bellevue program stood in its way. In the 3A state semifinals in 2014, the Wolverines turned back the Tomahawks, 20-10.

With a state semifinal loss in 1989, Marsyville-Pilchuck is no 0-3 in attempts to reach a state championship game.