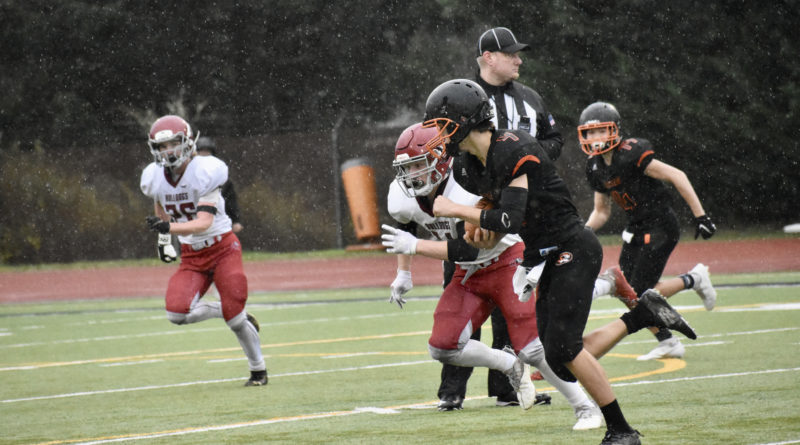 TUMWATER, Wash. — A pair of early second half touchdowns helped Napavine ride its explosive offense into the 2B state title game.

And shake off some program cobwebs in the process.

Glade Shannon’s 50-yard interception return for touchdown jump-started a second half where the No. 2 Tigers (12-0) scored four times unanswered to beat No. 3 Okanogan 42-10 in the 2B state semifinals — the same team that eliminated them from the postseason in 2014 and 2015.

“Our seniors were there as freshmen so it’s been a while,” Napavine coach Josh Fay said. “It is never easy getting to a title game. So it is a great feeling to have this opportunity again.”

Okanogan beat Napavine 17-14 in the 2014 2B title game and 36-34 in 2015. Saturday’s state semifinal title at Tumwater District Stadium on a rain-soaked afternoon was not so close.

Central 2B League champion Okanogan (11-1) kicker CJ Nelson’s 31-yard field goal in the final second of the first half cut the Tiger lead to 14-10.

Then, Napavine turned to its home-run athletes and ran away with it. After sophomore quarterback Ashton Demarest scampered in for a 20-yard touchdown run, Lucas Dahl ran 65 yards untouched down the right sideline.

Napavine will advance to play Central 2B League foe and top-seeded Kalama, which is approaching dynastic status after beating Onalaska Saturday to reach its fourth consecutive state title.

Dahl, Demarest and the litany of Tigers playmakers will appear in the box score, but Fay credited his line for controlling the game up front — namely first team all-league OL Deven Searles, who he said played his “best high school football game.”

“Our guys have been solid all year up front, all year,” Fay said. “I don’t think they have gotten enough credit.”

The Tigers built a two-touchdown lead early and its defense stunted the Bulldogs’ multi-pronged attack.

Demarest found Dahl, his deep-ball threat, who snuck behind a defensive back and hauled in a 77-yard touchdown for the game’s first points. Demarest then took a 17-yard designed quarterback run in to give the Tigers a 14-0 lead midway through the second quarter. He finished with 88 rushing yards and two. touchdowns on 10 carries and 115 yards passing (3 of 6). Dahl had 167 yards of total offense on four touches.

Okanogan was determined  offense showed life late in the second quarter. Quarterback Brad Ingram capped a productive drive with an 11-yard touchdown run to get on the board with 1:36 left.

Ingram intercepted a deep ball on the next drive, then hit wideout Lane Fingar for a 39-yard pass down the left sideline to set up the last-second second quarter field goal.

But whenever the Bulldogs tried to break loose, black jerseys swarmed. Okanogan was held to 155 yards of total offense to Napavine’s 449.

“Our team speed defensively was a difference,” Fay said. “We swarmed to the ball well and did a good job of gang tackling.”

The Tigers boasted a size advantage in the trenches thanks in part to USC commit Keith Olson. They haven’t played a close game since beating 1A Montesano 56-47 in Week 5.

The win means Napavine has reached seven consecutive 2B state semifinals and has won two state titles under head coach Josh Fay (2008, 2016). They last reached the title game in 2018 and lost to 34-25 to … Kalama.