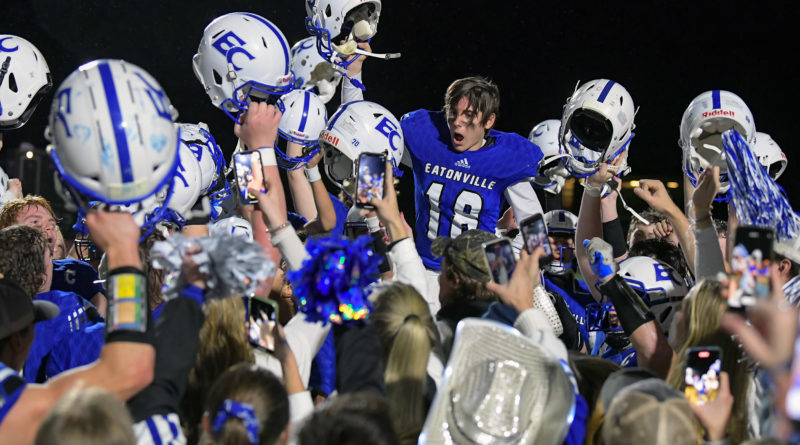 The Eatonville Cruisers broke open a close game with two touchdowns late in the first half, and advanced to their first state championship game since winning a title in 1992 with a 38-6 victory over Lynden Christian on Saturday night.

“I really feel it,” Eatonville quarterback Kevin Wulff said. “I’m speechless. I can’t believe how we just did this.”

Eatonville advances to face Royal, a 35-14 winner over King’s earlier in the day, in a state title game that pits a pair of 13-0 squads to be played at Harry E. Lang Stadium on the campus of Clover Park High in Lakewood.

Even as the Cruisers offense dominated time of possession early on, the points didn’t come in bunches. Wulff scored on a four-yard run, the first of his three rushing touchdowns, with 11:30 to go in the second quarter.

When he went in, Eatonville had outgained Lynden Christian 172-12, but led it only 13-0. Then, two possessions later, Tyler Sipma snuck outside and around the left corner for 14 yards and a score, and the Lyncs trailed it just 13-6 with 5:39 to go in the second quarter.

But the Cruisers continued to clamp down, taking the ball away with two interceptions when Lynden Christian appeared to begin to move the ball. The second of those takeaways, from Riley Mcilraith, came on a first-and-10 from the Cruiser 27, on a pass thrown into the end zone.

Eatonville did score most of its points on the ground.

In addition to Wulff’s three rushing touchdowns, Dylan Norman ran the ball 16 times for 88 yards and the first score of the game – a 1-yard plunge just less than four minutes into the game.

Despite continuing to play with an injured hand, Kralik still caught four total balls for 133 yards and a  score. He also blocked the Lyncs lone point after touchdown kick attempt.

Lucht led the receiving corps with five catches for 135 yards and a TD.

“Our receivers did great,” Wulff said. “Our offensive line, being able to hold all of that pressure, allowed me to hit them.”

Lucht’s father, Bobby, the quarterbacks coach, was the signal caller for that last Cruiser title team in 1992. Also on the sideline on Saturday, the running back from that team – Brandon Jumper. His son Caden just missed, having graduated after a building campaign in the spring.

Still, this run to the championship game really may be a year delayed. Eatonville felt it had a great chance had the COVID-19 pandemic not robbed the playoffs in 2020.

Which makes this run, and the now 16-game overall winning streak, even sweeter.

“Not just for the kids to be able to play well, but for the student body and the community to be able to share in the joy of this whole thing,” Eatonville coach Gavin Kralik said. “I think it means more after what everybody has gone through the last two years.”