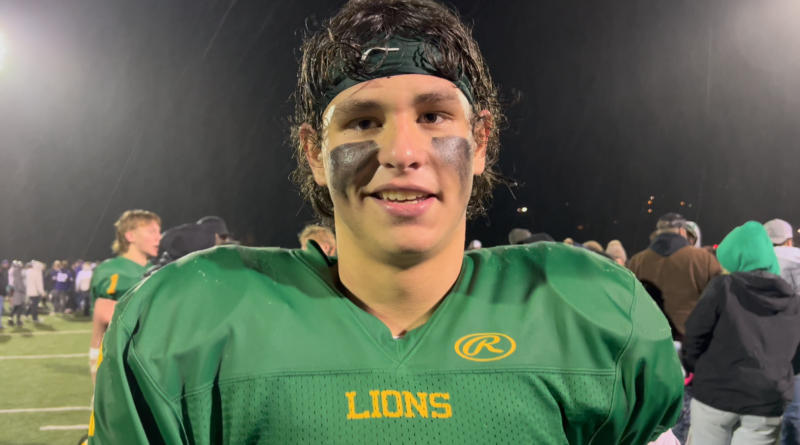 BELLINGHAM,  Wash. — The No. 2 Lynden Lions have a recipe for success: Run the ball, wear the opposing defense down and don’t give up the big play.

It’s worked all season for the Lions and while it was far from pretty against No. 3 North Kitsap, the Lions got it done in a 15-10 semifinal victory at Civic Stadium Saturday.

Lynden ended a Vikings win streak that dated back to 2019 to punch their ticket to the state championship next weekend against top-seeded Tumwater, which beat Squalicum 14-3  on Saturday.

The third phase of the game and weather might have played the biggest factor in determining the winner of this one.

Lynden scored the first points of the game on a safety when the snap on a North Kitsap punt attempt sailed over the punter’s head and out of the end zone.

The Vikings’ got on the board with a 35-yard field goal from Diego DeLuna, but the Lions blocked another field goal attempt later in the second quarter to keep their lead at 9-3 heading into halftime.

Early in the fourth quarter, the Lions lined up to punt and Troy Petz ran with it all the way to the left sideline and barely got the ball off, narrowly avoiding a blocked kick.

With the rain coming down from the start and not letting up at any point, neither offense was able to effectively throw the ball.

North Kitsap drove the ball down inside Lynden territory on multiple occasions and had its chances to score, but the Vikings came up empty on most of those trips.

A 38-yard completion from Colton Bower to Logan Sloman put North Kitsap at Lynden’s 10-yard line in the third quarter, but the Vikings wouldn’t put any points on the scoreboard as a costly facemask penalty put them out of scoring range and led to a punt instead.

HEART OF A LION

North Kitsap put together a nine-play, 85-yard drive that ended with a one-yard touchdown run from Bower to take a 10-9 lead with 6:33 left in the game.

Lynden had something a little bit better in store and it started with Cade Slayton.

Slayton came in at quarterback on what would be the Lions’ most important possession of the game, scoring the go-ahead touchdown on a one-yard plunge across the goal line.

The combination of Slayton, Campbell Nolte and Lane Heeringa gashed the Vikings’ defense for a 14-play, 80-yard scoring drive that took six minutes off the clock.

“To do that on this stage, at this level, against a team that hasn’t lost in two years, to just control and go down and do it that way was just humbling and I’m so proud,” VanDalen said. “We talk all the time about the heart of a lion and that drive epitomized the heart of a lion.”

Imitation is the highest form of flattery.

Putting Slayton in at quarterback in the game’s most pivotal moment was a trick out of the Hockinson playbook, VanDalen said.

“Hockinson did it to us (in 2018) and we had no answer,” VanDalen said. “Whether they scored or not, we were going to go with Slayton in the wildcat. It just gives us a different dimension. Slayton is a bruiser and with our two other backs and our two tight ends, that’s just 10 of our baddest dudes.”