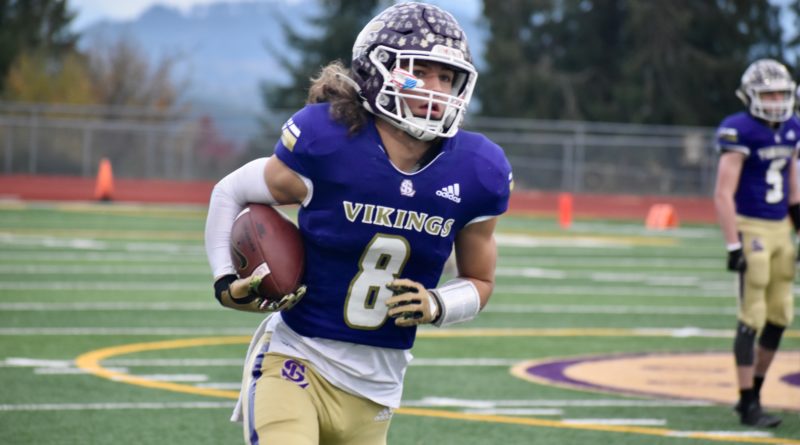 BOTHELL – The Lake Stevens Vikings and Eastlake Wolves were supposed to be familiar with each other entering Saturday’s Class 4A state semifinal and Pop Keeney Stadium. The two teams were set to meet In Week 1 of the regular season, but a COVID-19 outbreak led to the Vikings’ first two games of the season being cancelled.

As fate would have it, the two teams – which entered the game with a combined record of 22-0 (Eastlake 12-0 and Lake Stevens 10-0) – finally met on Saturday with a spot in the state championship game on the line.

Just as they have all season, the Vikings battled through adversity and kept their dream season alive, separating from the Wolves in the second half for a 45-28 victory.

“This team has been faced with adversity right from Week 1,” Lake Stevens coach Tom Tri said. “We had two games cancelled because of COVID, and then we had to sit out during that quarantine time. Then, we had to come back and open up with O’Dea, which is a powerhouse in the state.

“Our kids were just excited for the opportunity to play, I think. Every week we just continue to gain more experience and more confidence. With that has come more and more success. That’s why it’s been really fun to watch this team progress.”

The Vikings will play top-ranked Graham-Kapowsin next weekend for the championship.

Here are three observations from the Lake Stevens-Eastlake game:

All season, the Vikings have counted on junior running back Jayden Limar to provide a spark for the offense. With Limar battling an illness and injuries on Saturday, it was his little brother – ninth grader Jayshon Limar – who helped ensure the Vikings’ spot in the championship game.

Jayshon Limar rushed for 75 yards on 12 carries and three touchdowns to help lead the Vikings past the Wolves. Limar had 10 rushes for 68 yards and two touchdowns, including the game-clinching 29-yarder late in the fourth quarter, after halftime.

“That feels great for me,” Jayshon Limar said of his performance. “I’m just glad that (Coach) Tri trusts me and that he’s able to get me the ball and I was able to show him what I can do.”

Tri wasn’t surprised the newcomer stepped up for his brother on the big stage.

“When Jayden is out there, he’s our electricity, but when Jayshon comes out we don’t change what we’re calling,” Tri said. “We expect him to carry the load just like Jayden has been carrying the load. It’s pretty rare to say in 22 years of being at Lake Stevens, but I can’t remember the last time I’ve ever said that about a freshman. Literally, we’re riding a freshman to the state championship right now. It’s pretty impressive, to say the least.”

Limar wasn’t the only standout for the Vikings as senior quarterback Grayson Murren completed 34 of his 44 passes for 340 yards and two touchdowns. His favorite target was senior receiver Drew Carter, who caught 13 passes for 166 yards and both of Murren’s touchdown passes.

“We’ve built that up since we were like 9,” Carter said of the connection between he and Murren. “That’s my guy. I’ve known him forever. That’s my brother.”

THE PLAY THAT TURNED THE TIDE

The biggest play Carter and Murren made together was on fourth and-goal from the Eastlake 4-yard line with a three-point lead midway through the fourth quarter.

The Wolves needed a stop to have a chance to drive the field to tie or take the lead, but after contemplating kicking a field goal, the Vikings went for it – and Murren found Carter in the end zone for the touchdown to take a 38-28, all but sealing the win.

“We were going to kick a field goal because I figured we needed the points, but a field goal would only put us up by six,” Tri said. “The whole offense was over there saying, ‘Why aren’t we going for it? We’re going to score.’ I figured I should probably listen to my team here. We drew up a play that we thought was going to work, and it did.”