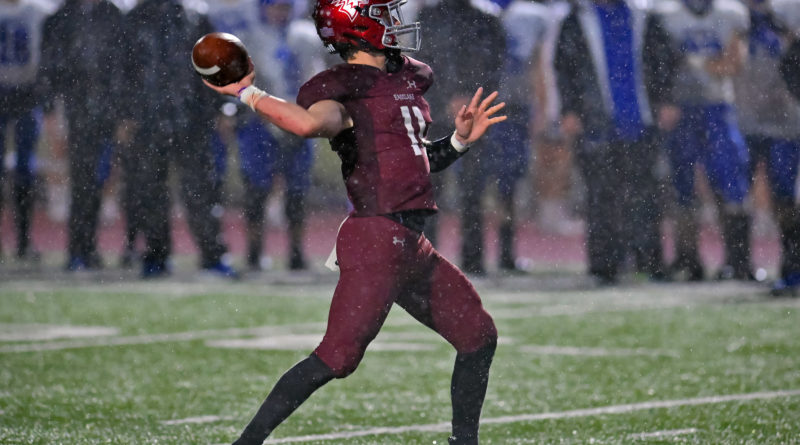 As a result, their respective teams are in the Class 4A semifinals – and face off Saturday at Pop Keeney Stadium in Bothell.

The amazing thing about both of their ascensions into all-league players is that they’ve taken similar wait-and-play journeys to the starting job as seniors.

Murren’s path was blocked by two-time all-4A Wesco performer Tanner Jellison for two seasons. But coach Tom Tri was excited when it was time to hand the reins of the Vikings’ offense over to the dual threat.

“We were definitely cautiously optimistic that he would be a stud for us,” Tri said. “He can make all the throws. He has the feet. It just really came down to his decision-making, and experience facing live bullets.”

Tri said Murren’s first couple of throws in his first varsity start against O’Dea were off target because he was “so amped up.” After that, he settled down and led the team to a victory over the then-No. 1 team in Class 3A.

His season has had one hiccup – an injury.

Murren played the final few minutes against Kamiak with a fracture in his leg, which sidelined him for three weeks. He returned to the helm Saturday, leading Lake Stevens to a 35-14 win over Gonzaga Prep.

“I’ve been extremely impressed with his ability to pick up things quickly – and fluently,” Tri said. “But the one thing we underestimated with him is how competitive he is. That kid does not like to lose.”

On the other side, first-year Eastlake coach Kyle Snell said he didn’t need a varsity game to really know Barrysmith would flourish at quarterback.

“We played O’Dea at team camp,” Snell said. “Parker made some throws with some of their big dudes in his face, and (offensive line) coach (Mike) Linker runs up and goes, ‘Did you see him throw the ball with that guy bearing down on him?'”

Barrysmith is a slippery gun-slinger who has a knack of making big-time throws on the move.

And with 2,565 passing yards and 30 touchdowns, he’s on the verge of rewriting many of the school’s single-season records – many of them held by Ben Howard (2016).

“He is giving guys a chance to make plays all the time, or he is making the right decision so we live to see another down,” Snell said. “Our guys have incredible confidence in him.

“He is playing really, really great football. Nothing seems outside his comfortability right now.”

What to watch for: These are a pair of fun, splashy offenses that can put up points in a hurry. And the Vikings’ ability to attack all quadrants of the field, in a variety of ways, was on full display in their 35-14 state quarterfinal win over Gonzaga Prep. With ATH Trayce Hanks’ short-space game-breaking ability, RB Jayden Limar’s capability of running with power and speed, WR Drew Carter’s downfield pass-catching savviness, and QB Grayson Murren’s aptness to make it all go – Lake Stevens tests all aspects of a defense. But Eastlake is made up of big-and-fast player roster on both sides, and will surely stress the Vikings’ secondary with big-play WRs Will Eaton and Noah Weintraub on the outside – and a trio of tailbacks who can soften up the interior of a defense. Whichever team can string together defensive stops should be the one left standing in this expected shootout.

What to watch for: It will be a chess game with lots of moving parts – particularly at quarterback with Graham-Kapowsin’s Joshua Wood and Kamiakin’s Henry Mercado, both of whom can make a game-changing play out of chaos with their arm or legs (and both are respective fall league MVPs). But aside from individual heroics, the offenses largely get things done in different modes. Kamiakin aims to spread defenses out, and allow its athletes to work in space, led by RB Luis Salgado and do-everything WR Peyton Graham. Expect the Braves to test an Eagles’ defensive backfield that struggled in their state quarterfinal victory over Bothell. And Graham-Kapowsin’s pro-style power run game has yet to be slowed down, paced by RB Zackary Lee (and has been especially effective against 3-3 defenses like Kamiakin’s). Points will likely be put up, the question is – which team’s pace will create the best offensive rhythm.