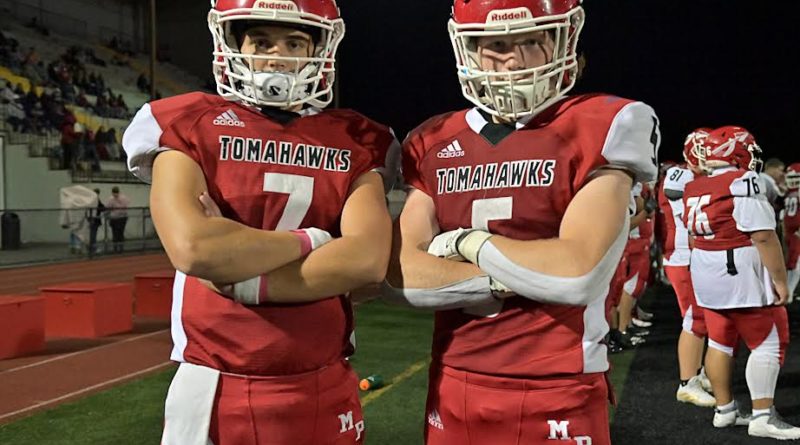 Dylan Carson cemented himself in his 113-year old school’s history when he rushed for a record 427 yards and five touchdowns in a win over No. 4 Yelm last Saturday to lead No. 5 Marysville-Pilchuck to its first state semifinal since 2014.

The senior running back’s high-achieving season has vaulted him into the WIAA state record books. And when the team plays top-seeded Bellevue (12-0) at 1 p.m. Saturday in Seattle’s Memorial Stadium, he has a chance to climb even higher.

His 46 touchdowns scored this season ranks the third-most in state 11-man football history, according to WIAA football record-keeper Dave Maley. He’s No. 10 in single-season rushing yards with 2,567 and 114 yards away from cracking the top five.

Becoming an all-time great was never Marysville-Pilchuck senior Dylan Carson’s ultimate goal. He just wanted to be a 2,000-yard back.

“I felt that was the prestige of being a great high school running back,” he said.

The senior has out-paced even his own expectations.

And in a way, his record-breaking senior season has been his life’s work.

He went from being a mainstay on the sidelines with his father, head coach Brandon Carson, as ball boy starting at eight years old.

“It felt like I was a part of (those) teams, growing up with those guys,” Dylan Carson said.

He set his mind on 2,000 yards after going for more than 1,400 as a sophomore. His training over the last two years has centered on maintaining and building on his speed and explosiveness while growing to put on more than 30 pounds in two years. He works closely with trainers who focus on Olympic-type lifts centered around building explosiveness. That means a lot of dead lifts, power cleans and snatches.

“When you have speed, it makes life a lot easier,” Dylan Carson said. “Instead of having to juke guys or run over guys, you can just break ankles.”

As he hit a growth spurt during the early days of the pandemic, he continued to pack muscle onto his frame. By expanding his physical limitations, he hoped his confidence in his own abilities would grow. That trust has extended to his offensive line, which he calls “star-studded,” led by seniors Nate Elwood and Kaleb Potts.

The last time Pilchuck was playing in a state semifinal game (2014), Dylan was a sixth grader on the sidelines as a ball boy. This week, his family has been sharing a screen shot from the television broadcast of that game that shows him next to his father.

He’s visualized himself on this stage ever since.

“We all set goals that are really high that we hope to achieve that are sometimes just out of reach,” he said. “It finds me content to know my hard work and achievements are being met and exceeded upon the dreams I set 10 years ago.”

What to watch for: Can Myles Mayovsky and Kennewick’s offense, which looks increasing more balanced each week of the postseason, find the endzone against, bar-none, the toughest defense in the state? Eastside Catholic’s front seven is stout, its secondary loves to force turnovers and the entire defensive unit has asserted an opponent third-down conversion rate below 20 percent. The Lions will need to move the ball and can do that with Myles Mayovsky, who ran for 132 yards against O’Dea, and quarterback Dayton Davis has reliable targets how wide in Austin Stoddard and Simeon Howard. The key to staying close with the Crusaders isn’t keeping their offense off the scoreboard, but instead their defense. The Crusaders will find ways to turn you over and has a defense that has scored at an impressive clip. And don’t sleep on its offense, either, which has showed flashes. Wideout Dallas Daley had 171 receiving yards and three touchdowns in the quarterfinals.

What to watch for: There are more similarities than differences between Bellevue’s old-fashioned wing-T and Marysville-Pilchuck’s slot-T. “It’s just old-school football, every aspect of it,” running back Dylan Carson said. Bellevue’s game plan will start with trying to slow Carson and Velasquez and disrupt a stout, sound offensive line led by Kaleb Potts and Nate Elwood. Elwood is questionable to play after leaving the quarterfinal game with an injury, but M-P is plenty deep in the trenches to make way for Carson, who is climbing the state record books, and his counterpart Jordan Velasquez, who surpassed 1,000 yards on the season last week. The Wolverines themselves boast a dynamic rush attack and a sound O-line. Willy Wang, Bellevue’s leading rusher, is coming off of a 196-yard and career-high five touchdown performance. Him and Blake Teets have combined for more than 2,500 rushing yards on the season, and are complemented by Pac-12 defensive back target Ishaan Daniels’ game-changing speed around the edge. Zero in one one of them, or try to slow all three? Winner could depend on which defense stays more disciplined.