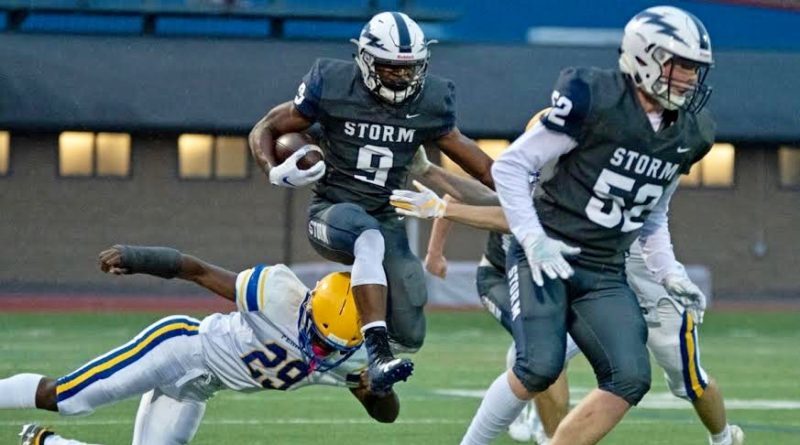 Squalicum High School football coach Nick Lucey could see the high-ceiling backfield potential from the very first time they stood next to each other.

It just took a few months for that vision to hit full throttle.

As the Storm prepare for its Class 2A semifinal showdown with top-ranked Tumwater, the tandem of quarterback Leyton Smithson and running back Djouvensky Schlenbaker is coming off its best game together.

In the team’s 62-38 win over 2A GSHL champion Ridgefield, Smithson had 367 yards of total offense and five touchdowns (and started at cornerback for the first time) while Schlenbaker — arguably the state’s top senior tailback recruit who has committed to Washington State University — added 151 rushing yards and four touchdowns (two scores were on defense).

“Two guys with elite speed in the backfield – that is a dangerous punch,” Ridgefield coach Scott Rice said.

Schlenbaker was slow to recover from an offseason ankle injury, and did not look like his usual self until Week 7 against Sedro-Woolley, Lucey said. And Smithson – who moved back to Bellingham after spending his entire high school career in Idaho – was nursing a shoulder injury in the early part of the fall as well.

But over the past month, both began rounding into top form. And that showed up Saturday in the 2A quarterfinals.

“This is what we envisioned,” Lucey said. “We have a bunch of guys to get the ball, too … but when we spread things out, it opens up the run game.”

Folks in Whatcom County are used to vintage Schlenbaker – speed, power, patience and versatility as a pass catcher, all in one package.

But Smithson, who was a running back at Mountain View High School in Boise, has turned heads, too. The fastest guy on the team, he was just offered by WSU as a a safety – and BYU is coming up for a visit to look at him as a cornerback.

As a passer, Smithson “has got a strong arm, but he has great touch, too,” Lucey said.

As a runner, Smithson is a blur, and can make an over-pursuing defense pay dearly on cutback runs, which usually turn into long touchdown scampers.

What to watch for: For as different as their state-playoff traditions are – this will be Lynden’s 20th semifinal appearance, compared to the Vikings’ first berth – the way they got to this juncture is very similar. Both teams prominently feature dual threats under center in North Kitsap QB Colton Bower and Lynden QB Kaedan Hermanutz (with Max Moore in the bullpen) – and have sound defenses that rarely give up the big play. The question is – will this be the game Bower (ankle) is unleashed as a runner? North Kitsap has utilized him in that capacity on a limited basis, especially since he was injured late in the regular season. But the Lions had their hands full with other mobile signal callers Leyton Smithson, of Squalicum, and Zach Watson, of Burlington-Edison, during league play. In game that could very well be close, Lynden does have distinct advantage in special teams, especially with the big leg of all-state PK Troy Petz.

What to watch for: Are these the two most dynamic teams remaining in the 2A playoffs? If you look at the skill-position threats on both sides, a strong case can be made. The duo of RB Peyton Hoyt (outside runner) and FB Carlos Matheney (inside hammer) make it difficult for defenses to gang up in one area of the field against Tumwater’s Wing-T rushing attack (296.6 yards per game). But Squalicum has the offensive firepower to match with QB Leyton Smithson and RB Djouvensky Schlenbaker (WSU commit), who accentuate the Storm’s biggest advantage in this game – team speed. For that to happen, Squalicum’s much-smaller offensive line has to fend off DEs Ryan Otton (UW) and Austin Terry (Boise State), both FBS commits. But if that dangerous backfield duo can get to the flat, and next level of the Thunderbirds’ defense – big plays could be had. Teams met in back-to-back years in 2A quarterfinals (2014, 2015), won by Tumwater.