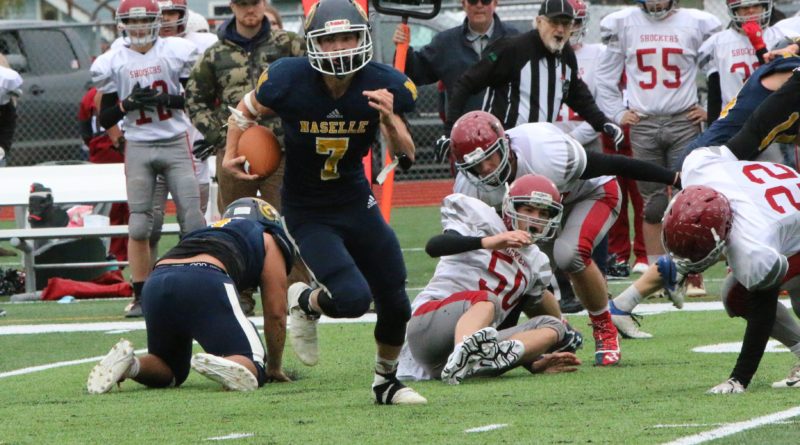 When Kevin McNulty was first hired over the summer to take over for longtime friend Jeff Eaton as football coach at his alma mater Naselle, he knew two things.

The Comets had won a lot of football games over the past two seasons. And in year one, they would go as far as their talented core — led by standout quarterback/middle linebacker Joey Strange — took them.

So when Strange tweaked his hamstring injury before the season opener, McNulty was forced to adjust on the fly to life without its program cornerstone. Nearly three months later, as the Comets prepare for a Class 1B state semifinal matchup with top-seeded Almira-Coulee-Hartline (10-0) on Saturday, he believes the team is better for it.

“We went from what we believed was a three-headed monster with Jason Harmon (WR), Kolten Lindstrom (RB) and Jimmy Strange, to playing against Lummi with a freshman quarterback,” McNulty said.

Without Strange’s injury, Jacob Lindstrom may not have gotten the chance to step in under center, learn how to run the offense on the fly and rack up an efficient 66 percent completion rate and toss 11 touchdowns opposite three interceptions as a first-year high school student.

“It’s the thing that’s going to be overlooked the most,” McNulty said. “We’re here because of a lot of the things that Jacob has done for us this season.”

Without Strange, the Comets lost to Lummi 58-20 after eking out a 48-42 overtime win over Neah Bay to open the season. The loss ended a 24-game regular season win streak — many of them won while Strange’s older brother, Jimmy Strange, was captain.

Last Saturday, Strange led the Comets to a win over higher-seeded Pomeroy on a cross-state road trip. He will make another start at quarterback against ACH.

Naselle knows how tall of a task the No. 1 Warriors present. Beating ACH and its juggernaut defensive line — led by two-headed monster Cooper Corriea and Reece Isaak — will likely require the rush-first Comets to turn to its passing.

It was also require Strange at his best. Finally, he’s able to give that.

“When he tries to break tackles, he runs hard and he doesn’t go down easy,’ McNulty said. “When there’s someone in his way, he’s got a magnet attraction to go run them over even though he’s 165 pounds.”

Naselle has been playing winning football for years. But 2019 marked the program’s first time competing for a state championship in recorded WIAA state history when it finished state 8-man runner-up to Odessa.

McNulty, who made previous coaching stops at Ilwaco, Sequim and White River, has Naselle — the lowest seed left (No. 5) — on the doorstep of a return trip.

What to watch for: Odessa has won in blowout fashion ever since its 50-20 humbling at the hands of Almira-Coulee-Hartline in Week 6, including a 62-22 cruise past Liberty Bell in the quarterfinals. In order to book a chance at a rematch, it must slow a Rangers team that has owned the west side of the state and road a 30-point third quarter and 337-yard rushing performance from Bishop Budnek to beat an upset-minded Winlock in the quarters. Both teams will look to run, but both similarly can pass enough to keep defenses off balance. The team that wins the battle in the trenches will be the heavy favorite.

What to watch for: ACH put itself in the driver’s seat as the 1B state favorite after dealing two-time defending state champ Odessa its first loss since 2017, and in blowout fashion. The Warriors’ season has been so dominant, its JV quarterback — freshman Carter Pitts — leads the team in rushing and passing. Its mammoth defensive front led by Reece Isaak and Cooper Corriea wreak havoc on opposing QBs. A rematch with the No. 2 Tigers could be in store, but ACH must clear now-fully healthy Naselle and tough, elusive quarterback Jimmy Strange. The Comets will need to throw the ball more than used to — and score big in a shootout.