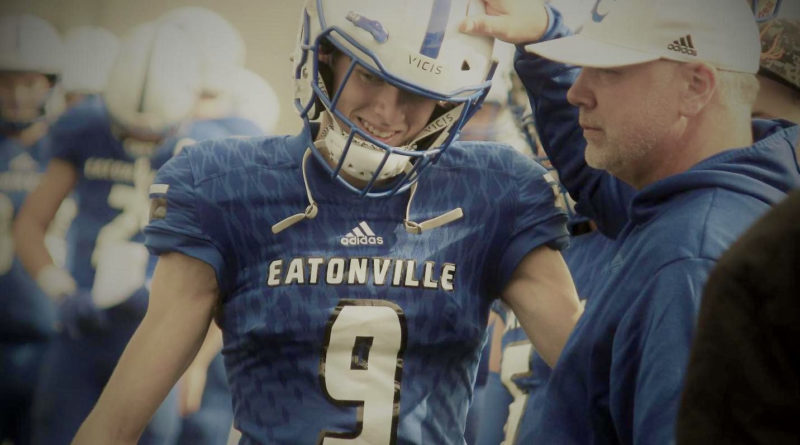 Bobby Lucht doesn’t wax poetic about leading Eatonville to a state title as a sophomore in 1992. Nor will he remind you about when he set the national high school record for 132 career touchdown passes.

Over the years, his son Jakob Lucht has learned more about how his father is one of the most accomplished high school football players in state history through his grandfather and his dad’s peers than from his father himself.

“It takes somebody else to bring it up,” Bobby Lucht said.

As the Luchts have become a bridge from one heyday of Eatonville football to another, those stories have become harder to ignore.

When the No. 2 Cruisers take on No. 3 Lynden Christian 5 p.m. Saturday at Art Crate Field, Jakob, a senior and the Cruisers’ leading receiver, is also looking to bring Eatonville one step closer to its first state title since his dad was quarterback — and add a second trophy to his family collection.

Eatonville’s 26-23 win over Zillah in the now-demolished KingDome in 1992 was its third “Kingbowl” in eight years under head coach Steve Gervais.

Bobby shared co-State Player of the Year by The Seattle Times with Puyallup’s Brock Huard in 1994.

But he hasn’t gone farther than showing Jakob and his friends old VHS tapes of that title game, as well as the thrilling Class A state double-overtime semifinal win over Meridian that preceded it (Tom Zurfluh, the Cruisers’ current special teams coach, kicked the game-winning field goal in 2OT).

Now, as today’s iteration of the Cruisers — who have only played in one game decided by less than a touchdown all fall — are on the precipice of that stage, he’s started resurfacing lessons from that run, starting with the win over Meridian, which required a furious second half comeback and a rare Meridian fumble in the second overtime.

“There’s a lot of talk about if our team now was put into a situation like that,” Bobby Lucht said, “if we played terrible in the first half, how would our team now be resilient to be able to compete and comeback in games like that when you’re faced with adversity?”

Bobby started coaching Jakob when he was in elementary school in the Junior Cruisers youth football program. Jakob chose to play receiver because, according to his father, of the pressure that would rest on his shoulders taking on the same position as his dad.

As Jakob has accrued a team-high 742 receiving yards and 11 touchdowns catches as a senior, his dad has had a front row seat from the sideline.

What to watch for: These teams share more in common than they do differences. Big — err, huge — up front. Disciplined defensively. Balanced offensive attack. How to split hairs in a game that could go a number of ways may depend on which red zone defense is more successful. The Lyncs have a savvy dual-threat in Will olwell and unlocked their run game since moving Nooksack Valley transfer Kade Eldridge from tight end to running back, but Eatonville’s offense is chameleon-like, vacillating between an explosive spread with Job Kralik and Jakob Lucht out wide, to more heavy-set looks that showcase its run game. One team has seen both of them this season: Tenino, which lost to LC 49-18 in the quarterfinals and a Eatonville 24-22 in Week 5. Their read? “It’s really funny how similar both these teams are,” said coach Cary Nagel, whose Beavers rushed for 477 yards against the Lyncs.

What to watch for: Royal has not played a close game since the 2019 1A state title game. What’s the case for King’s, which last made its playoff appearance in 2015 and lost to Royal in the state title game, playing spoil? Everything runs through QB Hayden Teeter, and the Knights (of Seattle) ran all over Lakeside in the quarters — secondary back Cutter Rolfs had 233 rushing yards. They also have size up front and send lots of pressure into the backfield. It frustrated Zillah junior QB Jon VanCleave and limited NEA MVP Kole Hunsaker of Lakeside’s productivity. Can it slow hard-to-faze Derek Bergeson? King’s has to travel to Royal City to do it.