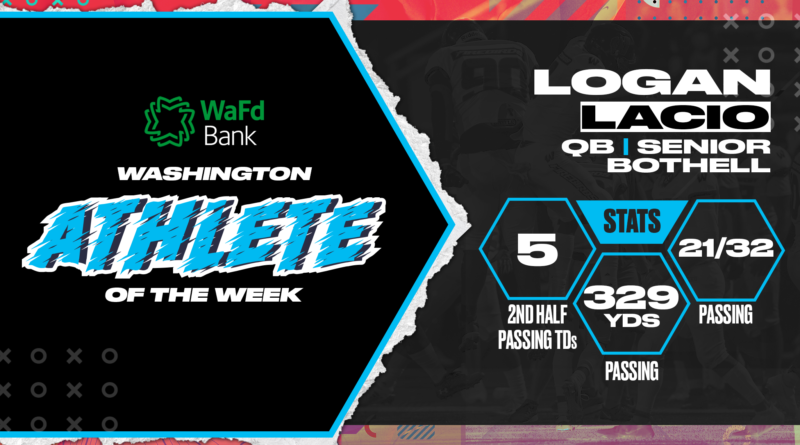 The senior went 21 for 32 passing for 329 yards and five second-half touchdowns as the Blue Train scored 35 unanswered points in a 49-35 first round win over Glacier Peak on the road.

Lacio received 30.24% of the vote, beating out Rainier Beach’s Chance Guadiz who finished second with 22.52%. Freeman’s Boen Phelps finished third with 17.93% and Gonzaga Prep’s Kate Palelek finished fourth with 7.53%. There were over 109,000 votes tallied this week!

Flerchinger had 16 kills and 15 digs in the Highlanders District 8 2A title sweep over Clarkston.

Anderson had 44 digs, 24 kills, and 2 aces in the Class 1B state title match- the Nighthawks beat Mossyrock for the state title.

Jones had a goal and an assist in State 2A quarterfinal win against West Valley.

Won the 200-yard freestyle state championship by more than two seconds with a time of 1:55.87 as part of a two-title day.

Moeller had 10 kills in the Panthers’ District 8 3A title sweep over Mt. Spokane.

Turned 18 carries into 116 rushing yards, including a 29-yard touchdown run early in a 27-14 2A first round win over Orting.

Rushed for 146 yards and a touchdown on nine carries in a 42-21 first round win over Lakes.

Took 12 carries for 142 rushing yards and three touchdowns in a 50-0 win over Granite Falls.

Connected on 12 of 18 pass attempts for 253 yards and four touchdowns to help Rainier Beach beat Peninsula in the 3A state opening round on the road, 36-21.

Finished with 132 receiving yards, including a 77-yard touchdown haul, in a 26-22 first round win over Mount Baker — the Wildcats’ first playoff win since 1990.

Caught 12 passes for 124 receiving yards and two touchdowns in a first round loss to Enumclaw.

Rushed for three touchdowns and returned a punt 80 yards for a fourth in the T-Birds’ 56-7 win over 16-seed East Valley of Spokane.

Rushed 23 times for 139 yards and the game-sealing one-yard touchdown punch to give Rainier Beach its winning margin — 36-21 — in a first-round road victory over Peninsula.

Multi-faceted offensive dynamo went out with a bang, running for 229 yards and four touchdown on 23 carries and catching three passes for 36 yards in a 49-35 loss to Bothell.

Sophomore linebacker ripped out and scooped up a fumble for a 68-yard touchdown and was part of a defense that forced five turnovers.

Rushed 19 times for 135 yards and two touchdowns and caught the 30-yard game-winning touchdown on a play he called in a thrilling first round state 4A comeback win over Spanaway Lake.

His three interceptions helped the Spartans post a second-half shutout in a 24-10 first round 4A playoff win over Skyview.

Completed 16 of 25 pass attempts for 311 yards and six touchdowns in a 56-21 first round win over visiting 13-seed North Creek.

Rushed for 167 yards and two touchdowns and caught a third in the Sentinels’ opening-round 30-13 win over Othello.

Tossed for 176 yards and two touchdowns to hold off visiting Montesano 27-0 in the first round.

Took 19 carries for 156 yards, two touchdowns and a game-sealing interception in a 38-28 win over Hockinson.

Sealed his program’s first state playoff win since 1990 — 26-22 over Mount Baker — with an interception in the final minute, as well as a 17-23, 293-yard, three touchdown passing performance.

Dual-threat signal-caller torched the Tenino defense. He accounted for eight touchdowns in Freeman’s 80-55 loss to Tenino, throwing for five and rushing for three, including scoring runs of 63 and 67 yards.

Completed 26 of 40 pass attempts for 340 yards, three touchdown passes, an interception and 30 rushing yards on five carries in a 34-29 2A first round win over W.F. West.

Rushed 14 times for 231 yards and six totals — five on the ground and one via fumble recovery in the endzone — in a 49-14 win over Highline.

Returned a kickoff 98 yards and had a 77-yard touchdown in Bellevue’s 42-21 first round win over Lakes.

Caught four passes for 70 yards and a career-high three touchdowns, capped by a 23-yard scoring reception from QB Colton Bower with 22.6 seconds left in the first half of a 42-0 2A first round win over Shadle Park.

The playmaking quarterback wasn’t stopped or slowed in his last high school game. He took 23 carries for 138 yards and went 16-for-32 passing for 276 yards in a season-ending 52-28 loss to 2-seed Yelm.

Caught seven passes for 135 receiving yards and a 73-yard kickoff return for touchdown in a 27-14 2A opening round win over Orting.

The junior caught six passes for 161 yards and two touchdowns in a thrilling 26-21 first round loss to Kennewick.

There were plenty of rushing yards to go around in Tenino’s 806-yard ground performance. Watson had 274 of them, as well as six touchdowns in an 80-55 win over visiting Freeman.

If he’s been rattled at any point this season, the Eastern Washington commit hasn’t showed it. He completed 12 of 13 pass attempts for 218 yards and three touchdowns as the top-seeded Eagles beat 16-seed Kentwood, 49-7.Share on FacebookTweet