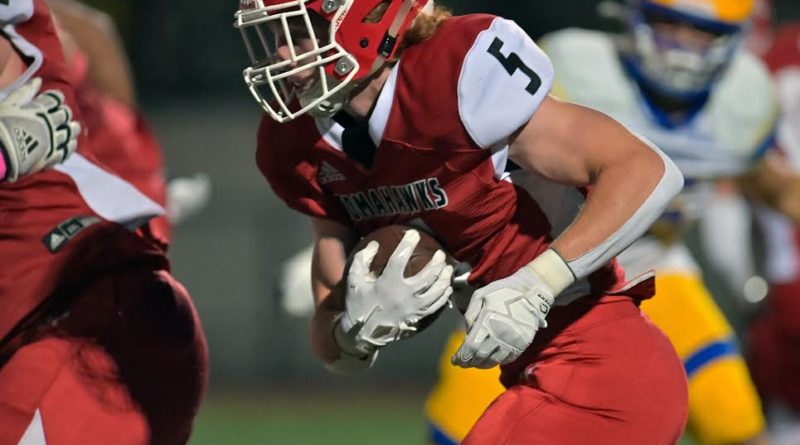 There weren’t many he didn’t hit.

The senior running back rushed for a career-high 427 yards and five touchdowns to lead 5-seed Marysville-Pilchuck to a 39-21 win over 4-seed Yelm on Saturday afternoon, sending his school to just its third state semifinal appearance in school history and leaving his coach — and dad — near-speechless.

“Dylan was absolutely phenomenal today,” head coach Brandon Carson said of his star running back, who is also his son. “He busted a couple big ones, got some tough yards.”

Yelm running back Brayden Platt tied the game at 14-14 midway through the second quarter with a 15-yard touchdown run and ensuing two-point conversion. Platt became eligible for the game Monday after winning an appeal stemming from a first round ejection.

But the Tornados high-octane spread offense couldn’t match Dylan Carson and Marysville-Pilchuck’s slot-T offense, who had an answer for each Yelm touchdown.

Dylan Carson’s fourth and fifth touchdowns — 90 yards and another a 53-yard burst up the middle — put Pilchuck up 39-21 with just over seven minutes left. An interception on the next served as the proverbial nail in the coffin.

“Defensively we did a good job of keeping everything in front of us,” Brandon Carson said.

Yelm, which was undefeated entering Saturday’s contest, is set to return the bulk of its core next year.

Marysville-Pilchuck will face top-seeded Bellevue, which beat Rainier Beach Friday night, next Saturday in the 3A state semifinals — a clash of similar styles, the Wolverines running the old-school wing-T.

“Just to get one more week with this senior group, it’s a special, special crew,” Brandon Carson said, standing outside a raucous postgame locker room. “You never want practice to end and here we are, in the final four.

On Saturday, the junior running back gave it a new meaning. He rushed for 233 yards on 26 carries to lead No. 5 King’s to a 10-7 win over No. 4 Lakeside of Nine Mile Falls at Union Stadium in Mead.

Rolfs’ performance was also a show of health. He missed a game earlier in the season with an injured ankle, and had played the last several games at less than 100 percent, Shapiro said.

The Knights controlled the game with a combination of turnover defense and an effective run game. They ran 19 more plays, out-gaining Lakeside 374 to 157 on offense and rushed for 266 yards to Lakeside’s two.

Junior defensive back Maddox Boyce intercepted 1A Northeast League MVP Kole Hunsaker three times. One of them set up the Knights’ lone touchdown of the game, a 56-yard run by Rolfs, who entered the game as the team’s second-most productive rusher.

King’s (9-1) will face top-seeded Royal in the 1A state semifinals in a rematch of the 2015 1A state title, which Royal won 28-7. King’s is in the state playoffs for the first time since that run, and this year’s team reminds Shapiro of that group in more ways than one.

“I don’t think we play with a chip on our shoulder like we have to prove something to someone,” Shapiro said, “but if you look at the state map, this was just a great game to say King’s football is definitely on the rise.”

An 11-yard pass from Colton Bower to sophomore standout Logan Sloman and the pair of interceptions that followed helped 3-seed North Kitsap pull away from 6-seed Steilacoom on Saturday evening at North Kitsap Stadium.

The Vikings (12-0) beat the Sentinels 28-13 to advance to its first state semifinal in program history, where they face No. 2 Lynden next Saturday. And for a talent-laden team that has cleared one opponent after the next with its high-powered offense, it escaped the 2A quarters with defensive playmaking.

“So proud of our kids for the grittiness, toughness and competitiveness they’ve shown this whole season, really,” NK coach Jeff Weible said.

After Bower’s pass to Sloman on a circus route put NK up 21-7 midway through the fourth quarter, Bower picked off a pass on the next drive. Then on the following drive, Matt Opplinger returned another pick 50 yards for touchdown to put the game out of reach with under four minutes left.

Before that, the Sentinels were well within reach. Ashton Dilly’s 34-yard touchdown reception pulled them within 13-7 midway through the third quarter. But Steilacoom’s offense struggled to find a rhythm all night.

“What we have going for us is we can match the speed of a lot of other teams,” Weible said. “That’s something we haven’t had in the past.”

The Vikings also have belief and a dose of self confidence, which Weible says pairs nicely with a team that practices well — and a coaching staff whose approach has laid out game plans for 12 wins and counting.

“We say all the time in our program we win Monday through Thursday,” Weible said. “I just don’t think there’s a better coaching staff in the state who gets prepared based on what an opponent does. In the last couple weeks, I haven’t seen a play by the other team we haven’t repped in practice three or four times.”

NO. 2 EATONVILLE, NO. 3 LYNDEN CHRISTIAN WIN BIG TO SET UP 1A SEMIFINAL SHOWDOWN

The stage was set on Saturday for one of the most highly anticipated state semifinal matchups across all classifications.

And it’s not even Royal-Eatonville, which have both occupied the top two spots in SBLive’s 1A power rankings since the preseason.

The Lyncs (7-2) were dealt early season losses by 2A opponents Lakewood and Burlington-Edison, only to win seven straight behind a stout defensive front, a sure-handed quarterback in Will Colwell and tight end-turned running back Kade Eldridge, whose contributions to their rush attack have added a dynamic element to the team’s offense.

“It should be a good matchup,” Cruisers coach Gavin Kralik said Saturday night. “Really looking to playing those guys, they have really good talent and coaching alongside that — that’s how you get better.”

Eatonville on the other hand, rattled off 21 unanswered points against Riverside to move to 12-0 entering the matchup and has blown out every opponent it has faced except one — Tenino, which it edged 24-22 in Week 5.

On Saturday, Lynden Christian made quick work of the Beavers, who rushed for more than 800 yards the previous week.

At a time of year when stakes are raised and opponents get tougher each week, Kralik is impressed with his team’s poise.

“They’re just a really mature group, really unselfish, care a lot about each other,” Kralik said of his upperclassmen-laden team, which started 10 seniors on defense.

Whoever wins will face the Royal-King’s winner in the 1A state title game.

William Wang’s career night lifts No. 1 Bellevue over Rainier Beach, back into 3A state semifinals

Finally tested, No. 1 Graham-Kapowsin sticks with its gut-busting run game to turn away Bothell

Payton Graham, Kamiakin stave off upset-happy Camas to reach 4A state semifinals: ‘We had to make it count’