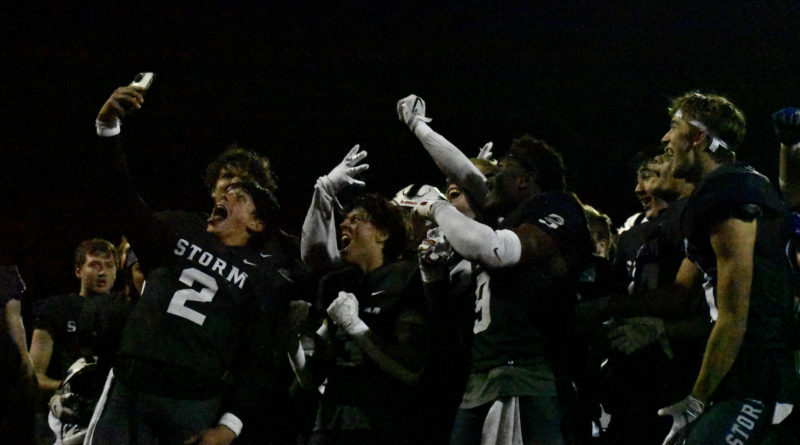 On paper, No. 4 Squalicum versus No. 5 Ridgefield in the Class 2A quarterfinals looked like it was going to be a battle.

In reality, not so much.

The Storm had no problem with the Spudders in a 63-38 win Saturday at Civic Stadium, advancing to the 2A state semifinals for the first time in school history.

The Squalicum coaching staff has a luxury in the backfield of dual-threat quarterback Leyton Smithson and Washington State commit Djouvensky Schlenbaker.

Teams have had trouble all season slowing down the two and head coach Nick Lucey knows that.

SPUDDERS WITHIN REACH, BUT NEVER FOUND ANSWER ON DEFENSE

A Ridgefield touchdown on a 25-yard reception by Landon Kelsey from Logan DeBeaumont right before halftime put the score at 28-17. The Spudders were still trailing, but the score before half gave them momentum.

Squalicum received the ball to start the second half and on the Storm’s first play, Smithson took it 58 yards to the house and suddenly it was a three-score game.

On Ridgefield’s ensuing drive, Schlenbaker intercepted DeBeaumont and ran it back for a score to give the Storm a 42-17 lead.

The Spudders put themselves in a four-score hole less than two minutes into the second half.

There were plenty of times Squalicum could’ve lost momentum in this game.

The Storm were called for more than 15 penalties, slowing themselves down on offense and giving the Spudders multiple first downs to sustain drives.

Each and every time though, the defense would tighten up or the offense would rattle off a big play.

“We’ve got a resilient group. We’ve got a team that’s played a lot of football, a lot of seniors. They get it,” Lucey said. “These guys know that’s part of playing, especially playing with an edge. It’s a testament to them to not get discouraged and keep playing.