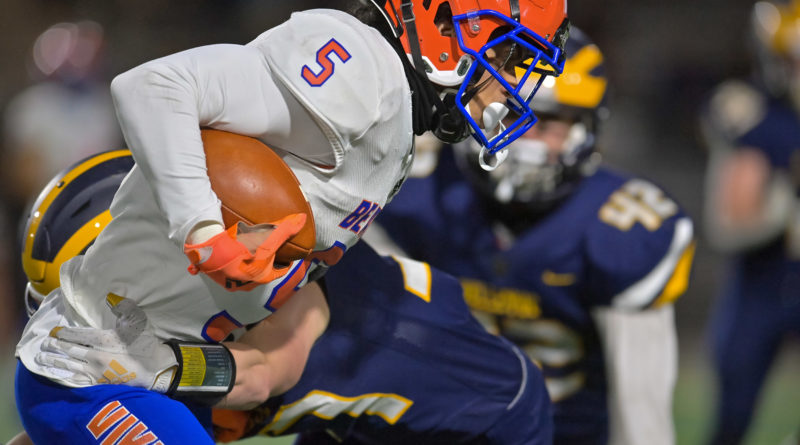 Each week, SBLive ranks the top 25 teams across the state of Washington regardless of classification. Here’s a look at how those teams fared in games played in Week 12 – or the quarterfinal round of the state playoffs – of the high school football season.

Big hurdle to clear for Eagles, whose last loss was to this team in 2019 4A quarterfinals. Run game rolls up 342 yards, led by RB Zackary Lee’s game-high 164 yards.

RB Jayden Limar and ATH Tracye Hanks run it and catch it; WR Drew Carter has hands of glue – and QB Grayson Murren is back. Versatility makes Viks tough out.

Coach Dave McKenna said he was “greedy” going for it on fourth-and-short in own territory. It backfired – and once Viks grabbed lead, they never relinquished it.

Even against one of the state’s top defenses, WR Payton Graham’s impact felt – two rushing touchdowns, a receiving score and a pass that set up final touchdown.

When needed, they seem to plug into uncanny big-play scoring ability – and did with 99-yard catch and 100-yard interception return to earn first semifinal berth.

They thought they had momentum, cutting it to 26-21 and backing Wolves up to their own 1. Then, defense gives up a 99-yard touchdown to WR Noah Weintraub.

RB Dylan Carson (career-high 427 rushing yards, five TDs) is now No. 3 in state history for single-season touchdowns (46) – 4 away from tying the WIAA record.

Difficult to pinpoint when this offense is due for a break out or bog down – on Saturday, it scored on four consecutive trips to take control of Wildcats.

Credit the 4A GSHL champions for erasing early 14-0 deficit, but once Papermakers’ run game dried up in second half, so did valiant 4A championship reign.

If somebody wants to knock off No. 1 Graham-Kapowsin, might take a hard look at Cougars’ blueprint – blitz QB Joshua Wood on defense, pass often on offense.

Wildcats comes out with a bang, driving 57 yards for Brady Speer’s 4-yard touchdown run on their opening series. After that, it was a struggle to see the end zone.

Gut punch came after Viks open second half on long drive (Scott’Tre Humphrey TD) to cut it to 28-15, only to have Ishaan Daniels answer with quick 62-yard score

Season over after 26-21 loss to Kennewick in the first round of the state playoffs.

Season over after 49-35 loss to Bothell in the first round of the state playoffs.

QB Kevin Wulff tosses three touchdown passes, and WR Job Kralik has receiving and rushing score as Cruisers in 1A semifinals for first time since 2014.

Season over after 38-24 loss to Mount Spokane in the first round of the state playoffs.

Season over after 17-7 loss to Camas in the first round of the state playoffs.