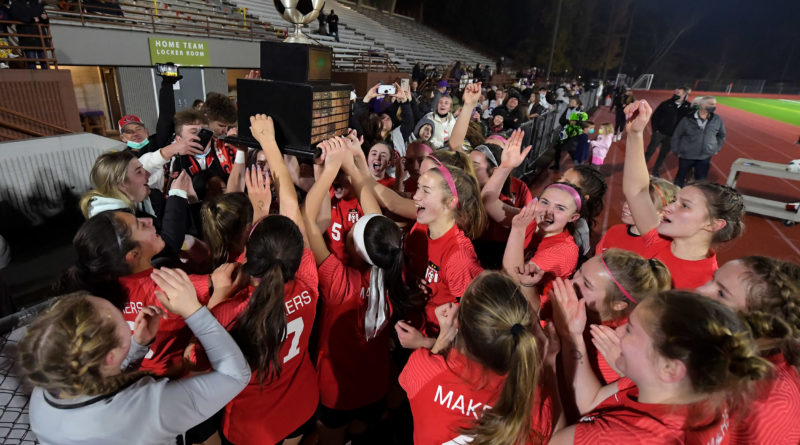 PUYALLUP – Sometimes the margin for winning in soccer is razor-thin. And that usually means happy tears compared to sad tears.

And, when it comes down to overtime shootouts, the high and lows seem more definitive.

It usually takes one break or one clutch save from a goalkeeper.

For Camas, it got a pair of overtime shootout saves from junior goalkeeper Keely Wieczorek and the decisive penalty-kick goal from junior Nora Melcher and suddenly the Papermakers were hoisting the 4A state championship trophy after 1-0 win over Issaquah on Saturday night at Sparks Stadium.

“All you can do is hope for the best and ask your keeper to try to make at least one save. [Keely Wieczorek] made two,” said Camas third-year coach Keri Tomasetti, who served 12 years as Roland Minder’s assistant before ascending to head coach. “So, you can’t ask for more than that. But it’s extremely nerve-wracking [in shootouts].”

On the flip side, first-year Issaquah head coach Jason Lichtenberger was feeling good inside about his team’s defense and holding a powerful offensive team like Camas scoreless for 80 minutes of regulation and two five-minute overtime sessions.

But then Lichtenberger took one look around and saw the pain and agony of his players for coming so close, yet not bringing home the top trophy.

“We’ve got a tremendous back line [of defense] that I can’t speak highly enough about,” Lichtenberger said after his team fell 4-2 in the shootout. “Three of my captains are back there and a junior starter for the last three years in Ruby May. We have a lot of confidence in the back line. I was confident we could weather the storm.”

Instead, it was take your chances with a coin flip called shootout.

“That’s never a fun way to lose,” Lichtenberger said. “We went to one in the quarters and made it through. You know those are 50-50 chances at that point, so we were on the wrong side of it. My girls battled so hard. Camas is a fantastic program that we have a lot of respect for and we knew it was going to be a battle and it was.

“Both teams played great. I thought we had a good run of play in the first half and then in the second half, they came out brought it to us and we weathered it.”

The Papermakers (22-0-0) capped a perfect season and probably couldn’t cracked the Issaquah (13-4-1) in the second half with any kind break or some luck. Camas fired 17 shots off to the Eagles’ three after intermission, but couldn’t find the goal until shootout.

Ultimately, Camas collected its third state title in the sport, but not without fretting.

“All season long I’ve been telling them they’ve been giving me more and more gray hairs, because they like to leave it to the last second to solidify it all,” Tomasetti said. “I guess this was just icing on the cake.”

Wieczorek welcomed the pressure of needing to step up in shootout.

“I love the pressure,” said Wieczorek, who hadn’t been part of shootout for two-plus seasons. “This team thrives under pressure. We have so much grit and we’ve shown that throughout the season. Tonight just came down to that grit and we had more of it.”

Wieczorek’s two stops in the third and fourth rounds left Camas on top 3-2 in the shootout and Melcher closed by slotting the ball into the lower right corner of the net away from Issaquah sophomore goalkeeper Ava Bruns.

Wieczorek didn’t shy away from a big moment and it likely led to turning away penalty-kick shots by Jensyn Lins and May in shootout.

“You have to come in with confidence,” she said. “It’s all about the confidence and the mindset going into that. We deserve that championship and we earned it, all season long.”

One other time the two teams had met in a state final and Camas prevailed there 2-0 in 2005 in the 3A title match.

During the regular season, the Papermakers don’t face the prospect of being in a shootout with the Greater St. Helen’s League (GSHL) not using those as part of their competitive format.

“We practice them, but it’s not the same in the Final Four as having them in [other] games,” Tomasetti said. “It’s so different. It’s just that whole different set of feelings and nerves. It’s a bigger arena and this is state and this is a big deal. So, you can never prepare.”