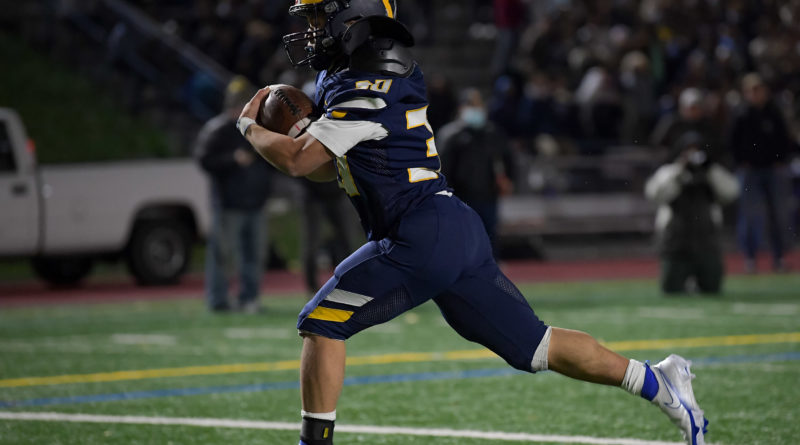 The last time the Bellevue High School football team reached the Class 3A state quarterfinals, the sting of defeat lasted two long years and through a pandemic.

Those sophomores who felt that pain two seasons ago are now seniors. When opportunity knocked this time, the answer was emphatic.

Led by senior running back William Wang as the wrecking ball of destruction in Bellevue’s vaunted Wing-T rushing attack, the Wolverines dogged Rainier Beach all night on the ground in a 56-22 triumph on Friday night in Class 3A state quarterfinals at Bellevue High School.

The 5-foot-10, 185-pound Wang powered his way to 197 yards rushing and a career-best five touchdowns on 32 carries to push Bellevue back in the state semifinals for the first time since 2018.

“It was just back to the grind,” said Wang, referencing how his team felt after suffering a 50-21 season-ending defeat to Eastside Catholic in 2019 in the state quarterfinals. “The week after that loss, we went straight back into [lifting] weights and we’ve been working ever since and often, even during COVID we tried to safely to get together to do team weights.”

Wang more than carried his weight on Friday, and now Bellevue (12-0) meets the winner of Saturday’s Marysville-Pilchuck (10-1)-Yelm (10-0) quarterfinal contest on Saturday, Nov. 27 in the 3A state semifinals. The 2020 season was pushed into spring of 2021 and the 2020 postseason was eliminated by COVID.

“These seniors all remember that [Eastside Catholic loss],” said Bellevue coach Michael Kneip, now in his fourth season leading the program following sanctions from Washington Interscholastic Activities Association (WIAA) that stripped the program of two state titles. “These seniors were all starting as sophomores. They remember that feeling pretty well. It’s just been about trusting the process. Tomorrow, it starts all over again and it’s zero-zero. We’re just trying to get better and healthier.

“The goal is to play our best football. You know it’s not to win a state championship. It’s to be the best version of ourselves and hopefully it all works out.”

Bellevue is two wins away from its last counting state title in 2011. With its decision in 2016, the WIAA scrubbed two of the Wolverines’ 12 overall titles from 2012 and 2013 for recruiting and rules violations during that time.

“This is a special moment for these seniors,” Kneip said. “They have played together for a long time. They are just enjoying the whole thing.”

The first meeting of the two schools in the state playoffs ended with Bellevue rolling up 431 yards of total offense, all of which came via rushing. It was just a grinding display of a ground game and the Wolverines had an answer every time Rainier Beach (6-4) threatened to make a game out of it.

Beach closed within 28-15 by opening the second half with a 13-play, 80-yard scoring drive that took 5 minutes, 2 seconds off the clock and was capped by Scott’Tre Humphrey’s 2-yard TD run and two-point conversion run.

But a 1 minute, 20 seconds later, junior running back Ishaan Daniels jetted 62 yards up the middle for a touchdown and 35-15 cushion. Wang added TD bursts of 9 and 47 yards and just before the end of the third quarter Bellevue was in control 49-22.

Here are four observations from the Rainier Beach-Bellevue game:

NO CREDIT NEEDED FOR WANG

Bellevue’s lead back, Wang, in his low-key fashion deflects credit and praise much like he deflects would-be tacklers.

But he doesn’t mind whatever workload is needed to win.

“I’ll carry it as much as I need to so I can help our team win,” Wang said after his workhorse night. “I had two fumbles this game, so I still feel like I have stuff to work on. I want to do everything I can to help my team win.”

When asked if he’d ever had a five-touchdown game, he shrugged and simply replied, “No.”

“He’s not a big stat guy,” said Kneip. “He probably could be leading the state in rushing. He’s so selfless that he wants other guys [like reserve running back Carson] Rubin in at the end of the games. He’s a great teammate.”

Rubin capped the scoring with a 14-yard TD run with 2:52 remaining in the game.

AFTER FOUR TITLES AS A PLAYER, KNEIP WOULD RELISH COACHING TITLE

After winning four 3A state titles on the field as an offensive lineman, Michael Kneip would like nothing more than to help his current players bring home a state title.

The 27-year-old Kneip took over the program in 2018 – two seasons after the school’s sanctions — after playing at the University of Washington and graduating from there in 2016.

Kneip thanked all his seniors individually on the field as they met after Friday’s victory, telling him loved them all.

“These seniors mean so much to me,” Kneip said. “Coming in at [age] 24 like I did and trust me and trust the coaching was amazing. These guys are all family to me. They are all little brothers to me.

“It would mean way more to me as a coach [to win a state title]. You know there’s 55 guys that I see as family. As a coach, it would mean everything. And, I know what a state championship did for me and the confidence that gave me.”

BEACH BATTLE IN SECOND HALF THROUGH AIR

Rainier Beach couldn’t match the ground-and-pound and deceptive Wing-T rushing attack of Bellevue, but their offense nearly got them back in the game in the second half.

After completing 6 of 9 passes for 48 yards with two interceptions in the first half, Vikings’ quarterback Chance Guadiz bounced back to finish with 23-of-35 accuracy, 259 yards passing and one TD.

Ellis Branca caught 10 passes from Guadiz for 114 yards, hauling in a 72-yard catch-and-run TD late in the fourth quarter to cut the Bellevue lead to 42-22.

The misdirection of Bellevue’s Wing-T offense and the precision blocking had the look of some of the program’s state-championship teams of old. The Wolverines were overpowering and relentless in piling up 431 yards on the ground

When the question “Is Bellevue football back?” was posed to Wang, he simply nodded and smiled.