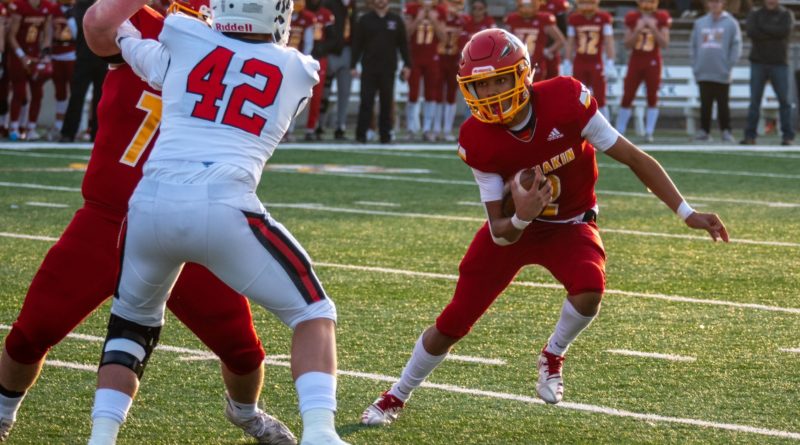 KENNEWICK – Payton Graham set the tone for his big night on the opening kickoff and Kamiakin pulled away in the second half for 35-14 victory over the Camas Papermakers in a 4A state quarterfinal game Saturday afternoon at Lampson Stadium.

The fourth-seeded Braves (11-0) advance to play top-seeded Graham-Kapowsin, which beat Bothell 41-25 in its quarterfinal game Friday night. Camas finishes the season with a 7-4 record.

“That is a good football team,” Kamiakin coach Scott Biglin said of the 2019 state champion Papermakers. “This is a good win and now we get to disrupt some Thanksgiving plans.”

Kamiakin raced out to a 7-0 lead, scoring on its first drive of the game after opening kickoff return by Graham to the Papermakers 16-yard line. The Braves needed just four plays to take a quick lead.

Graham did a little bit of everything for the Braves: a big opening kickoff return, two rushing touchdowns, a receiving touchdown. The senior even completed a 32-yard pass to Gabe Tahir on the Braves final touchdown drive of the game. Oh, by the way, he kicked five extra points.

Kamiakin extended the lead to 14-0 later in the first quarter before Camas started to settle in on offense.

Taylor Ioane connected with Connor Murphy on a 26-yard touchdown play with 10:08 remaining the first half to cut the lead to 14-7. Camas tied the game two possessions later when Jon Schultz burst through the middle on a 32-yard run.

“It’s really hard to faze these guys,” said Camas coach Jack Hathaway said. “We are a heavy run team and think we can run on any one and we did that in the second quarter.”

Schultz had 11 carries for 66 yards in the first half.

But after the Papermakers second touchdown, Camas did not find the endzone again. Kamiakin bottled up the run and reeled off the final 21 points of the game. Camas did not threaten to score against the Braves staunch defense in the second half, continually stuffing the Papermakers offense and forcing third-and-long situations.

“That’s a good football team and we made some mistakes,” Hathaway said. “I’m proud of our guys. We just didn’t play our best game.”

Kamiakin, who won the Mid-Columbia Conference, took the lead for good on a 4-yard touchdown run by quarterback Henry Mercado with 1:20 left in the second quarter. After a scoreless third quarter, the Braves extended the lead to 28-14 early in the fourth quarter on a 2-yard run by Graham off a direct snap.

“We all knew this was our last home game of the year and we had to make it count,” Mercado said.

Mercado passed for one touchdown and ran for another.