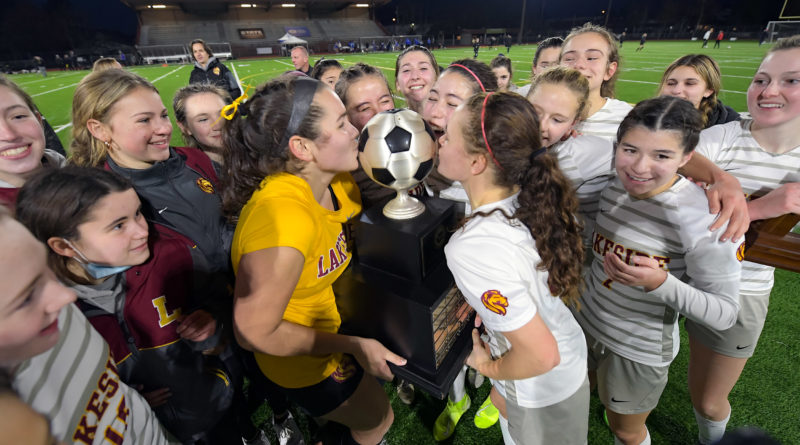 PUYALLUP — Cate Lewison heard the stories for years at home. At family gatherings.

The rivalry between Lakeside and Seattle Prep girls soccer was already embedded in Lewison from a young age. Then, when the youngest Lewison enrolled at Lakeside, the dividing line was stronger than ever.

Lewison clearly respected her opponent, but never was it more fun to help plunge a couple of daggers in the closest rival as the senior forward scored a goal and help set up another as Lakeside closed out Seattle Prep 2-1 on Saturday in the Class 3A state championship game at Sparks Stadium.

Lewison’s creativity and push up front allowed the Lions (19-1-2) to reel in the school’s sixth state title in the sport and its first since 2003. As much as anything, there was a proud family beaming in the stands.

“Prep’s our biggest rival and have been for 20 years,” said Lewison. “My aunt [Elizabeth] and mom [Melinda] played against them when they were at Lakeside and played against them, so that kind of amplified our drive to win. Knowing our opponent, that gave us an advantage and we knew what to expect.

“It was exciting. It was a good fight.”

Solid defense from the 51st minute on allowed Lakeside to nurse home a 2-1 lead and to come up with a title that had a historical ring to it. The matchup was the first All-Metro League showdown in the 37-year run of the 3A state tournament.

“It’s been great to compete against such awesome competition all year,” said Lewison, noting that teams from the Metro League Mountain Division finished 1-2-3 at 3A state this season with Holy Names taking third place.

A frantic last couple of minutes put a scare into the Lions late, but they thwarted a pair decent scoring chances on corner kicks in the final minute of the match.

“At the end of the match, it wasn’t so much the score, but it was managing the chaos,” Lakeside coach Derrek Falor said of an anxious late stretch of defending. “We’re not necessarily a lockdown defensive team. So managing the chaos in our box was really more the thing. I just hoped we’d be the first to the ball and hope to heck [USC-bound goalkeeper] Hannah Dickinson catches it. Because that was really our best defense, having Hannah catching those crosses.”

Lewison’s second-effort play in the 35th minute put Lakeside ahead 1-0 after a scramble in front of the Seattle Prep goalmouth. After a shot by teammate Stella Simchuk bounced around and off the hand of Panthers’ goalkeeper Elsa Kammereck and near the end line, Lewison took a couple pokes at the ball, the last of which pushed into the net.

The Lions’ lead grew to 2-0 after a cross from Lewison landed at the feet of teammate Halle Fenkner, who converted a 9-yard second shot after her first bounced off Kammereck and back to her in the 46th minute.

Prep now has five state runner-up finishes to go with its three state crowns. The Panthers also were adding to their lore with an eighth state finals appearance from 25 state trips.

“Prep has just been a behemoth for a great many years,” said Falor, whose program has reached 10 state finals now in 26 state berths. “I’m proud of our kids for not playing the name on the shirt opposite us, but really just playing.”

Lewison’s growth on the soccer pitch in four high-school seasons was a big reason Lakeside hoisted the trophy in the end.

“It’s funny, as a freshman, she was just an athlete and not a very good soccer player,” Falor said. “And, now she’s become an amazing leader and an amazing 1 v. 1 player. She obviously leads by example.”