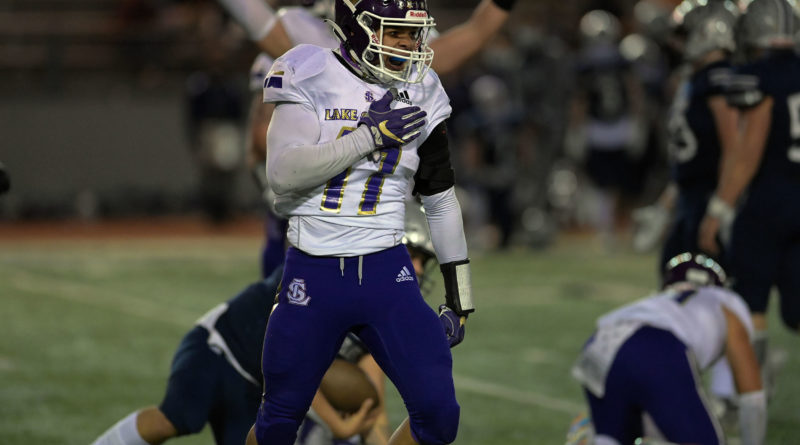 LAKE STEVENS – it was a blockbuster playoff matchup better-served down the road – but that’s not how the WIAA bracket broke for second-ranked Lake Stevens and No. 3 Gonzaga Prep, both league champions.

Unfortunately, the two Class 4A powerhouses had to meet in the state quarterfinals Saturday.

Somebody had to win. And the other was going home.

The Vikings made sure they were moving on.

For the second time in three seasons, the Vikings move on to the 4A semifinals. They will take on other league champion – 4A KingCo winner Eastlake – next weekend at a site yet to be determined.

“It’s pretty cool, for sure,” Lake Stevens coach Tom Tri said. “We want to go win it all. But the final four is pretty special.”

Here are four observations from the Lake Stevens-Gonzaga Prep game:

Back in the early days of the Tri era, the Vikings ran a 4-3 defense – until it was shredded for more than 500 rushing yards by Newport of Bellevue’s wishbone attack in a 62-35 district-round loss.

So, the next season, the Vikings primarily ran a 4-2-5 to stop power rushing offenses like Newport – and the opponent Saturday in Gonzaga Prep, which terrorizes defenses with its triple-option attack.

It took a quarter-and-a-half for the Vikings to settle in. Gonzaga Prep drove 90 yards on 17 plays for its first touchdown – a Ryan McKenna 10-yard quarterback keeper on the first play of the second quarter to tie the game at 7-7.

Ninety seconds later, the visitors were back at it again. They went 80 yards on 14 plays, capping it with another McKenna touchdown on fourth-and-goal from the Vikings’ 2, to take a 14-7 lead.

But over the final 28 minutes, Gonzaga Prep was largely held in check – 53 yards on 24 plays.

“In all honesty, we were more in a 5-2 tonight,” Tri said. “We put an extra lineman on the field just to stop their inside run game.”

The entire first half was back and forth as the Vikings pulled even – 14-14 – on the first of Limar’s four touchdown runs, a 12-yarder with 4:16 remaining in the first half.

On its ensuring drive, Gonzaga Prep ran three plays – and faced a fourth and 1 from its own 41-yard line.

Being on the road – having his son, the two-time GSL player of the year, under center – Bullpups coach Dave McKenna rolled the dice and left his offense on the field.

And Ryan McKenna never had a chance on the fourth-down run to the left as the Vikings’ entire defensive line – Ashten Hendrickson, Dylan Slezak, Curtis Vilicana and Naveer Kaile – crashed on top of the Gonzaga Prep standout for a 1-yard loss.

“I just got greedy – and stupid,” Dave McKenna said.

Two plays later, Limar strolled in with a 7-yard touchdown run – and the Vikings never looked back with a 21-14 lead with 1:50 remaining before halftime.

Even before the playoffs began, the Lake Stevens coaching staff had discussed about adding a wrinkle to its offense – getting Limar in a direct-snap (“Wildcat”) formation.

That plan went into full motion after quarterback Grayson Murren suffered a serious leg injury in the team’s win over Kamiak – and with its 4A Wesco showdown against Glacier Peak looming the next week.

The results? It fits Limar like hand in a glove.

“I picked it up within two days at practice,” Limar said. “It wasn’t too difficult.”

On Saturday, with the pressure the Bullpups were creating on the edge, Tri went to Limar in a direct-snap look midway through the second quarter. His first snap was a 16-yard run, and the offense suddenly had a little extra giddy-up.

“Most teams snap to the quarterback and hand it off,” Tri said. “Ours is a direct snap, and it hits really quick. It is tough to simulate those kinds of fast plays in practice.

“That is one thing we’ve worked really hard on – making sure we are catching that (snap) and we are getting vertical right now.”

After the game, Dave McKenna was complimentary of the entire Lake Stevens operation, adding the Vikings are legitimate state contenders.

“Having No. 12 (Murren) back sure helps them,” McKenna said.

In his first start since suffering a leg fracture, Murren completed 14 of 21 passes for 201 yards. He did not throw a touchdown pass, but he did not commit a turnover, either. And the offense racked up 442 total yards on 60 plays, compared to the Bullpups’ 233 yards on 60 plays.

Just being back gave the offense a lift, wide receiver Trayce Hanks said.

“It was a terrible time when it happened, and I was sad,” Murren said. “But coming back now, the team is all happy. And I am good.

“I didn’t know if I was going to come back. I just trusted the doctors, prayed a lot and I got back on the field.”