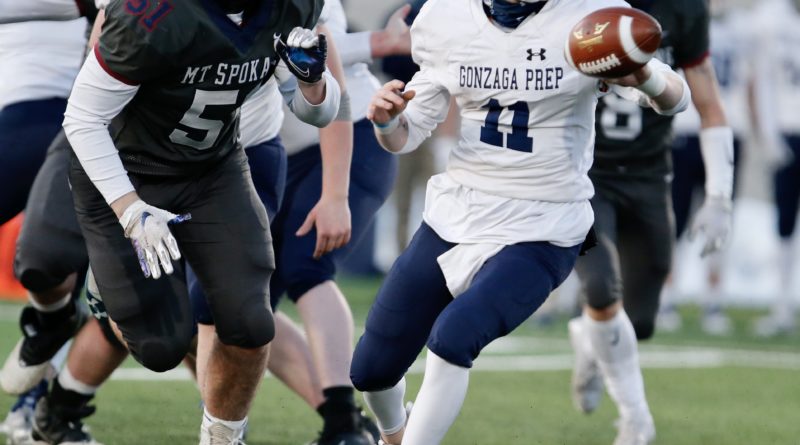 In the Class 4A playoffs, why do teams always emit a collective groan when they draw Gonzaga Prep in the bracket?

It’s because the Bullpups run an offense that no large-classification state contender dares to – the triple option.

And if Greater Spokane League defenses struggle to stop it facing it annually, imagine the squeamishness it causes for others around the state that have a few short days to prepare for it?

“Knowing it is so difficult to defend and prepare for, it is a huge advantage for us,” Gonzaga Prep coach Dave McKenna said.

That style offense was brought on board by wishbone proponent Don Anderson, the hall-of-fame coach who captured 15 GSL titles in his 23 seasons at Gonzaga Prep while also guiding the school to a pair of 4A titles (back then, called the “King Bowl”) in 1982 and 1986. McKenna was part of those teams as an option quarterback.

When McKenna took over the head job from Dave Carson, he gave the reins of the offense to Bob Cassano, who is generally regarded around Spokane as the triple-option guru.

And one of the reason McKenna appreciates the triple option so much is that it requires a ton of teamwork to operate masterfully – and doesn’t favor one player.

“This week, it might be the quarterback who has a big game,” McKenna said. “Next week, it could be a slot back or wing back. Who knows? We’ll stick with it.”

These days, it’s safe to assume the quarterback – senior Ryan McKenna, Dave’s son – will have a big showing every week under center for the Bullpups. He is the two-time league player of the year, accumulating nearly 1,800 yards of total offense and 27 touchdowns in games he barely plays more than a half in.

“Like I said, it is an unselfish offense,” said Dave McKenna, who led the Bullpups to the 4A title in 2015. “Our wide receivers are extremely talented and very good athletes, but they rarely will see the ball. But they buy into what we do, so it is extremely team-oriented.”

A closer look at the WIAA 4A state quarterfinals: SBLive Washington podcast

What to watch for: This early? Seems almost unfair that these two reigning league champions – and 4A powerhouses with a proven track record – were set up this early in the state bracket. These teams’ contrasting styles are what this as intriguing a matchup as there is around the state, in any classification. Bullpups QB Ryan McKenna will continue to try and find leaks in the middle of the Lake Stevens’ defense in the triple-option attack – and Vikings QB Grayson Murren, who is a full-go from a leg injury, will constantly test the Gonzaga Prep edge defenders, at all levels. Vikings have a little more talent spread throughout the roster – but the Bullpups know how to win state titles (three, latest one in 2015).

What to watch for: This is a big week for the 4A KingCo champions, who have advanced to the 4A quarterfinals four times in program history – and never made it out of that round. This might be Eastlake’s best shot, but to do so, it will have to find ways to generate offense against the most physical defensive front it has seen all season. That is where QB Parker Barrysmith comes in. The first-year starter has had big passing efforts in the second half of the season, and likely will have downfield opportunities for big connections. Without RB Peyton Wing (knee), the 4A SPSL spring MVP, Sumner has tried to mix and match backfield weapons. But it all comes down to how QB Bo Carlson can sustain mistake-free drives, and keep the Wolves’ offense parked on the sideline.

What to watch for: It is never a settling feeling when the defending state champions come to town. And this weekend, Camas and that vaunted defense – the engine driving the team’s current seven-game winning streak – will invade the Tri-Cities. The Papermakers have a tall task ahead as QB Henry Mercado, the Mid-Columbia Conference’s player of the year, and that passing offense has steamrolled all oncomers for high-output performances. The Braves have four wide receivers, led by do-everything ATH Payton Graham, who are savvy in setting up defenders. But this Camas defense believes it can slow down anybody – and has – and will feed RB Jon Schultz early and often to control the football and shorten the game.

What to watch for: With the 4A SPSL champions now on a classification-best 16-game winning streak, guess the last team to send them packing with a loss? Yep, it was a “Blue Train” special – a 30-27 Bothell victory on this same field in the 2019 state quarterfinals. And right now, the Cougars are brimming with a ton of confidence after their come-from-behind win last week over Glacier Peak, scoring the final 35 points. They also get big-play RB Bryce Kooy back to test the edge of the Graham-Kapowsin defense. But at the end of it all, the biggest concern – on either side – has to be Bothell’s approach in slowing down dual-threat QB Joshua Wood, especially with a set of linebackers that has struggled much of the season containing mobile signal callers.