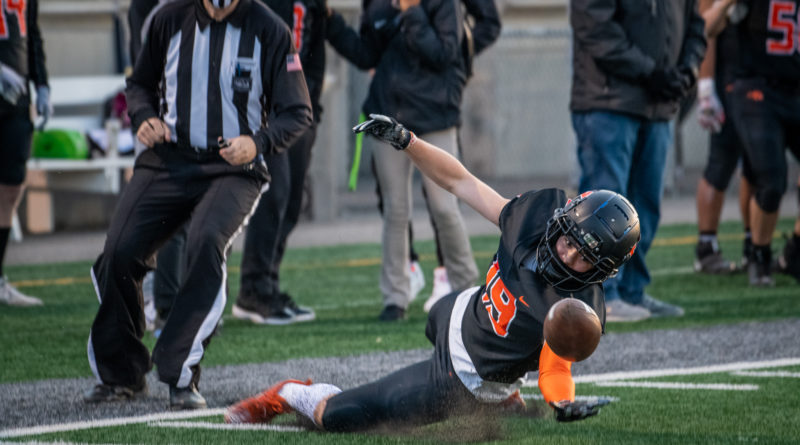 Myles Mayosky can clearly remember the looks on the faces of his linemen after O’Dea blew up a blocking scheme on the Lions’ first rush attempt in the 2019 state semifinals.

Even though Kennewick had gone further in the playoffs than expected — internally and among outsiders — in part by the strength of its offensive line, O’Dea was even bigger. And meaner. From that point forward, Mayovsky remembers his teammates looking — and playing — like they were overmatched. Even a little afraid.

“Our whole offensive line, and these are big dudes,” Mayovsky said, “they’re like ‘man, these guys are big and strong.’ Little me sophomore year was like, ‘guys, come on.’ ”

Two years later, 6-seeded Kennewick is set to drive to Seattle to face O’Dea at 4 p.m. at Memorial Stadium with renewed confidence in the 3A state quarterfinals, having been on this stage as a program two years ago.

“Our trenches are pretty big,” Mayovsky said. “They’re huge, strong and they’ve just grown so much.

“We have the (humility) and the courage to go out there and beat ‘em this year.”

But he remembers how physical the Fighting Irish played and knows the Lions, no matter how big or small, still need to match it. O’Dea won 28-7 that late November evening in 2019 and the Lions were sent home packing.

Lately, the Lions (10-1) have benefitted from subtle defensive adjustments. Mayovsky moved from outside linebacker to middle linebacker, alongside Bronson Childs, who transferred back to Kennewick from North Mason (Idaho). Childs is a 6-5, 230-pound Division I FCS prospect whose dad, Ron Childs, played in the NFL.

“It changes our whole defense and our offense, since he lead blocks for me,” Mayovsky said. “He just goes out there and kills people. Dude, he’s so good.”

Ayden Knapik, a 6-7 tackle who holds an Eastern Washington offer, is thriving in newfound position at left tackle. He was a tight end last year, until Affholter and Mayovsky pulled him aside and asked him to move over, citing his upside and college potential playing on the line.

Returning all-league wide receiver and defensive back Simeon Howard re-entered to the lineup for the first time midseason, giving the Lions another dynamic playmaker out wide and bolstering a facet of the game — passing — O’Dea hasn’t really shown.

And after a string of grind-it-out victories, including a come-from-behind first round win over 11-seed Spanaway Lake, the Lions are relishing another shot at the team that ended their title hopes in the last time the state playoffs were held.

“This is what we want,” Mayovsky said. “Lose to them my sophomore year, now we’ve got to beat ‘em.”

A closer look at the WIAA 3A state quarterfinals: SBLive Washington podcast

What to watch for: The rematch of the 2019 state semifinals, which O’Dea won 29-7 before finishing state runners up, could be decided by who owns time of possession. Kennewick feels more confident going toe-to-toe with the perennial state powerhouse. “We’re loaded and we’re ready to go get them,” said Lions RB/LB senior, who played in the 2019 game. After a close win over 12-seed Garfield in Week 9, O’Dea has scored big and won handily behind a rush-heavy attack led by sophomore phenom Jason Brown Jr. (1,629 rushing yards). If it needs, tight end Tucker Ashcraft can stretch out a defense as a reliable target in play action. O’Dea should hold a size advantage, but the Lions — led by 6-7, 250-pound lineman Ayden Knapik— are the biggest team it’s faced in weeks. Can Kennewick match O’Dea’s physicality in the trenches? “You’ve got to match that intensity and you’ve got to have that mindset when you play them,” Lions coach Randy Affholter said. Lions QB Dayton Davis, who left the first round win with an AC joint sprain (shoulder), is day-to-day, per Affholter.

Nugget: Affholter and longtime O’Dea coach Monte Kohler first crossed paths more than 30 years ago when Affholter was recruiting the Seattle area as an assistant coach at Walla Walla Community College. They played twice when Affholter was the coach at Toppenish in the 1990s.

What to watch for: Coming off of a road win at 7-seed Arlington in the first round, the Wildcats and their “bend, don’t break” defense must travel back across the state and face the most suffocating defense it’s seen all year. Over the last three games, the Crusaders have held their last three opponents to less than a yard per carry, 76.3 yards of offense a 13 percent third down conversion rate and have forced nine turnovers. Mount Spokane QB Kellen Flanigan surpassed 2,000 passing yards on the season last week and has plenty of options out wide. A healthy blend of Aiden Prado, shifty Blake Speer and wideout Jordan Sands could be the key to jump-starting its offense — so long as they hold onto the football.

What to watch for: Marysville-Pilchuck doesn’t make you guess. It’s going to run the ball, and do it often. Head coach Brandon Carson’s slot-T netted a season-high 549 yards against Garfield in the first round, pushing three-year standout fullback Dylan Carson above the 2,000-yard mark and Jordan Velasquez above 1,000. Yelm’s athleticism on D should make up for the size disadvantage, but they key to success is discipline — Tornados coaches have emphasized staying “gap sound” all week. The question remains: can Pilchuck’s even front defense slow Kyler Ronquillo, Brayden Platt and Yelm’s deep arsenal of playmakers? The big news of the week is Platt, a four-star running back/linebacker, will play after Yelm won a WIAA appeal challenging his first round ejection for a purported late hit.

What to watch for: Rainier Beach has the size and athleticism to slow Bellevue’s patented old-school machine-like wing-T, but can it stay disciplined for four quarters? Lakes showed it’s possible to put points on the board on Bellevue when it carried a 21-21 tie into the second half of the Wolverine’s first round win. Ishaan Daniels’ speed around the edge is the ultimate game-breaker for a team that can roll out an assortment of backs on any given down — namely its two 1,000-plus-yard rushers in William Wang and Blake Teets. Beach’s speed and athleticism provide matchup advantages in its spread offense, which has been unlocked by QB Chance Guadiz’s ability to get the ball to wideouts Jaelin Green, Caleb Presley and Nahmier Robinson.