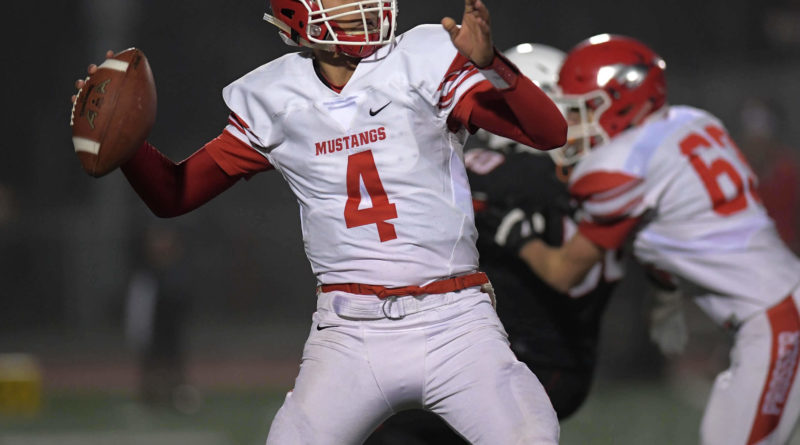 Corey Ingvalson knows people around the state are acclimated to seeing something different from Prosser football.

But this fall, the coach and his Mustangs – largely breaking in a new cast of starters – have played a fair share of nail-biters.

In six of their nine games, they trailed at one point. Four of them were one-score games in the fourth quarter.

Prosser won two games in double overtime – 26-20 over Ellensburg and 32-26 over Selah. And the Mustangs clinched the 2A CWAC title (and 33rd in school history) by marching 98 yards in the final three minutes, capped by Kaiden Rivera’s 25-yard touchdown pass to Chris Veloz with 39 seconds to go, in a 28-21 victory over Ephrata.

“We’ve had all of that happen in one season, which has been unique,” Ingvalson said. “And we’ve built a belief you find a way to get it done, somehow and in some way.”

Even though Ingvalson had to replace 16 of 22 starters, the most important returning piece was Rivera, a third-year starter in the Mustangs’ Air Raid attack.

“That is where our belief comes from,” Ingvalson said. “He truly believes if you gave him one minute to go 98 yards, he will do it.

“His belief is the engine of the team.”

Ingvalson said those close games should serve Prosser well moving forward as it travels to Lynden for a 2A quarterfinal game Saturday.

“Honestly, even in 2015 when we won it all, we had setbacks,” Ingvalson said. “You have to get grimy in the playoffs … and you have to have those responses.”

What to watch for: Teams last met in 2019 – a 57-7 Sentinels’ victory when they were on their way playing in the state championship game. Now it is North Kitsap’s turn to play the favorite role, and the biggest question entering the game – how much closer is QB Colton Bower (ankle) to full health. The team has certainly been managing his workload – he was out before the fourth quarter in the first-round victory over Shadle Park. And against a bigger, more aggressive Steilacoom defensive front, led by DT Sam Stowers, Bower will not only need to be mobile in the pocket, but nimble as a runner. The Sentinels have their own quarterback-related issues, but RB Deandre Napier is a capable workhorse, especially with backfield mate Jaycion Cain (ankle) hobbled.

What to watch for: For as often as these two perennial state contenders are in the postseason, it is odd that the last time they played each other was 13 years ago – in a wild 35-34 double-overtime Lynden victory for the 2A title. And by Lynden coach Blake VanDalen’s estimation, that is the last time the Lions have faced an Air Raid offense. The Mustangs will go fast – and throw often with QB Kaiden Rivera, the third-year starter who has led a slew of close, come-from-behind victories this fall. But this is one of the Lions’ best defensive backfields in a decade, led by CBs Kole Antypas and Ryan Kleindel (two INTs), and S Kobe Baar and Collin Anker (team-high five pass breakups).

What to watch for: This very well could be the weekend’s most intriguing chess match between two closely-paired seeds. And the best single-player matchup could be on the outside – Ridgefield’s big-play WR Ty Snider versus Squalicum shutdown CB Kai Posey, who will likely shadow the receiver much of the game. Posey’s presence allows the Storm defense to bring blitzing pressure, led by LBs Djouvensky Schlenbaker and Bryson Lamb. Ridgefield’s interior six defenders, paced by LB Wyatt Bartroff, are unyielding and bring the hammer to opposing rushing attacks. But Schlenbaker, a WSU commit, is no ordinary running back. Squalicum will try and get him and QB Leyton Smithson on misdirection plays, hoping to attack the perimeter.

What to watch for: Yes, this is a rematch from an opening-weekend game – a 56-6 Thunderbirds’ victory. But both coaches admit, in football-playing age, that happened eons ago. Tumwater has a new trigger man in QB Alex Overbay, who missed early-season action because of a thumb injury. The big-armed junior gives the Wing-T offense a big-play passing element, especially with TE Austin Terry and Ryan Otton in the fold, to make load-the-box defenses pay for that strategy. What is Enumclaw coach Mark Gunderson’s message this week in trying to slay the giant? “It’s hard to beat a team twice in the same year,” he said. And the Hornets should know – they survived a district-round game against 2A SPSL foe Washington just to make the state field.