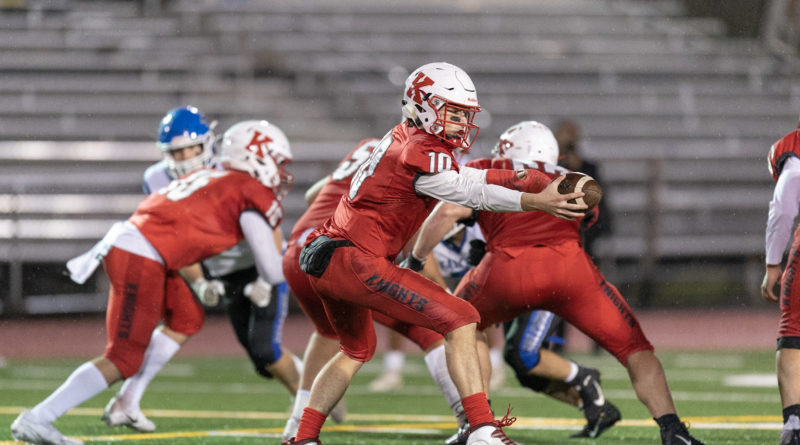 It shouldn’t surprise King’s coach Jim Shapiro that his 5-seeded Knights bear so much resemblance to his last playoff team, which finished 1A state runners up in 2015.

Senior-led. Big up front. Similar strengths and makeup. And they even re-installed the same defense — the 4-3 — for the first time since then, thanks in part to the four players from that group who are now a part of Shapiro’s coaching staff.

“That defensive shift has made a huge difference for us,” Shapiro said.

When King’s (8-1) plays 4-seed Lakeside on Saturday at 1 p.m. at Union Stadium in Mead, it’s bringing a similar identity with it.

“Fierce resilience is really the attitude of the team,” Shapiro said. “Very quiet in their demeanor, very physical in their play. This is a group we’ve been watching since they were in junior high.”

After going 5-2 in the COVID-shortened spring season earlier in the year, there was excitement in the program entering this fall considering how much it returned.

They made quick work of the 1A Emerald Sound Conference this fall, winning easily even when senior quarterback Hayden Teeter missed five weeks with a broken hand.

But they knew just winning in their backyard wouldn’t prepare them for a state playoff run.

Faced with a Week 9 opening and the prospect of having back-to-back byes, Shapiro scheduled Lakewood from the formidable 2A Northwest Conference. The 21-14 loss — its lone defeat of the season — showed the Knights it can handle size in the trenches.

“You really couldn’t ask for more in a game that didn’t matter that much,” Shapiro said.

On Saturday, King’s passed its first test — pulling away to beat Zilah 28-14 in a first round game that was tied in the second quarter.

They must hop on a bus and traverse the state for its quarterfinal matchup against Lakewood, the No. 2 team from the 1A Northeast League. In Shapiro’s 28 years as a head coach, Mead is the farthest he’ll have had to travel for a playoff game.

SBLive Washington podcast: What we learned in the first round

*All stats submitted directly by coaches.

What to watch for: Lately, the Lyncs have produced a glowing defensive report card against rush-heavy teams. The latest test? A team with two 1,000-yard rushers that racked up more than 800 yards on the ground last week, headlined by Oregon State-bound Takari Hickle, who is closing in on 2,000 yards on the season. Lynden Christian can win shootouts, too, with an offense taking form behind run-pass threat Will Colwell and a much-evolved run game thanks to tight end-turned-running back Kade Eldridge, who is coming off a 142-yard, three TD rushing performance.

What to watch for: The Cruisers are big up front — averaging 270 pounds, led by the 6-foot-6, 270-pound Kyle Cox — and have an arsenal of playmakers out wide, as well as a running back approaching 1,000 yards on the season. And they can convert big-play touchdowns in the blink of an eye. Can the Rams and interception-happy Jordan Nortz — who has averaged at least a pick per game — force turnovers against a team that only has nine on the season, and a QB in Wulff with a 20/4 TD/INT ratio? Keeping the ball out of Wulff’s hands is a tall task, but it’s Riverside’s key to staying close.

What to watch for: The Knights send pressure — lots of it — sacking Zillah five times in round one and holding its standout tail back below 100 yards. Now, they must contain elusive dual-threat Kole Hunsaker, the NEA MVP. If his line can withstands six or seven-man pressure, Hunsaker could do damage downfield. Everything King’s does offensively runs through senior QB Hayden Teeter. He’s deceptively quick on his feet, has a host of grizzled options out wide, headlined by 6-3 senior Lucas Prendergast. Teeter isn’t afraid to air out a deep ball to offset short-pass looks. But watch out — Lakeside DB Hiro Patterson is a ball-hawk in the secondary (8 picks).

What to watch for: Toppenish’s storybook season survived a rain-soaked first-round thriller. Its reward? A buzzsaw. The Wildcats face top-ranked Royal, winners of four of the last five 1A state championships, who have averaged 55 points per game and have hardly given up a meaningful touchdown all season. None of this is new to Toppenish, which plays in the other division of the SCAC. Can 1A all-state candidate Jason Grant and Co. spread out the Avery Ellis and Derek Bergeson-led juggernaut Knights defense? “We’re trying to stay within our system,” Wildcats coach Jason Smith said. “We think we can run some of our offense … We’re both undefeated.”