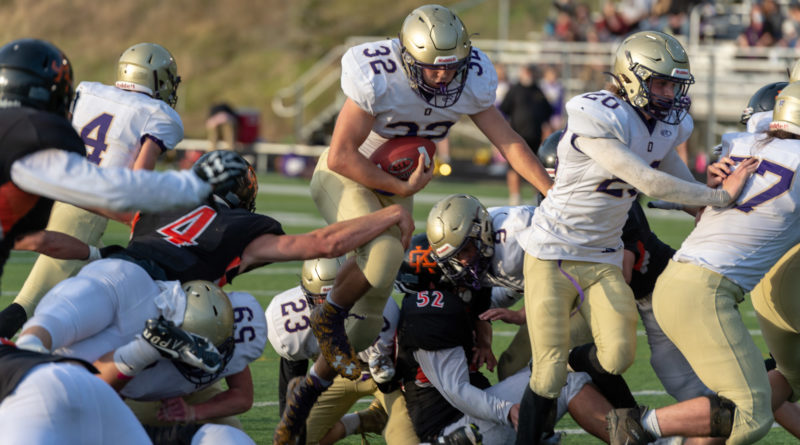 What does it mean to be an Onalaska football player? It means you’re a Logger. It’s not just the school’s mascot; it’s a mentality.

“It’s like cutting a big patch of timber,” said Onalaska coach Mazen Saade, who is in his 11th year with the team. “You have to get the lumber moved. … You have to go to work.”

Onalaska football is as much about pigskin as it is about the small logging town itself. From the physical, triple-option offense the Loggers cut opponents down with to the underdog mentality the coaches preach, Onalaska football is the perfect representation of the community in which in it thrives.

“It’s ingrained in these kids from birth about being gritty and doing what’s right,” Saade says. “It’s about taking your lunch pail to work and getting things done.'”

The 2019 defending state champion champion Loggers (5-5) have to do just that Saturday against fourth-seeded Lind-Ritzville/Sprague (9-0). The teams play at 1 p.m. at Gonzaga Prep in Spokane.

Lind-Ritzville/Sprague, like Onalaska, has a rich football history and a “disciplined, big, fast and strong” team this year, Saade said.

“Their record speaks for itself,” he added. “They’re freaking tough.”

But Onalaska doesn’t mind the challenge; they relish it. The underdog role comes natural.

“They know how to dig, and this year they’ve had to dig,” Saade said of his team. “They put themselves in a place to play in the quarterfinals, and they’re excited about it. It means something to them.”

SBLive Washington podcast: What we learned in the first round

What to watch for: After their first state win since 1985, the Coyotes face the stiffest test east of the mountains. Okanogan is as talented as its 2014 and 2015 state champion teams and hasn’t allowed more than a touchdown in a game since Oct. 1.

What to watch for: A rematch of a Week 8 affair that Napavine won 60-0, Forks has its work cut out for it against a Tigers team seeking its seventh consecutive 2B semifinal appearance.

What to watch for: The defending champions showed the salty record was a byproduct of a tough schedule and not an indicator of the talent level with a 62-8 trouncing of No. 12 River View last week. Now, the plodding Loggers head back over the mountains to face a stout LRS defense (three TDs in past three games).

What to watch for: These teams met in Week 8 when the top-ranked Chinooks won, 36-7. These division rivals are quite familiar with each other, but Kalama has had the advantage in recent memory, particularly with superstar quarterback Jackson Esary pulling the strings.