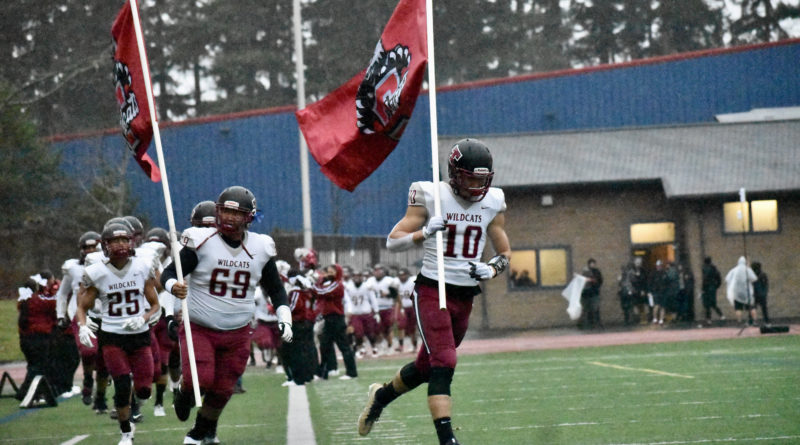 BELLINGHAM, Wash. — Josh Perez sat in the locker room at halftime, disappointed in himself for blowing a coverage assignment, when Toppenish senior Jason Grant calmed his nerves.

“Believe it or not, I told him he was going to get a pick and seal the game for us,” Grant said.

Perez responded: “Yes I am”

Perez picked off a pass to the endzone —a final attempt at the game — with less than a minute left to hold off a furious comeback and seal 26-22 win over 8-seeded Mount Baker (6-4) in the first round of the 1A playoffs in Bellingham’s Civic Stadium.

It’s 9-seed Toppenish’s first state win in 31 years and first state playoff appearance since 1996. The Wildcats advance to the 1A state quarterfinals, where they will hit the road to play 1-seed Royal next week.

The senior quarterback and defensive back completed 17 of 23 passes for 293 yards and tossed three touchdown passes. Two of those went to Shane Rivera, who finished with 96 receiving yards on six catches. The third — and final of the night — went to Grant for 77 yards.

To the Wildcats (11-0), the win was a triumph, layered with a statement to the seeding committee, vindication of preseason expectations and the etching of a new page in school record books.

“This whole week, coach has been saying, ‘stay off social media, stay off what they’re trying to say,’ ” Grant said. “I didn’t listen. I saw everything, and it feels good right now.”

AFTER SLOW START, MOUNT BAKER TOOK MOMENTUM INTO HALFTIME – AND MADE IT A GAME

Timmy Torres’ five-yard run put the game’s opening points on the board late in the first quarter.

Then a pair of 28-yard second quarter touchdown passes from Perez to Rivera gave Toppenish a 20-0 lead. With the Mountainers’ offense sputtering, the Wildcats weren’t far from turning it into a blowout.

Then, Mounties senior QB Davin Beason led a 66-yard drive in 1:16 seconds, capped with a Beason five-yard touchdown run and the ensuing conversion as the first half clock expired, breathing much-needed life into the home team.

“We just said ‘hey guys, we’re fine, we’ve still got some time here,’ ” Mount Baker coach Ron Lepper said. “We just need to make sure we stay ourselves, do our thing, which we did.”

Toppenish felt it needed a big play, so it turned to its 1,000-yard receiver and 1A state player of the year candidate in Grant, who connected with Perez for a 77-yard touchdown pass to reclaim a two-score lead.

But Marcques George — who totaled 111 yards on 12 carries — answered back with a 38-yard touchdown run up the middle to cut deficit to 26-22, early in the fourth quarter.

MOUNTIES HAD A SHOT TO WIN IN FINAL SECONDS

Perez entered the game with a 31/5 touchdown-to-interception ratio and, and didn’t make many mistakes on Saturday.

Until he dropped back to pass on 3rd and 9 with just over three minutes left in the game. The ball slipped out of his hands, and junior linebacker Brady West pounced on the ball, giving the Mounties the ball back on the Toppenish 20-yard line, down four.

Backed up by an errant pitch and a penalty, Beason dropped back on 4th and goal from the 22-yard line for one final prayer, but his endzone heave was snagged by Perez at the goal line and returned past midfield.

Added Lepper: “We had a chance to be able to create some opportunities, but we just weren’t to get all the way there.”

TOPPENISH WANTED A HOME GAME. SO IT BROUGHT ITS COMMUNITY ON THE ROAD

Much of the chatter in Toppenish and in the Yakima Valley this week was spitfire anger centered around the team drawing a 9-seed and a first round road game despite posting a 10-0 record.

Turns out, the city didn’t need a home game to be heard.

Hundreds of Toppenish fans — more than just parents — and the school’s band made the trip out to Bellingham to watch the Wildcats win their first playoff game since 1990.

“It’s great,” Grant said. “It’s been a helluva long time since we’ve been here. But we have such a tight community. Everyone knows everyone, literally. It’s a blessing to be in this community.:

Added Perez: “I just love my people from Toppenish. It’s real support. Real support. Can’t do it without them.”

Toppenish head coach Jason Smith pointed to the spot on Civic Stadium’s field where he watched Western Washington receiver Chris Moore catch what the ESPYS deemed in 1992 the “Greatest Football Catch Ever.”

His parents flew up from Arizona. In total, he had more family in the stands than he could count on both hands.

Smith, a 1989 Mount Baker grad who got his coaching start on Ron Lepper’s staff in the mid 90s, shook hands and embraced his coaching mentor at mid field after the game.

“If it had to not go our way, it’s OK going to another Mount Baker guy,” Lepper said of Smith, who helped Lepper bring the wing-T to his program in 1997.

Smith came prepared. He made sure his players — accustomed to a drier climate — packed extra clothes for the rain. And Smith’s coaching staff dipped footballs in buckets of water during practice all week to simulate the wet forecast.

“It shows our resolve as a program,” Smith said.