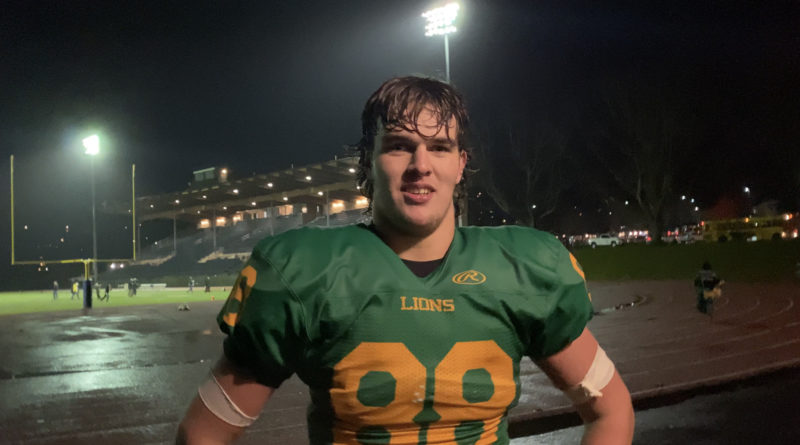 The first, No. 56, he wears when he knows he’s only playing on the offensive and defensive lines. The second, No. 88, is worn on the off-chance he lines up at tight end and slips into Lynden’s pass game.

On a Saturday night when the Lions’ usual stars shined and its defense posted its first shutout of the season, the 6-foot-5, 240-pound senior accomplished a lifelong goal when he checked in wearing No. 88, slipped a block, made he first-ever reception and hauled it 55 yards into a corner endzone puddle for touchdown.

Title contending 2-seeded Lions were already well on its way to its 34-0 first round 2A state playoff win over 15-seed Fife behind a big rushing night from Lane Heeringa at Bellingham’s Civic Stadium. Zweegman’s score, which gave the Lions a four-touchdown lead with 7:40 left, was an added bonus.

The idea to send Zweegman — the team’s sixth rotating offensive lineman — into pass coverage was floated in September. That spawned the new jersey number because of rules preventing linemen from being eligible receivers.

Lynden coach Blake VanDalen told him he’d try his best to get him a catch, but Zweegman was perfectly aware that call might never come.

As he went to line up on Saturday, and saw his coach’s hands start to signal that his number was being called, Zweegman admittedly got nervous.

“I’ve never had a pass attempt, right?” he said. “It scared me a little bit. Then I saw the safety leave and it was just about catching the ball.”

Zweegman has thinned out this season, but still considers his downfield burst “O-lineman speed.” He once he made the catch, he only had one defender to beat down the left sideline.

Said VanDalen: “When that thing opened up I was like ‘oh my god,’ he might get a frickin’ touchdown … that was pretty wide-ass open.”

In practice, players get excited when Zweegman catches the ball. And when he scored, the Lions sideline went haywire.