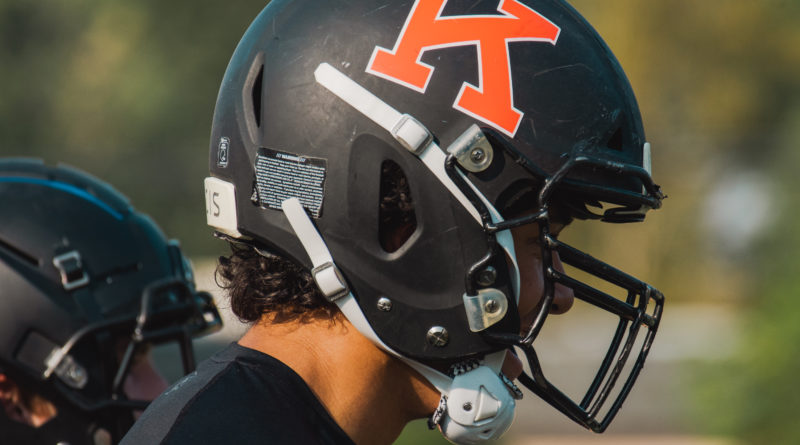 In a 7-on-7 passing game. During the summer. From a game at Park Middle School in Kennewick.

So with 90 seconds remaining in the contest, and Spanaway Lake hanging on to a slim lead, Mayovsky ran a wheel route from out of the backfield, sprinted down the sideline and caught Breedlove’s 30-yard pass for a touchdown – and a 26-21 Class 3A first-round victory over the visiting Sentinels at Lampson Stadium.

The win advances Kennewick to the state quarterfinals, and the Lions will play at O’Dea next weekend at a place and time to be determined.

The Lions found enough scoring to survive and advance using that pass play.

On the game’s first play, Kennewick starting quarterback Dayton Davis faked a handoff to Mayovsky, who then streaked down the left sideline. He had slipped behind the Spanaway Lake linebacker, caught Davis’ pass, and scored on a 58-yard touchdown play for a quick 6-0 lead.

It’s a play that has burned the Sentinels during the season, including in their 3A Pierce County League contests.

“It’s a tough play to have your linebacker turn back and stay with a running back on that route,” Spanaway Lake coach Cameron Robak said. “They have an outstanding running back (in Mayovsky). And it’s hard to keep a linebacker on him.”

But if the Lions thought they were going to run away, they were mistaken.

The Sentinels bounced back to score two unanswered touchdowns, with D’Aryhian Clemons  running in from the 5, and Dempsey James connecting with standout receiver Jasiah Wagoner for a 30-yard scoring strike, and a 14-6 Lake Spanaway lead.

The Lions would go into intermission with a 20-14 lead, thanks to two more Davis touchdown passes — a 17-yard screen play to Erick Mora, and a 10-yard bullet to Austin Stoddard.

But perhaps the biggest play in the first half was the last one.

The Sentinels got a turnover at their own 31 with 1.5 seconds remaining. Rather than take a knee, standout sophomore running back Joshua Collie took a handoff and raced 20 yards before being tackled.

When he got tackled, though, he got hurt. And he never returned to the game.

“When they tackled him, they rolled up on his ankle,” Robak said. “Obviously, we couldn’t run the ball in the second half. (Collie) tried to come back, but a running back needs good ankles.”

Deep into the third quarter, though, it was still a one-score game.

Affholter said he and his staff —after watching game film of the Sentinels — were concerned about Spanaway Lake’s big-play ability.

“Their offense is explosive. You’ve got to stop them from breaking big plays,” said Affholter. “And we really only gave up one play in the second half.”

But it was a big play when James hit Wagoner on a quick slant pattern. Two Lions defenders closed in quickly, but Wagoner split the pair and was gone for a 91-yard scoring play — and a 21-20 lead — with 2:54 to go in the third quarter.

From there, the Lions struggled offensively, with the next four Kennewick offensive series going punt, punt, punt and an interception.

But Affholter and his staff made a change on what would be the team’s final possession.

Davis had been playing hurt much of the game after getting sacked, and the Sentinels’ defensive line had been putting relentless pressure on him in the second half.

Breedlove got the call to come in at quarterback. And that’s when Mayovsky approached the signal caller about a 7-on-7 play the two ran years ago.

“Myles told me, ‘Look at me, then look away, then look back at me and throw,'” Breedlove said. “The game was on the line.”