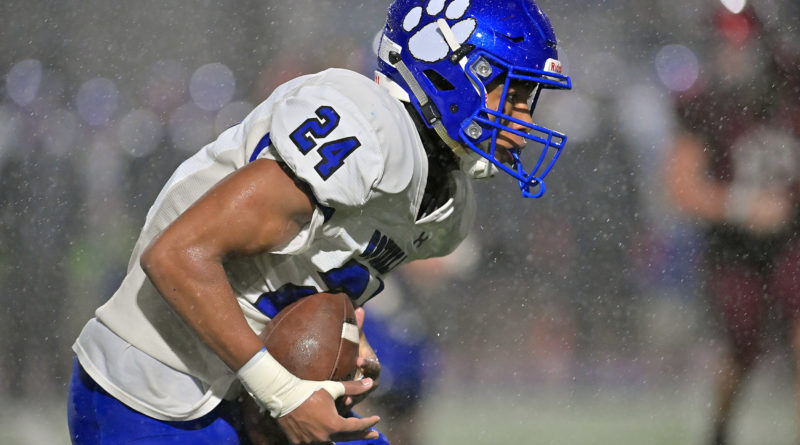 SNOHOMISH – Since moving from Hawaii in late July for his senior season, Logan Lacio immersed himself in the traditions and expectations of the Bothell High School football program.

Now, the transplant from Damien High School in Honolulu, Hawaii, might have played his way into Bothell lore by guiding the Cougars to one of the school’s biggest comebacks in the state playoffs.

After Bothell fell behind by three touchdowns to host Glacier Peak in Friday’s first round of the Class 4A state playoffs, Lacio went above and beyond. Lacio turned in a game of the ages with five touchdown passes and one rushing TD as Bothell stayed alive with a wild 49-35 victory over the Grizzlies, whipping the many “Blue Train” fans who traveled to Veterans Memorial Stadium into a frenzy afterward.

“As hard as it was to lose the KingCo championship, we had greater goals in mind.”

Lacio’s first real test as the Cougars’ leader came on Oct. 28 in the 4A KingCo championship game against Eastlake and it ended in a 21-3 loss and letdown.

Bothell (10-1), the No. 9 seed in 4A state, pulled off the improbable to send No. 8 seed Glacier Peak (7-3) home for the season. That means the Cougars continue on in the 4A state quarterfinals against No. 1 seed Graham Kapowsin (11-0), the 4A state favorites all season and winners of 16 consecutive games.

“And my defense didn’t allow a single point after the first drive of the second half.”

Bothell was the last team to knock off Graham Kapowsin, beating the Eagles 30-27 on Nov. 23, 2019. It took 35 unanswered points to get there against Glacier Peak.

Here are four observations from the Bothell-Glacier Peak game:

ONE PLAY TURNED THE GAME

After Glacier Peak running back Trey Leckner scored on a 39-yard run with 8:54 left in the third quarter, the Grizzlies’ lead grew to 35-14 and Bothell looked lifeless.

But the Cougars scored quickly on a 31-yard pass from Lacio to Marcus Heffernan to cut the gap to 35-21, and then minutes later came the opportunity that was needed.

Sam McAfee stepped back to punt for Glacier Peak, and the snap went low – so low McAfee was forced to go to his knees to gathered the ball in and when he did, referees ruled him down. That gave Bothell the ball at the Grizzlies’ 5-yard line.

“That was a huge play,” Bothell coach Tom Bainter said.

Then, three plays later Lacio fired a 4-yard touchdown pass to Lance Heaton, and suddenly, with 3:55 to go in the third quarter, the Cougars were down, 35-28, and full of life.

“We got beat in all three phases,” Glacier Peak coach Shane Keck said of the second-half swing. “We threw two picks, we had a fumble and we took a knee on a punt and gave them a short field [in the second half]. It was all of us. Unfortunately, that’s the way it went, and I feel terribly for these seniors.”

For the longest time, it looked by Glacier Peak was going to ride its junior running back Trey Leckner to victory.

After he scored his fourth touchdown of the night, the Grizzlies lead 35-14 early in the third quarter, and it appeared Leckner’s career night would keep on going.

Leckner didn’t do much after that, but he did finish with 229 yards rushing and four touchdowns on 23 carries, and he added three receptions for 36 yards.

Leckner couldn’t do enough to get the Grizzlies back into the state quarterfinals for the third time in school history after making it in 2009 and 2015.

BOTHELL DID NOT MAKE ANY EXCUSES

The Cougars played without leading rusher, Bryce Kooy, who suffered an injury in last week’s 24-6 win over Bellarmine Prep.

Bothell got a nice effort from Kooy’s backup, Ahmani Hopoi, who gained 75 yards rushing on 16 carries.

“We’ve played a lot of great [games], but I’m really proud of this one,” said Bainter, who is in his 22nd year leading the program. “Let me tell you why. COVID. Lowering the bar for kids has made it difficult to demand [things] from them.”

But there was some doubt, and Bainter even noticed three of his players crying in the locker room when down 28-14 at halftime.

“This is the product of not having a bar raised,” Bainter said. “We will raise your bar every time and they will respond to it. They responded to the raised bar. They came back and fought every play. I told them the only thing that will make you regret [this game] is if you play like a coward.

“And we did not play like a coward. I’m proud of our kids.”

When momentum began to shift, the Cougars kept pouring in more effort and started feeding off their fans.

“I was praying for strength,” Lacio said. “I really owe it to Luka Vincic, No. 63, my left tackle. He has more heart than I’ve seen in anyone in the world. He put that heart into me and the rest of our team, and I can’t thank him enough.”

Bainter said he doesn’t care where his team plays. That’s because he knows “The Blue Train” fans of Bothell will travel to support their team.

“Our fans are the best,” he said. “Our fans do a wonderful job. Our student body’s here dressed in blue, black and white. Our cheerleaders are the best. We have great school spirit.

“And that’s why it’s fun to play football for Bothell High School.”

Bothell’s players don’t want to let down their faithful followers.

“Our plays in the second half allowed our sideline to get excited,” Bainter said. “That was the noise we needed. That’s energy. Fans bring energy and energy makes you play well. We played well because our fans were awesome.”

Bainter hopes that energy can carry his program to its second state title to go with the 4A crown brought home in 2014. The Cougars reached the state quarterfinals for the 13th time in 18 playoff seasons. and are now hunting their sixth state semifinal berth.