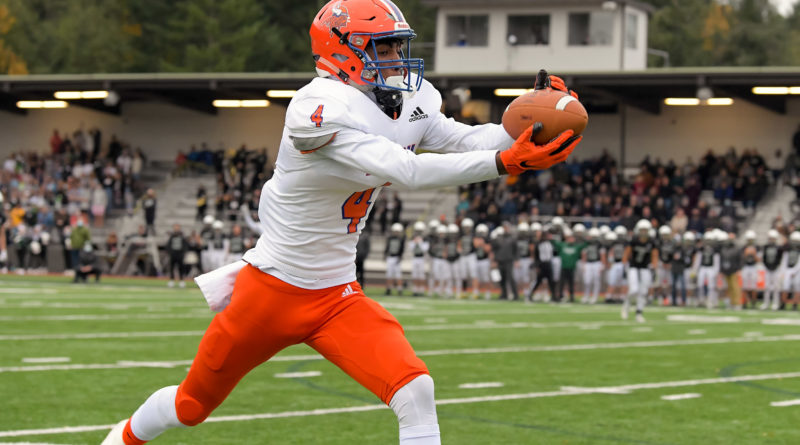 But the first deep throw from Rainier Beach High School quarterback Chance Guadiz was a thing of beauty – and from it, hope began to grow.

With the defense providing the anchor after a shaky opening 12 minutes, 42 seconds, 10th-ranked Rainier Beach hung tough early and pulled away on the strength of Guadiz’s repeated deep throws.

Guadiz, a transfer from Kentridge High School, fired four touchdown passes and finished with 253 yards on 12-of-18 accuracy as Rainier Beach turned back host Peninsula, 36-21, in the first round of the Class 3A state playoffs on Saturday afternoon at Roy Anderson Field.

“Chance was on point today,” said Rainier Beach receiver Jaelin Green, who finished with four catches for 99 yards and two touchdowns. “He was making the right reads and giving us (receivers) time to get under it or get a jump ball every time. That’s what I love to do. Just throw it up and I’m going to go up and get it every time. Nobody can jump with me. I believe that.”

Rainier Beach (6-3) wiped out a second-quarter 14-6 hole, thanks to a 57-yard touchdown strike to Caleb Presley and a high-arcing 39-yard scoring toss to the 6-foot-5 Green that were 3:19 apart in the second quarter. That pushed the Vikings from down eight points to up 20-14 with 3:14 to go before halftime.

Guadiz added another 44-yard beauty to Green, dropping the scoring pass into wide receiver’s arms over the top of a beaten Peninsula defender for a 28-14 lead with 4:43 to go in the third quarter.

The Vikings, seeded ninth in the tournament, earned the right to play No. 1 seed Bellevue (11-0) next weekend in the 3A state quarterfinals. The Wolverines, top-ranked in the final Associated Press poll for 3A schools, downed Lakes, 42-21, to move on – and now Rainier Beach takes its shot.

Here are three observations from the Rainier Beach-Peninsula game:

Whether it’s real or perceived, Rainier Beach seemingly is always playing with a huge chip on its shoulder.

And, it usually ends up raising its game as a result. Vikings coach Corey Sampson is hopeful this team can keep riding that lack of respect to the state championship game like the 2017 version of the program.

“”Do I feel we are better seed than we are?” asked Sampson, rhetorically. “Of course we are. It’s just a matter of go prove it. We are taking the same road that the 2017 team took. We came here to Peninsula (winning 37-28 in the 3A state quarterfinals).

“We had a lot of talent and we were overlooked, and we know we’ve got to prove them wrong. I feel like we’ve always got something to prove.”

Added Green: “We are always going to go out and do what we do, because everyone is always talking about how we’re not disciplined, we’re not this or that. We’ve got the refs going against us. We just play our football, stay together and prove we’re not what everybody thinks we are.”

PENINSULA PLAYS OUT GAME UNDER PROTEST

With more than two minutes remaining in the first half, Peninsula coach Ross Filkins had seen enough.

At that time, Filkins informed the referees that his Seahawks were playing the rest of the game under protest (and that later he would file an official report). No specific reason was given, but the game saw frequent stops and starts with conferences by the four game officials.

“It was because of the way the game was being administered,” Filkins said. “”t’s already been called in. But there’s not going to be a change in the outcome.”

There were long stoppages late in the first half to discuss various calls with both coaches.

Sampson said one of his conferences with the officials late in the first half was regarding one of his players, Nahmier Robinson, who was wearing a No. 0 jersey – the same number he’s worn all season.

“They wanted to throw a flag on me for an illegal number, No. 0,” Sampson said. “I told them No. 0 has been No. 0 the whole year. It’s not like I changed the number intentionally and threw him out there.”

GROUND AND POUND WITH HUMPHREY

After struggling to run the ball in the first half, Scott’Tre Humphrey helped salt away Saturday’s victory with a strong second-half showing on the ground.

Humphrey pushed Rainier Beach’s lead to 36-21 with a 1-yard touchdown plunge with 7:37 to go in the game – and the Viking defense did the rest.

The 5-foot-10, 215-pound bruiser pounded the middle of the Seahawks’ defense in the second half, racking up 139 yards rushing on 23 carries and the touchdown. He also added a couple of two-point conversion runs in the second half after gaining just 18 yards in the first half.

Humphrey proved to be the Vikings’ closer on this day as the program reached the state quarterfinals for the sixth time in school history.

“We always want to run the ball,” Sampson said.