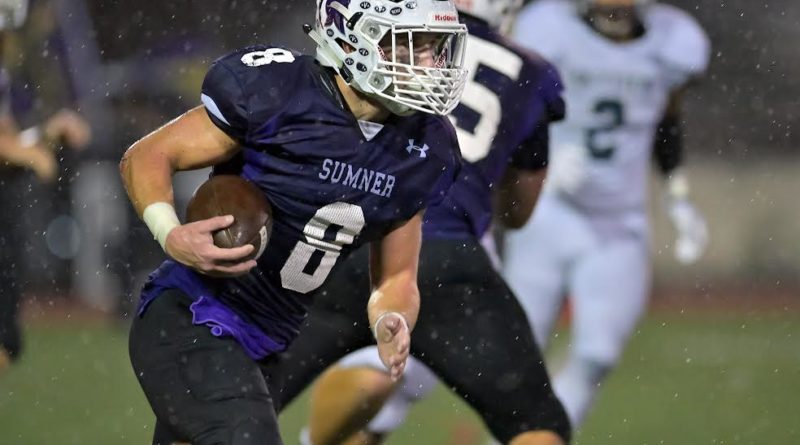 That’s the word Sumner coach Keith Ross used to describe the seventh-seeded Spartans’ 24-10 win over No. 10 seed Skyview on Saturday night in Class 4A first-round action at Sunset Chev Stadium.

“We didn’t play as clean as we would’ve liked, but we hung on and got it done,” Ross said.

The Spartans and Storm traded punts for the first three drives of the game before Sumner kicker Wyatt Redding nailed a 28-yard field goal for a 3-0 lead.

Sumner added to its lead in the first half with a 17-yard touchdown pass from quarterback Bo Carlson to Tristan Dunn and a 2-yard rushing score from Eric Buck. But until the fourth quarter, Sumner’s offense largely looked out of sync.

Here are three observations from the Sumner-Skyview game:

Before the Spartans found the end zone, the most important battle on the field was which team could pin the other deeper in its own territory.

Sumner’s first points on Redding’s field goal came on a drive that started at the Skyview 38-yard line. The Spartans’ touchdown drives, set up by Jay Mentink interceptions, started on their own 43 and 44.

Meanwhile, Skyview found itself with long fields on multiple occasions, starting drives at its own 16 and 8-yard lines.

Unable to effectively move the ball, the Storm gave the ball back to the Spartans without gaining any ground on the field – or the scoreboard.

SUMNER COULD HAVE PUT IT AWAY EARLIER

The Spartans had multiple opportunities, actually.

Up 17-0 in the first half, it looked like the Spartans were one or two drives away from being completely in the driver’s seat.

Sumner would have forced a three-and-out on Skyview’s next possession, but a facemask penalty kept the Storm drive alive.

The Spartans got the Storm to a third down again, this time a third-and-12, when Sumner was called for pass interference, once again keeping the Skyview offense on the field before Storm quarterback Niko Arriola hit Jonathan Stromberg for a 13-yard touchdown to bring the score to 17-7.

“I was really disappointed at halftime because I thought we could have put it away,” Ross said. “We let them sneak back in and gave them some momentum.”

SKYVIEW HAD ITS CHANCES, TOO

Despite everything going wrong for the Storm in the first 20 minutes of the game, they crawled their way back in and made it a one-score game at halftime – 17-10.

Skyview forced two Sumner fumbles, and blocked a punt in the second half to set itself up with great field position. But no points were scored.

“I thought we were going to at least tie it or go ahead there in the third quarter, but we just couldn’t quite get in there,” Skyview coach Steve Kizer said.

Kizer also gave credit to the Sumner defense for keeping them out of the end zone in the second half.

“They’ve got a great goal-line defense and was hard to run against. And with weather like this, it was tough to throw the ball,” he said.