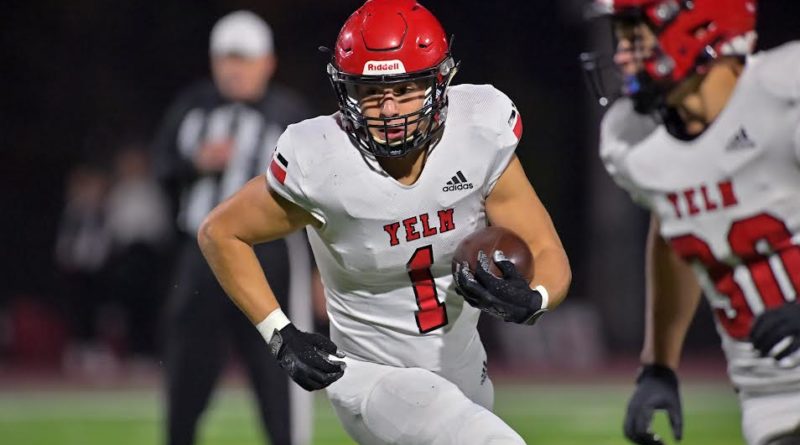 YELM – Fourth-seeded Yelm knew what it would be up against when it hosted upset-minded 13th-seed Seattle Prep in the first round of the Class 3A state football playoffs Saturday.

At the center of the Panthers’ scheme is elusive dual-threat quarterback Braeden Smith. The Tornados couldn’t stop Smith, nor did they truly contain him as he rushed for 138 yards on 23 carries, and completed 16 of 32 passes for 276 yards.

But, in the end, Yelm’s own big-play ability was more than enough to counter the Panthers’ attack, and the Tornados pulled away for a 52-28 win that will bring Marysville-Pilchuck or Garfield to town for a quarterfinal matchup next weekend.

Yelm, No. 2 in SBLive WA’s final 3A rankings, won with standout sophomore running back and linebacker Brayden Platt on the sidelines most of the game, ejected after a targeting call midway through the second quarter.  He had rushed for 92 yards on 10 carries and was a key component in the Tornados’ attempts to limit Smith.

Ronquillo had a good look at the play, and didn’t think the call was correct. He plans to send in videos and file an appeal of what would otherwise be a one-game suspension.

As they have in earlier games, running backs William Carretto and Ray Wright more than made up for Platt’s missing contributions.  Wright rushed for 93 yards and three touchdowns while Carretto had 14 carries for 112 yards and a score.

“Our offense was on point,” said Ronquillo. “We ran the ball really, really well, passed when we needed to, made some clutch plays at the right times.”

The game’s first nine minutes were scoreless, until Carretto made his first carry count, converting a fourth-down play for Yelm into a 9-yard scoring run.  Early in the second quarter, Wright — named the 3A South Sound Conference’s defensive player of the year earlier in the week — showed his offensive skill with a 17-yard scoring run.

Seattle Prep, though, cut Yelm’s lead to a single possession for the first of two times on a tough 10-yard run by Smith that made it 14-7.  When Hooper hit Aalona with a scoring pass over the middle that gave Yelm a 21-7 halftime lead, Smith countered early in the third with a 63-yard touchdown run, breaking tackles at all levels down the field.

Yelm scored on Wright’s second touchdown run. Again, Seattle Prep responded with a Smith score, this one from 13 yards away.

But with the score 29-21, Yelm got the first of two big plays that finally took the Panthers out of contention.

On the kickoff after Smith’s run, Yelm’s Aden Schaler caught the ball on his own 6-yard line, cut from the right into the middle and again to to the left sideline for a 94-yard scoring return.  A two-point conversion run by Wright made it 37-21, and Seattle Prep would never again be within a single touchdown.

“That was a great answer to their score coming out of the half,” said Ronquillo.

Yelm’s final dagger came with six minutes to go when Hooper, who had tried going deep a few times on the afternoon, threw a high-arcing pass over the Panthers’  defenders into the hands of Ronquillo, to finalize the score.

“They turned the ball over on downs, so we wanted to take a shot to put a nail in the coffin,” Jason Ronquillo said.

Hooper had hoped the Panthers would bite on Yelm fakes to create deep scoring opportunities, but when they proved too savvy, trusted his arm and Ronquillo’s feet.

“I knew Kyler was faster than anyone else on the field and threw it up there for him,” Hooper said.