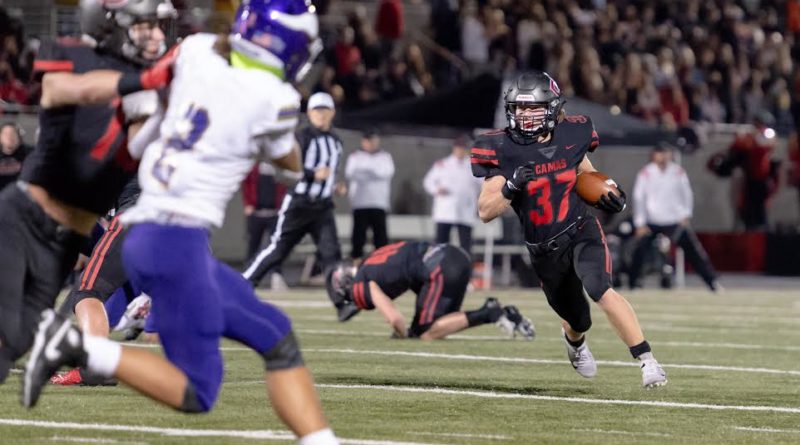 CAMAS — The defending Class 4A state champions are still alive.

In an expected defensive battle, the fifth-seeded Camas Papermakers survived 12th-seeded Puyallup with a 17-7 victory Saturday night at Doc Harris Stadium. Camas will play at fourth-seeded Kamiakin in the next weekend’s state quarterfinals.

It’s the eighth time since 2010 the Papermakers (7-4) have advanced to the state quarterfinals. Puyallup’s season ends at 8-3.

While Saturday’s 4A state first-round slobberknocker wasn’t exactly smooth sailing — the game featured 26 penalties for more than 250 yards — it was exactly what Camas expected entering the game.

“It’s who we are; it’s our identity,” Camas coach Jack Hathaway said of Saturday’s effort. “We play great defense, we’re physical and we know who we are.”

Camas allowed just 250 yards to the Vikings, which included Ryan Cramer’s 41-yard touchdown run that opened the scoring in the second quarter. The score put the Vikings up 7-0, but Camas responded with 17 unanswered points.

Ethan Ouchi’s 31-yard field goal cut the Papermakers’ deficit to 7-3 at halftime. Brock Thornburg gave Camas the lead with a 27-yard touchdown catch from Taylor Ioane on a fourth-and-2 play.

Mark Thorkelson added a 34-yard touchdown catch late in the third quarter to put Camas ahead by two possessions. He later had an interception.

Here are four observations from the Camas-Puyallup game:

Even amid an 0-4 start against Oregon’s toughest tests, it was clear Camas flew around on defense and made plays. Led by linebackers Jairus Phillips and Luke Jamison, the Papermakers make gaining yards difficult — at times, seemingly impossible.

Phillips had at least a dozen tackles Saturday.

“Defense has been a huge part of our game,” Thorkelson said. “Our offense took some time to get together, but everything is coming together now.”

While the 2019 state champion team had NCAA Division I all over the field, this year’s Papermakers rely on good old-fashioned grit. (And yes, they still have a bunch of talent).

Whether it’s Jon Schultz’s aggressive running style, a bruising offensive line or a speedy, hard-hitting defense, Camas – No. 7 in SBLive WA’s final 4A rankings – finds itself always equipped for the moment.

They also have a knack for stepping up to the plate when that opportunity comes. Brock Thornburg caught one pass — it was a 27-yard touchdown catch on fourth down. Mark Thorkelson outwrestled a defensive back for a 34-yard touchdown catch, and minutes later did the same thing on defense for an interception.

“I love our guys,” Hathaway said. “They freaking compete, and they’re tough, and they put in a phenomenal effort. We’ve got a good thing going here, and they’re a lot of fun to coach.”

It’s always hard to tell in the moment whether the schedule put together will provide the right balance of tough tests and eye-catching victories that appeal to the state seeding committees.

The seeding committee did not overlook a four-loss Papermakers’ side, and seeded them fifth. Then in a tough game where they trailed at halftime, the Papermakers controlled the final 24 minutes to seal a victory.

“0-4 was brutal. We heard it from everyone, and it hurt us,” Thorkelson said. “But we knew what we had to do. We continue to get win after win and we’re not going to stop.”

In a game that featured 26 penalties, Puyallup bore the brunt of it. With five personal fouls and an unsportsmanlike conduct penalty, the Vikings totaled 180 yards on 16 penalties.

Any time, Puyallup seemed to make a stop or move the chains, a yellow flag came flying.

It was a frustrating night for a Viking squad that finished third in the SPSL.