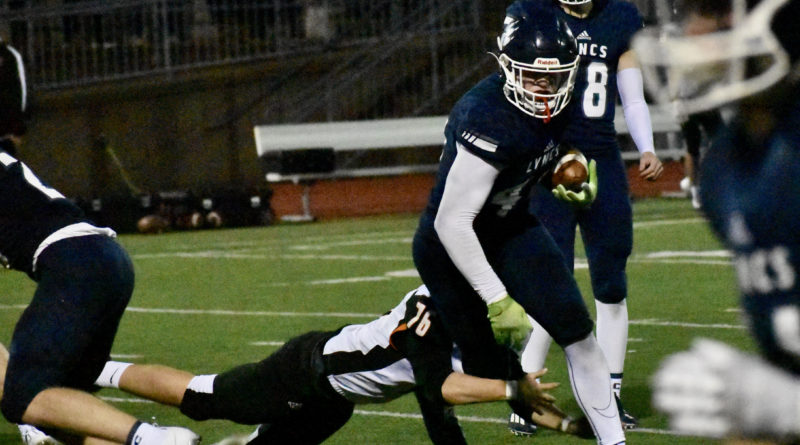 BELLINGHAM, Wash. — The question lingered on the bus ride home from Cedarcrest in mid-September as the Lynden Christian coaching staff digested the news that an injury would cost starting running back Kayden Mellema the season.

What do we do? Who will step up?

Coach Dan Kaemingk had an idea — one he hoped hoped would jolt a run game that took half the season to establish: Why not move 6-foot-5, 240-pound junior Kade Eldridge over from tight end?

He was initially taken by surprise, but Eldridge agreed without hesitation. The following week, he started at a position he hadn’t played since his youth football days.

On Friday, Eldridge rushed for three first-half touchdowns — including runs of 57 and 44 yards — in 3-seed Lynden Christian’s 50-0 win over 14-seed Granite Falls in the first round of the 1A state playoff, sending the Lyncs to the quarterfinals, where they face 6-seed Tenino next week.

He tallied 142 rushing yards on 12 carries. His third touchdown (a 24-yarder) at Bellingham’s Civic Stadium included two stiff-arms to find space up the middle and a hurdle over a defender down the right sideline.

Each week, Eldridge is becoming more comfortable reading block schemes, more intentional with his cuts and more confident in his ability to run around — and over — defenders.

“He’s just blossomed into the role,” Kaemingk said. “It’s a nuanced job. You’ve got to get a feel for it.”

Since moving over in Week 5, the Nooksack Valley transfer had tallied 350 yards on 6.7 yards per carry and four rushing touchdowns entering Friday. He nearly doubled his scoring total against Granite Falls, all in the first half.

And Eldridge’s improvement in the backfield has directly correlated with the overall impact of Lynden Christian’s offense.

After taking consecutive losses against tough bigger-school opponents Squalicum and Lakewood to open the season, the Lyncs found early success in their pass game under first-year starting quarterback Will Colwell (1,289 passing yards, 383 rushing yards, 19 total TD) and a host of talented receivers.

“We were a little pass-heavy early,” Kaemingk said. “We just weren’t there in the run game yet.”

As opponents started to catch onto those tendencies, Eldridge started establishing himself as a load-carrying back. The Lyncs, who have not been scored on since Oct. 9, felt they turned a corner in a 12-0 shutout of rival Mount Baker, the 8-seed.

The run isn’t over and Eldridge is just happy to be a part of it.

“I really like running back,” Eldridge said. “I still really love tight end. It’s tough. I’m just trying to help my team any way I can.”

Riley Hoople draws on the words “unspeakable” and “sick” to describe the feeling of helping lead the Tigers their first state playoff appearance since 1990.

The second team out of the 1A Emerald Sound League’s season ended at 7-3 in a lopsided loss to a 1A state title contender.

“That’s what we’re so proud about,” Hoople said, choking back tears. “This sucks, I know, I said it, we lost, but the fact that we got this far is a journey in itself and that’s all we’re thinking about right now.”

Hoople and his fellow seniors might not be able to envision the feeling of walking the halls of Granite Falls High School decades from now and seeing a tribute to this year’s team.

All he can do is appreciate journey of the season, which came to an end on Friday night.

“That’s the best part,” Hoople said. “That’s the part that hurts the most right now.”