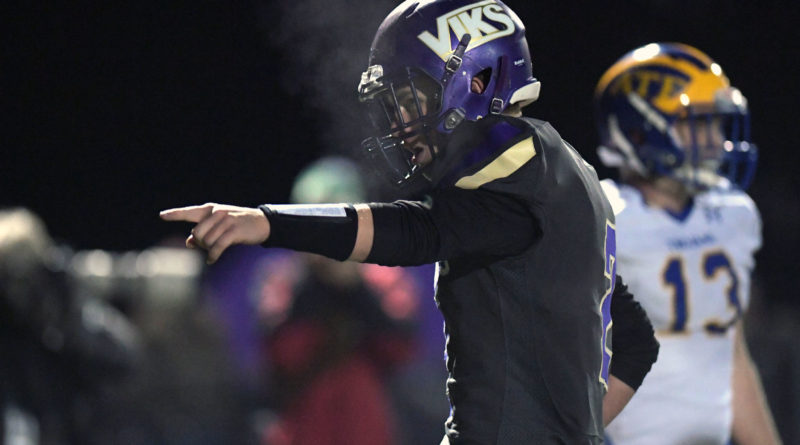 POULSBO – Even a physically-compromised Colton Bower is still better than most of the quarterbacks playing in these WIAA state football playoffs.

On Saturday, second-ranked North Kitsap relied more on Bower, the passer. And he responded with 208 passing yards and four touchdowns, and the Vikings blanked visiting 2A GSL champion Shadle Park, 42-0, in the opening round of the Class 2A playoffs at North Kitsap Stadium.

The Vikings’ defense came up big, too, on Saturday, limiting the Highlanders to 123 total yards – and one drive past midfield.

North Kitsap (10-0) will host Steilacoom in the state quarterfinals on its home field.

Here are four observations from the North Kitsap-Shadle Park game:

ONE LONG DRIVE BROKE THE DAM

For the first 20 minutes, no offense appeared ready to seize control – although the Vikings held a 7-0 lead on Bower’s 22-yard scoring strike to Lincoln Castillo early in the second quarter.

That is when Bower and company put together their finest drive of the game.

Starting at their own 8-yard line, the Vikings took 17 plays to go the distance – and cashed in on Bower’s 23-yard touchdown pass to Logan Sloman with 22.6 seconds remaining before halftime.

“We needed that drive, for sure,” Bower said.

All week, Jeff Weible and his North Kitsap coach staff preached patience on offense, and taking what the Shadle Park defense was giving – which usually meant a lot of short-gaining check downs.

“They don’t want to give up the big play,” Weible said.

And Bower was masterful in doing just that, competing two passes to running back Zach Edwards and three passes to wide receiver Alex Hitchings, all on shorter routes. They also ran it four times.

After dinking and dunking, Bower pushed it downfield to Sloman for the touchdown, and the Vikings led, 14-0, at halftime.

BOWER AND SLOMAN HAVE SPECIAL CONNECTION

This is a North Kitsap group primarily made up of seniors, led by Bower, who is headed off to Washington State University next summer on a baseball scholarship.

But with Jaxson Gore and Castillo in and out of the lineup with injuries, it is pretty obvious that Bower has struck gold with Sloman, a sophomore.

Sloman caught four passes for 70 yards and a career-best three touchdowns Saturday – all in an eight-minute span.

“He is one of the best athletes I’ve ever played with,” Bower said.

On the touchdown right before the half, Sloman caught the pass at the Shadle Park 15-yard line, and was suddenly swarmed by four defenders – except that he broke away and galloped to the end zone.

“I was expecting contact. I got hit, but did not go down,” said Sloman, who grew up as a running back. “So I turned and drove my feet into the end zone.”

He later caught scoring passes of 10 and 38 yards in the the third quarter.

Giving up the late touchdown to close the first half was a bit of a backbreaker for the two-time 2A GSL champions, whose defense really came out fast and aggressive in holding the Vikings to four three-and-out efforts on their first five drives.

Shadle Park coach Jim Mace said if the offense had done its part, especially early on, the defense would not have been on the field so often.

“Every game we go into, we think the defense will put the backpack on and carry (the load),” Shadle Park safety Liam Johnston said.

Quarterback Natreven Dickerson was held in check, completing nine of 17 passes for 57 yards (he did have a 54-yard touchdown pass to Jordan Dever called back because of a penalty) and an interception.

Running back Beckett Ensminger also couldn’t get anything going, gaining 27 yards on 15 carries. He did catch a pass – and throw a completion in the direct-snap formation.

Both are juniors and expected to return next season.

“Overall, I am proud of the performance and how the guys battled,” Mace said. “We feel pretty good where we’re at. The GSL will be a little better next year, and bring some good guys back.”

BOWER BEING MANAGED BACK TO FULL HEALTH

The one element that was not present in North Kitsap’s offense Saturday was Bower taking off on designed runs.

Two weeks ago, he came up hobbled with an ankle injury in the regular-season finale against Kingston, and was taken out. Last week, he was used just enough in a round-of-32 triumph over Renton.

On Saturday, he didn’t really let it loose, although he did pick off a Dickerson pass late in the first half from his free safety position.

With the game well in hand, Vikings coaches pulled Bower with 1:53 remaining in the third quarter, up 28-0.

“He has been getting better and better each week, and now he will have another week to rest – and get closer to 100 percent,” Weible said.